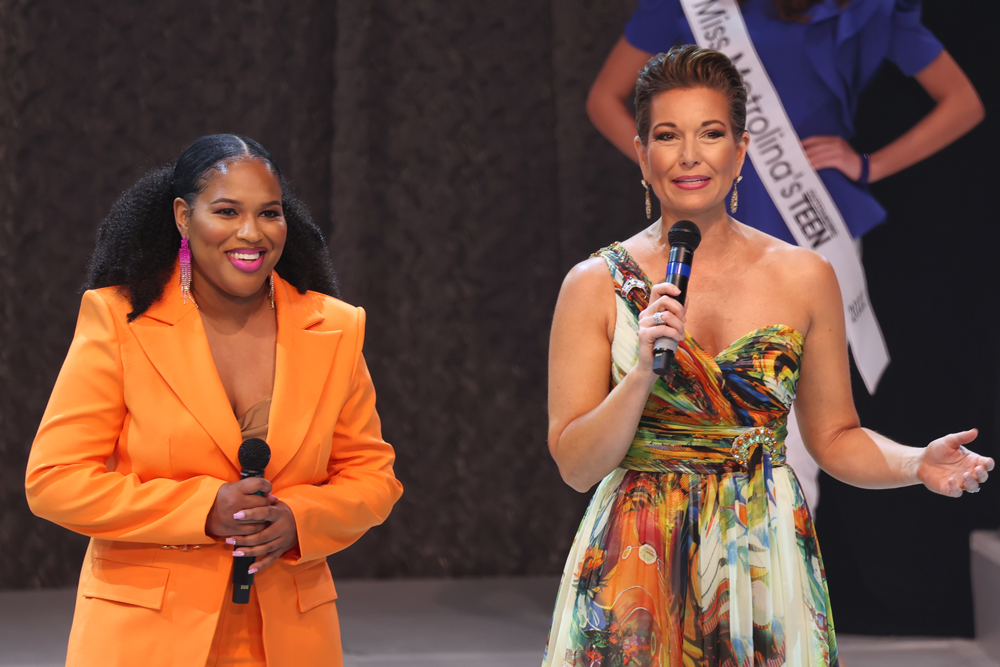 WINTERVILLE—While many headed to the coast at the start of summer, Pitt Community College’s RaSheeda Waddell travelled in the opposite direction, intent on making the most of a unique opportunity to work with the Miss North Carolina Organization.

Waddell, a specialist with Pitt’s Office of Teaching & Learning, spent June 22-25 in High Point, site of this year’s Miss North Carolina and Miss North Carolina’s Outstanding Teen competitions. For three days, she partnered with 2000 Miss America Heather French Henry to host the preliminary and final for both events – six shows, in all – at the state-of-the-art High Point Theatre.

A former contestant herself, Waddell said it was her first time on the Miss North Carolina stage in 14 years. After competing in the Miss America program as Miss Randolph County (NC) in 2005 and Miss Hampton University (Virginia) two years later, she was Miss Central Carolina (NC) in 2008 and came home with third runner-up honors and preliminary talent and swimsuit awards.

PCC Humanities Coordinator Mitch Butts, who has been involved with the Miss North Carolina Organization since 1984 and served as executive director of several pageants, recalls being “completely blown away” by Waddell’s 2008 performance of “Quando m’en vo” from the opera “La Bohème.”

“The power and sheer beauty of her voice silenced the entire auditorium; she had captivated us,” Butts said. “When she was announced as a top five finalist, I don’t think anyone was surprised.”

But Waddell says her previous pageant experiences couldn’t keep the nerves away before she took the stage in High Point for the first time last month, despite her longtime aspiration to host pageants and a warm welcome from Henry.

“Because it had been so long since I last competed and I am a much different person now, I did have some apprehension,” she said. “I wondered if people would look at me differently now that I am a different size, older, and in a different life space. I even wondered if anybody would know who I was, since I didn’t actually win a state competition.”

Waddell said her jitters quickly disappeared with the first “There’s Miss Randolph County!” and “RAH-RAH-Sheeda!” — a cheer from her competition days. She said she was asked many times if she’d be singing during her High Point visit and was “pleasantly surprised” when she received the opportunity to sing one of her all-time favorites, “Stand by Me,” during the Friday night Miss North Carolina competition.

Waddell said the chance to serve as pageant co-host came through her work as an advocate for inclusivity on the Miss North Carolina Diversity and Inclusion Council. As a member the past two years, she says she’s worked with the Miss North Carolina Organization on the basics of diversity, equity and inclusion (DEI) and facilitated a discussion on social justice and its ties to the candidates’ social impact initiatives.

“RaSheeda is an invaluable addition to the Miss North Carolina Organization,” says Bree Koegel, the organization’s chair of Diversity and Inclusion. “She brings her expertise, lived experience, talent, passion and resilience to a team that is committed to preserving a space for young women to grow their wings in their roles as leaders as they build their educational and career opportunities.”

Earlier this year, after facilitating DEI training for the 2022 Miss North Carolina pageants, Waddell said Jacob Godwin with the Miss North Carolina Organization Board of Directors reached out to her about co-hosting with Henry. As a longtime fan of the former Miss America from Kentucky, she said she couldn’t say “yes” fast enough.

“RaSheeda was a great addition to our hosting team,” Godwin said. “She brought relevance to the competition as a former competitor and has the energy to keep the show moving. She understands our mission to empower young women to achieve their academic goals, and we enjoyed having her with us in June.”

Waddell says she is excited about continuing her work with the diversity council in 2023. And should the Miss North Carolina Organization need a competition host, she’s says she’s ready to take the stage.