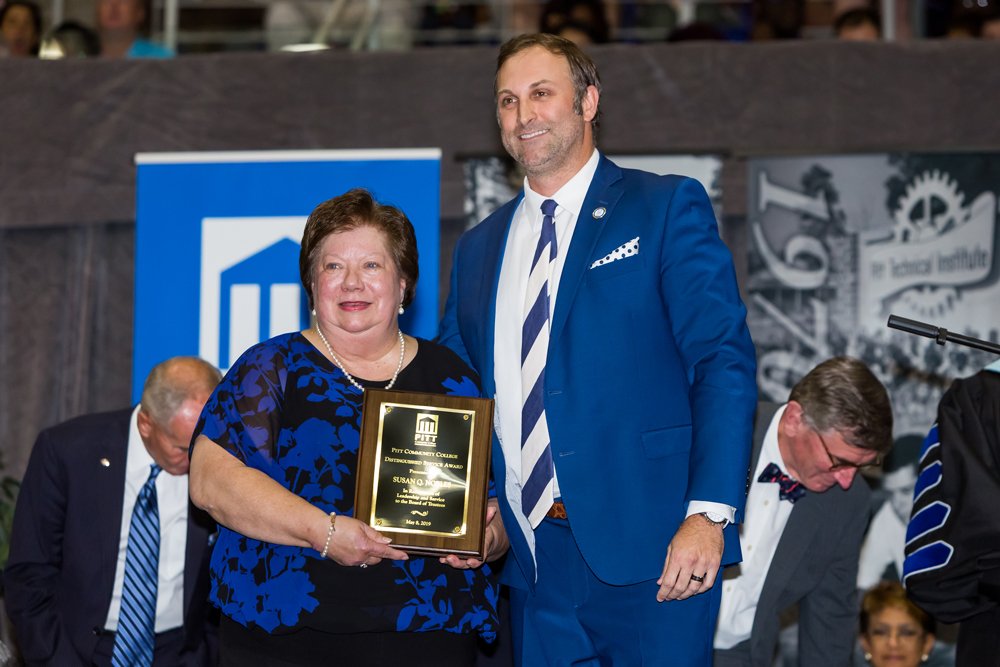 GREENVILLE—Pitt Community College Trustees took a moment during graduation Wednesday to show their appreciation to an employee who has demonstrated outstanding service to the college and community for more than three decades.

During the ceremony, trustees presented a Distinguished Service Award to PCC Vice President of Institutional Advancement Susan Nobles. Making the presentation on the board’s behalf was Miles Minges, who has worked closely with Nobles as chairman of the PCC Foundation Board.

“When speaking about the commitment and contributions to the mission of Pitt Community College and the N.C. Community College System, you will not find anyone with more heart, determination, loyalty and passion than Susan Nobles,” Minges said. “… She has been a driving force behind creating an active and visible Institutional Advancement Division.”

Nobles, who started at Pitt in 1987, oversees staff responsible for alumni relations, marketing, media relations and the VISIONS Career Development and Scholarship Program. She also works with state, local and national leaders to make sure they are aware of PCC needs and serves as executive director of the PCC Foundation, which is the college’s chief fundraising organization.

“… She has led efforts to secure gifts and donations for scholarships, capital projects, and program expansion and growth that supports our students and the college,” Minges said.

PCC named Nobles its 2014 Woman of Substance Award recipient. The annual honor goes to a female employee for demonstrating outstanding campus and community involvement, attitude of service, and willingness to ‘go the extra mile.’

“In every aspect of her job, she performs so selflessly,” Minges said. “She loves Pitt Community College and seeing our students succeed.”

PCC Trustees have presented Distinguished Service Awards during spring commencement since 1989, when they created the honor to recognize individuals for their efforts to enhance the college’s mission and services.