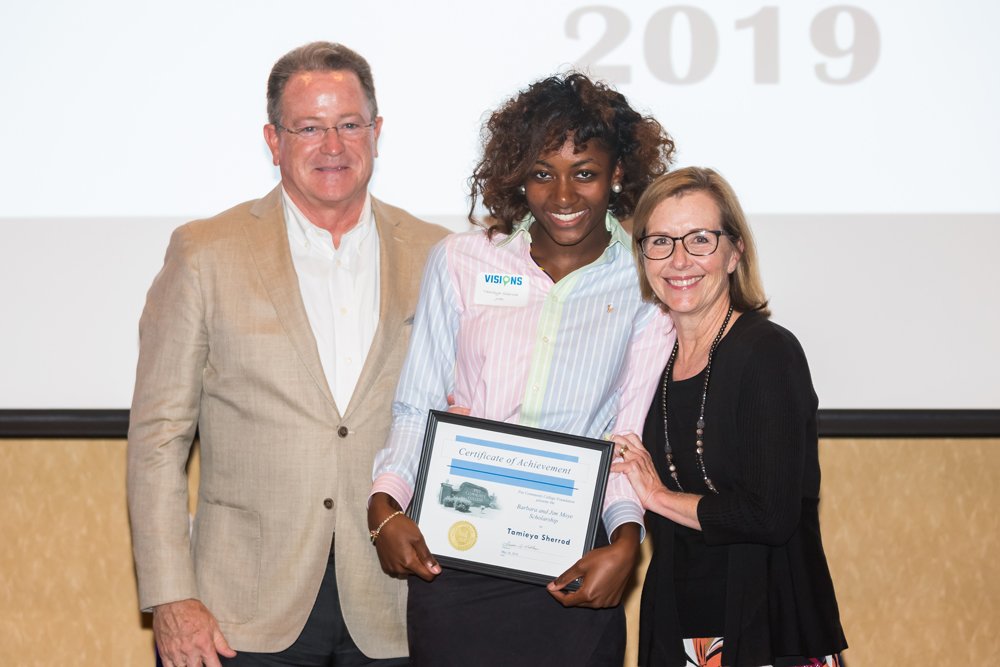 Launched in 2004, VISIONS provides select Pitt County high school students with the direction and support they need to earn diplomas and transition to higher education. Between 2005 and 2018, 97 percent of 802 VISIONS participants completed high school on time. Another 69 students—representing all six Pitt County public high schools—are expected to graduate next month.

One soon-to-be-graduate, Farmville Central High School’s Zory’a Pridgen, plans to complete an associate degree in Advertising and Graphic Design at PCC before pursuing a bachelor’s degree. Pridgen thanked VISIONS staff for the support she’s been shown through the program.

“Mr. Jim (Shallow), my advisor, has motivated me to be consistent with my dreams of college,” she said. “… I can’t thank him enough for his kind-heartedness.”

While all of the students were recognized for completing the VISIONS high school program, 21 earned special recognition for having GPAs of 3.0 or higher. Of those students, South Central High School’s Ahna Shiver received an award for most improved GPA, while South Central’s Kenya Stocks and Ayden-Grifton High School’s Caitlyn Tripp were honored for having the VISIONS Class of 2019’s highest GPAs.

Tripp, who intends to finish a business administration degree at Pitt before taking real estate classes at the college, says VISIONS has helped her get ready for higher education. “Thanks to VISIONS, I feel more comfortable with my transition to college, as well as my plans after college,” she said.

For the second consecutive year, the celebration featured the presentation of the Barbara and Jim Moye Scholarship, which recognizes a J.H. Rose student for successfully participating in VISIONS and the Taking Steps Beyond Rose program created by J.H. Rose Math Department Chair Tracey Moore and her husband, H.B. This year, the $1,000-award was presented to Tamieya Sherrod, who credited Tracey Moore for introducing her to VISIONS.

Though unsure about the program initially, Sherrod said it wasn’t long before she discovered how VISIONS could help enhance her education and future. She added that the program played a significant role in helping her endure a rigorous senior year.

“If you ask me how I made it through, I will always say God, Mrs. Moore and VISIONS,” she said.

While the graduation celebration is always a chance for VISIONS staff to thank program supporters and honor students, this year’s event gave them a chance to recognize PCC Vice President of Institutional Advancement Susan Nobles before she retires this summer.

“Mrs. Nobles has accomplished a great deal during her tenure at Pitt Community College, but I believe one of the greatest ventures she has participated in is the development of the VISIONS program,” said Hal Knox, who serves as North Pitt High School’s career development coordinator.

Simone Pate, a former Pitt County career development coordinator now serving on the PCC Foundation Board, added that Nobles has given 32 years of dedicated service and love to PCC, students and the community. “This love that Mrs. Nobles has so graciously shared over the years has carried so many students over the hurdles and fences they have faced along their roads to success,” she said.

Most of the students honored this month will move on to PCC, though some may join the military, enroll at other institutions, or enter the workforce. Those who enroll at Pitt will receive scholarships and continue receiving personal and academic counseling from college VISIONS staff.