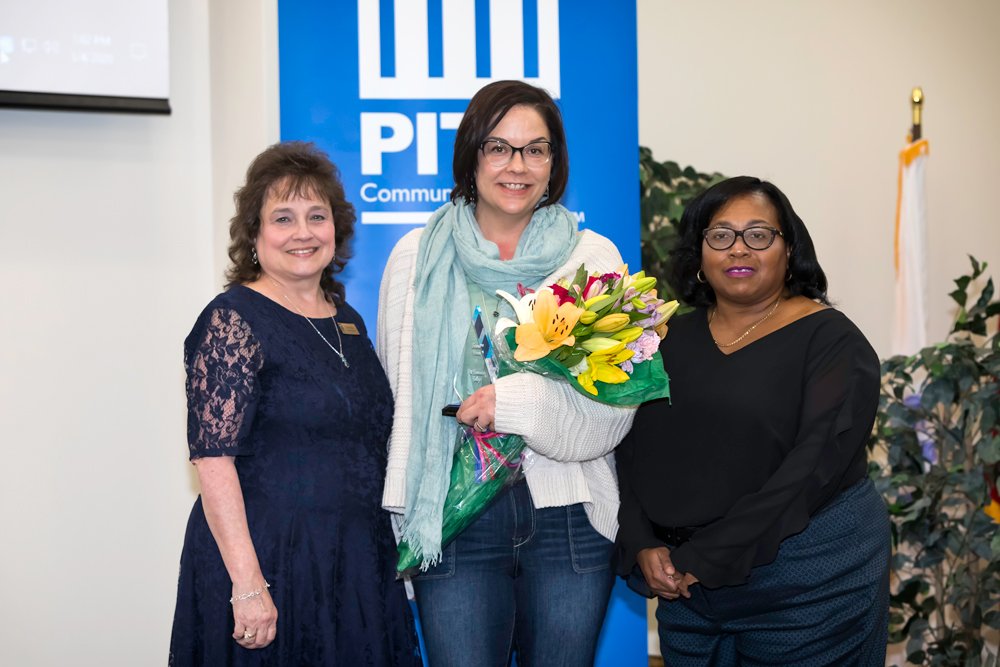 Valentine, PCC’s Associate in Fine Arts (AFA) Department chair, was one of four employees—along with Connie Blake, Katherine Clyde and Sonji Rowsom—nominated for the award, which was established during the 2001-02 academic year to recognize and encourage outstanding women role models on campus.

Before announcing the 19th-ever “Woman of Substance” honoree, PCC Vice President of Institutional Advancement Marianne Cox said Valentine and her fellow nominees were hailed by co-workers for myriad reasons. The praise, she said, centered on their willingness to go beyond the status quo to enhance college services, representation of PCC in the community, and “enthusiasm and commitment” to students, faculty and staff.

“I can truly say that PCC is a better place because of these women,” Cox said.

Valentine said much of the same upon accepting the award and added that she never thought she’d actually receive it.

“I was honored just to be nominated at all,” she told those in attendance. “But on this campus, surrounded by all of these amazing women, I just never thought I’d win. Thank you; it’s an honor.”

AFA Art Instructor Matt Amante nominated Valentine for the award, citing her dedicated work as a faculty member since 2007, service on numerous campus committees, and efforts with Farmville’s Glass Station to expand PCC’s art program. He also mentioned her active arts community participation at state and local levels, including her work with the local art council and service on the N.C. Community College System’s Associate of Fine Arts Board and N.C. Museum of Art’s “College Night” planning committee.

Originally from Salt Lake City, Valentine graduated from the University of Southern Colorado in 1995 with a degree in printmaking/fine art. She earned a Master’s in Fine Art (Photography) from East Carolina University (ECU) in 2007.

Between her educational achievements, she served in the U.S. Air Force from 2000 to 2004. Part of her service was spent at Seymour Johnson Air Force Base in Goldsboro, where she resides.

PCC has held a program each March since 2001 to celebrate the achievements of women in conjunction with the nation’s observance of Women’s History Month. The event is sponsored by the college’s Multicultural Activities Committee.

This year’s national Women’s History Month theme is “Valiant Women of the Vote,” which honors women who fought to win suffrage rights for women as well as those who continue to fight for the voting rights of others today.

Prior to the Woman of Substance Award presentation, PCC’s women’s history program featured remarks from Crystal Chambers, a professor of Educational Leadership in ECU’s College of Education. Her speech, titled “Our Voices, Our Vote,” offered a historical perspective of the women’s suffrage movement that included highlights of key figures like Harriet Tubman and Sojourner Truth, who also played pivotal roles in ending slavery in America.

The program also included a performance by students in the college’s music department and a solo by PCC Success Navigator Rasheeda Waddell.