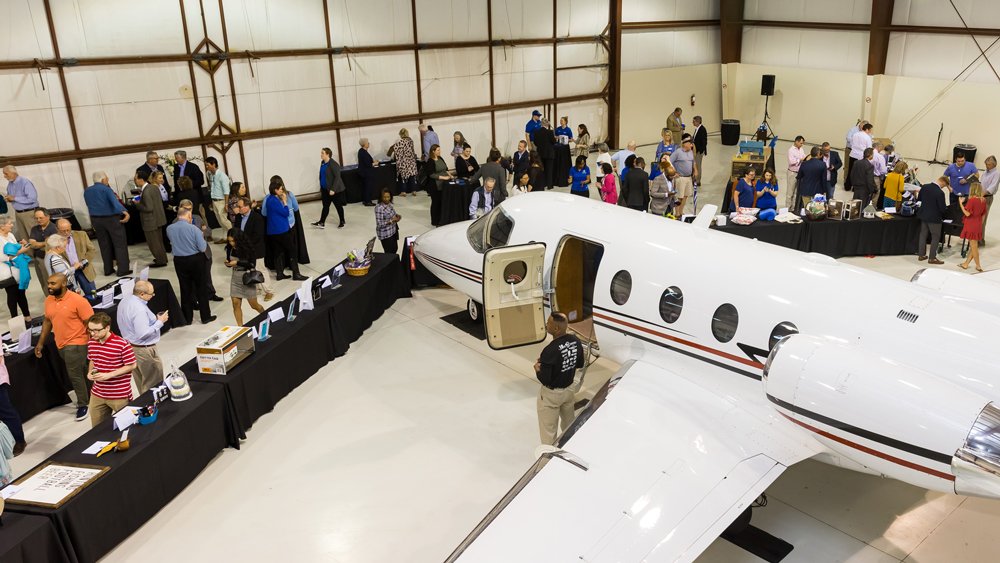 Held at Pitt-Greenville Airport March 15, more than 300 people attended the “Accelerating the Future” (ATF) fundraiser, helping raise more than $42,500 for student scholarships and educational activities at PCC. Tickets to the event, which took place in a pair of privately-owned airplane hangars, sold out more than a week in advance.

“Though donations are still coming in, it’s already been our most successful ‘Accelerating the Future’ fundraiser,” said PCC Event Specialist Erin Greenleaf. “The unique setting really provided a great atmosphere, and, based on the overwhelmingly positive feedback we’ve received, topping this year’s event will be difficult.”

The first two ATF fundraisers were held in PCC automotive labs. The inaugural event in 2015 netted $38,728 while the second raised $40,657 the following year.

“Having fundraisers on campus gives supporters a firsthand look at PCC programs, but when we were offered the opportunity to hold this year’s event at PGV, we couldn’t pass it up,” Greenleaf said. “We’re extremely grateful to Parker and Becky Overton, Eddie Smith and Pitt-Greenville Airport for their support and allowing us to use their facilities for such a great cause.”

In addition to dinner and musical entertainment, the event featured a display of cars and aircraft and a silent auction in one of the hangars. Mobile bidding for auction items gave those who could not personally attend the fundraiser an opportunity to participate.

Perhaps the most unique item up for bidding was a ‘tiny house’ built by PCC Building Construction Technology students. A Greenville resident ended up placing the winning, $25,000-bid for the 228-square-foot home, which featured a vaulted ceiling, master bedroom, kitchen and bathroom.