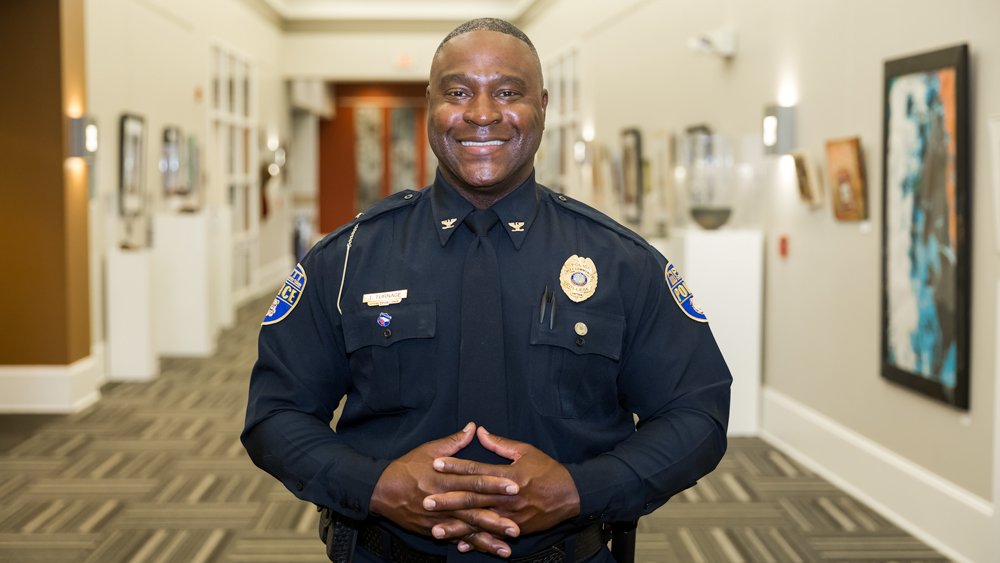 Tyrone Turnage Jr., an officer with the PCC Police Department for the past nine years, was sworn in as the department’s chief on July 31. He replaces former Chief Jay Shingleton, who retired at the end of last month after 18 years with the PCC police force.

“Even though I have known about this for about a month now, I am still at a loss for words,” Turnage said of his promotion. “PCC means the world to me, and I consider it an honor to have been entrusted with the task of objectively and impartially leading a department I have been a part of for the past nine years.”

PCC Vice President of Administrative Services Rick Owens said Turnage was the ideal candidate to become PCC’s police chief, noting his dedication to the safety, security and education of Pitt students. He also pointed out that Turnage has played a key role in providing a safe environment during many of the college’s busiest and highest-profile events, including annual graduation ceremonies and a visit by former presidential candidate Hillary Clinton in 2016.

“Pitt Community College is very fortunate to have someone as devoted to education and safety as Tyrone Turnage Jr. leading such an important campus department,” Owens said.

A Greenville native, Turnage joined the PCC Police Department in 2009. Four years later, he achieved the rank of sergeant before eventually earning his captain’s bars in 2016.

“Being promoted to chief is what I’ve been working for these past nine years, Turnage said. “After I was hired at PCC, I participated in the Leadership Institute and quickly realized that the college has made education and professional development a priority. As a result, I believed all along that if I continued learning and gaining experience that it would ultimately pay off, and it has.

“I’m excited about the opportunity to contribute to the college’s future success and that I get to bring my ideas to the table in an effort to take the campus police department to another level.”

From the start of his PCC career, Turnage said he made it his mission to get a comprehensive understanding of the campus environment and the nuances of working in higher education. He said it was a key component of the community policing strategy in which he firmly believes and plans to utilize as chief.

“I’ve always encouraged officers in our department to be visible, to network on campus, and to spend extra time getting to know students, faculty and staff along with community members and campus visitors,” Turnage said. “In my opinion, that’s community policing, and I believe it reduces the likelihood of criminal activity.”

Turnage, who was president of PCC Basic Law Enforcement Training (BLET) Class No. 87, received his BLET certificate in 2007. He started his law enforcement career with the Winterville Police Department (WPD) shortly thereafter and ended up working with WPD for approximately 18 months.

“PCC is the solid rock of my foundation,” Turnage said. “It has opened many doors of opportunity for me – some I never knew existed – and invested in my development as a law enforcement officer. As chief, I will constantly strive to repay PCC for believing in me and my fellow officers by endeavoring to maintain a campus environment conducive to learning in a positive manner.”