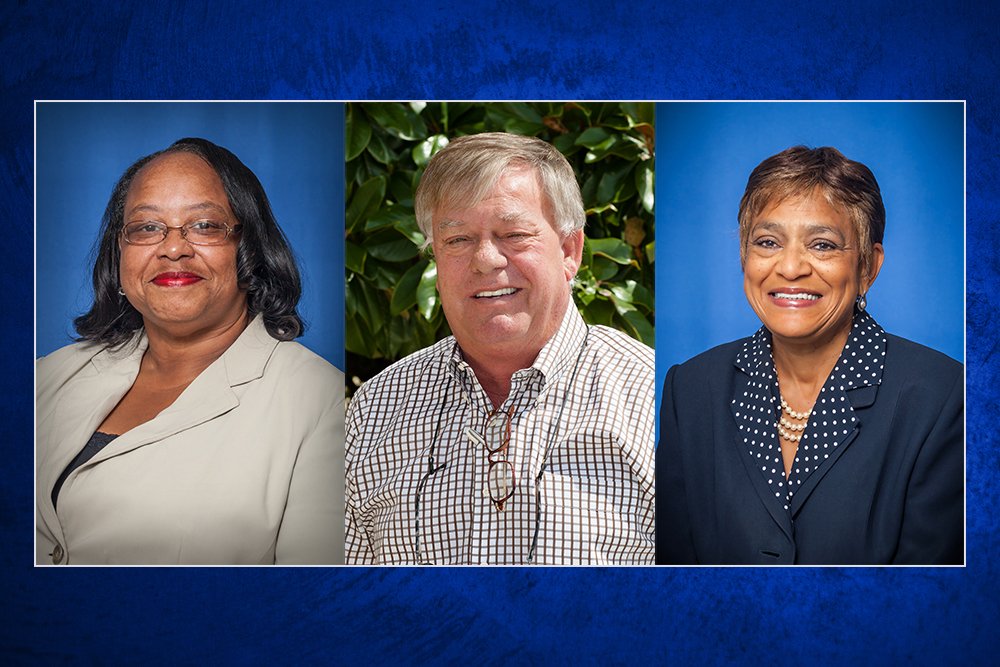 WINTERVILLE—The Pitt Community College Board of Trustees held a special meeting Tuesday to swear in new and re-appointed members and discuss the latest plans for the 2020 Fall Semester.

The meeting, which took place on campus and virtually (due to social distancing protocols), was the first for newcomer Lindsey Griffin, former owner of a Greenville landscaping company with 30 years of experience in the construction field. Griffin, a longtime PCC Foundation Board member, was recently appointed by the Pitt County Board of Education to replace Charles Long, who retired last month after 13 years of service.

“I’m honored to have been selected to the PCC Board of Trustees,” Griffin said. “I’ve spent a lot of time at PCC, having served on the foundation board for 15 years, so it’s obvious I have a passion for Pitt Community College. I also think a lot of President Lawrence Rouse. I think he’s a great asset to PCC, and I want to do what I can to see him succeed.”

Also sworn-in were Gloristine Brown, who has served as Bethel’s mayor since 2014, and Winterville’s Shirley Carraway, whose professional background includes educational administration and speech therapy. Brown became a trustee in 2016, when she was appointed by Pitt County Commissioners, while Carraway joined the board in 2017, after being appointed by the Governor’s Office. Both Brown and Carraway were reappointed for four more years.

Trustees also selected officers for the 2020-21 academic year, unanimously choosing 1984 Pitt graduate Gary Evans to return as the board’s chairman for another year. An Ayden resident, Evans served as a PCC trustee from 2003 to 2010 before re-joining the board in 2017 to replace the late Walter Williams. He was the board’s chairman from 2007 to 2009 and returned as chair in 2019.

Also selected as officers were Brown, who will serve as vice chair, and Greenville attorney Charles Ellis, who will be the board’s secretary. Both were approved by unanimous vote.

Tuesday’s meeting featured an update from President Rouse, who told trustees the college’s plans for returning to campus this fall have changed, due to the ongoing coronavirus pandemic. Rouse said PCC’s fall classes will be taught through distance education for the most part, rather than the traditional classroom. Some classes will have a hybrid format, he said, meaning they will take place online and occasionally in person, with enhanced safety measures in place.

“The current situation with the virus will not allow for a return to campus this fall as we had hoped,” Rouse said. “The President’s Leadership Team and I are simply trying to make sure we keep faculty, students and staff safe as we provide educational services.”

Rouse also informed the board of the NJCAA’s decision to postpone intercollegiate athletics until the spring semester. The move, he said, affects all four of Pitt’s athletic teams but women’s volleyball and men’s basketball, in particular. Volleyball normally starts in August, while basketball usually gets underway with practices in October.

“We’re not turning the athletes away,” Rouse said. “We’re welcoming them to campus this fall and hope they’ll come in and focus on their grades for when they do return to competition. But there will be no sports at PCC this fall.”

Despite the difficulties presented by COVID-19, PCC saw an 11 percent increase this summer in FTE, which is an enrollment measurement used to determine funding for the state’s 58 community colleges. Enrollment for the fall semester is also trending upward, as more than 200 additional students have signed up for PCC courses, compared to the same point a year ago.

Rouse said the college is adding a new continuing education training option that will begin this fall through a partnership between PCC and Walk West, a Raleigh-based agency with expertise in a variety of digital technology areas. The courses, he said, will be self-supporting and cover topics, such as social media eLearning, entrepreneurship, and diversity and inclusion eLearning.