Student Recaps Trip to Swim with Sharks in Hawaii 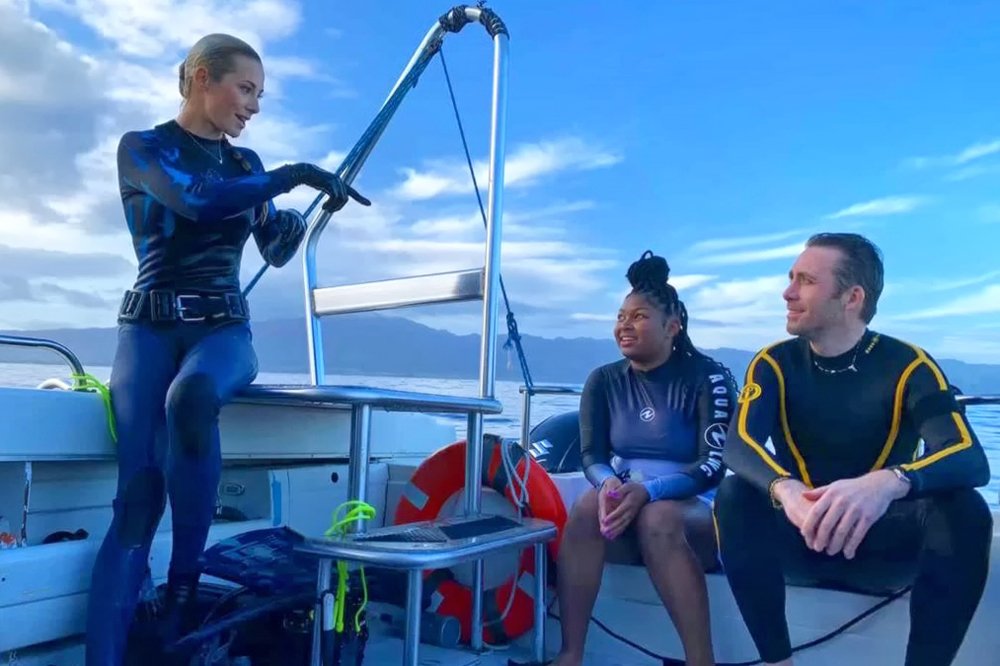 WINTERVILLE—Fresh off an all-expenses-paid trip to Hawaii, Pitt Community College student Ivanya Johnson was absolutely beaming as she described swimming with sharks in crystal clear waters during filming for an upcoming television show.

For most people, being within an arm’s length of 40 fish sporting rows of razor-sharp teeth would relegate Hawaii to a list of places never to return, but that’s not the case for Johnson. The 18-year-old Snow Hill resident is pursuing her life’s goal to study marine biology and make a career of shark preservation, and she couldn’t have been happier discussing the sandbar, Galapagos, oceanic blacktip and scalloped hammerhead sharks that made their acquaintance.

“It was much better than I expected, getting so close to sharks and learning more about them, including four species I had never seen before,” she said.

Johnson, who’s taking her second organic chemistry class at PCC in addition to coursework at Greene Early College High School, traveled to Hawaii with her mother in mid-January. The trip came a little more than a month after learning she’d won Xploration Station’s 2019 #StudentExplorer competition.

In Oahu, Johnson joined conservationist Philippe Cousteau Jr. and OneOcean Diving on a pair of free dives with sharks. Camera crews captured the adventure for an episode of Xploration Awesome Planet to air on Fox this spring.

“That was fun, seeing how the filming takes place,” Johnson said. “I enjoyed meeting the conservationists and talking with them about why they got into conservation, what motivates them, and getting to know them more personally.”

For as long as she can remember, Johnson’s been fascinated with sharks and committed to their protection. Though she knew many species were endangered, she didn’t know just how significantly some shark populations had decreased, until her Hawaii visit.

Johnson’s venture began Jan. 14 with a 12-hour flight to Honolulu. On the way to Turtle Bay Resort after arriving, she met the film crew and learned about Hawaiian history.

Cousteau arrived the next day, and filming began. “(Philippe) was very informative and passionate about his work and getting people involved with conservation,” Johnson said. “He was also very funny, always cracking jokes between shoots. I felt like I’d known him and the camera crew for years.”

Day three got underway at 5:30 a.m. with a trip to OneOcean Diving in Haleiwa. There, Ocean Ramsey, a shark conservationist and the dive tourism company’s owner, provided safety tips, including no splashing around or touching sharks and instructions for entering the water softly.

After that, it was ‘anchors aweigh,’ to a site three miles offshore where sharks naturally congregate. Wearing new diving equipment from Aqua Lung, a company co-founded by Emile Gagnan and Cousteau’s famous grandfather, Jacques, Johnson said she could see “about 20 sharks” swimming near the water’s surface once the boat arrived.

During her dives, Johnson says she could hear humpback whales singing from miles away as she ventured to depths of 15 feet. She made it a point not to blow bubbles, explaining that it attracts curious sharks wanting to determine if their visitors are a threat.

“It was so amazing,” Johnson said of her diving experience. “I wasn’t nervous; I was just so excited. I’d been diving before and seen sharks. But with free diving, you’re so close.”

Back in North Carolina, Johnson says her Hawaii adventure is motivation to continue pushing toward her dream career, which includes starting either a business or non-profit organization to encourage minorities to consider marine biology careers.

This May, Johnson will earn three associate degrees from Lenoir Community College, around the same time she receives a high school diploma. And even though she’s not sure where she wants to attend college for a bachelor’s degree, it’s a safe bet there’ll be an ocean nearby.