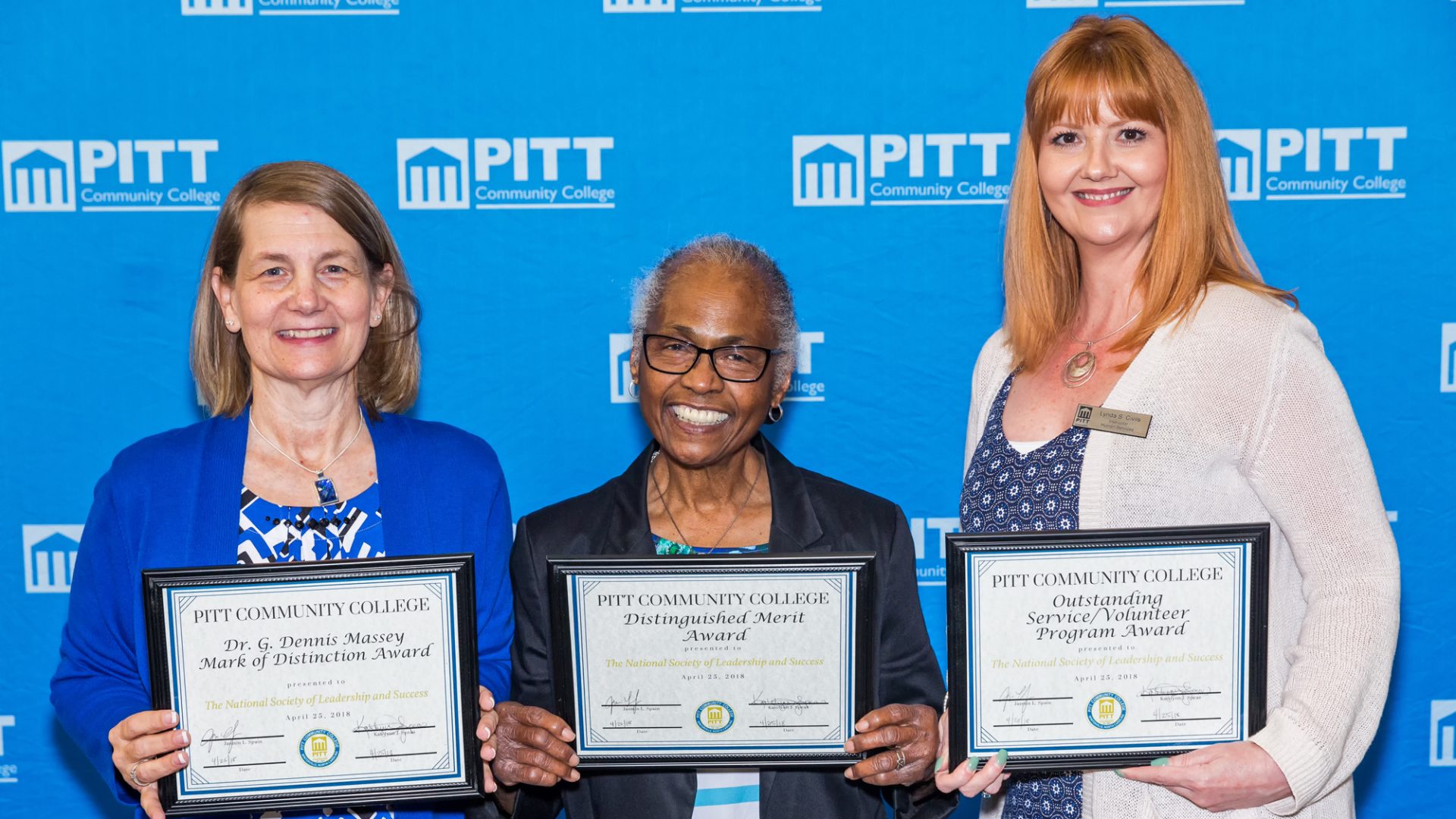 WINTERVILLE—Pitt Community College student clubs and organizations received well-deserved recognition this month for outstanding service to campus and the community during the 2017-18 academic year.

Held April 25, the 3rd Annual Student Talent and Recognition (STAR) Awards featured a combination of organizational awards and, for the first time since the program was established in 2016, individual honors.

In welcoming attendees to the event, PCC Vice President of Student Development Services Johnny Smith said the STAR Awards program is an opportunity to recognize students and their participation in groups that “not only help them get settled into campus life but help them complete their programs of study as well.”

PCC Student Activities Coordinator Katelynn Speas said Pitt offers more than 40 student clubs and organizations. They represent a variety of interests, ranging from service groups and social organizations to faith-based organizations and those dedicated to music and entertainment, she said.

Speas, who teamed with PCC Assistant Vice President of Student Development and Community Standards Jasmin Spain to create the STAR Awards, told this year’s honorees, “You all are stars in your own way. Work to constantly engage students around you and help them find their home at PCC.”

The big winner this year was the college’s National Society of Leadership and Success (NSLS) chapter, which claimed the Dr. G. Dennis Massey Mark of Distinction Award, the Outstanding Service/Volunteer Program of the Year, and a Distinguished Merit Award.

Named for PCC’s president since 2003, the Mark of Distinction Award was given to NSLS in recognition of its overall commitment to serving its members, the college, and the community through events and programming.

The Outstanding Service/Volunteer Program of the Year was awarded to NSLS for being a campus and community resource. In presenting the honor, PCC Lead Communication Instructor Josh Matthews noted that the term “resource” can have several meanings, including donations, tutoring, and organizing volunteers to carry out service projects.

“The consensus,” Matthews said, “is that they all entail sacrificing one’s time for the cause of something greater.”

Along with NSLS, Distinguished Merit Awards were presented to NEXT Level and PCC’s Beta Nu Upsilon chapter of Phi Theta Kappa (PTK) Honor Society. Considered the premier STAR Awards honor, Merit Awards are given to organizations that demonstrate an ongoing commitment to excellence in programming that utilizes the college’s mission and emphasizes leadership responsibilities in order to grow.

NEXT Level, a mentoring program for minority males at PCC, was also named this year’s Outstanding Philanthropic Program. The award highlights the importance of touching lives through contributions directed toward those in need.

This year’s First Generation Award was presented to Maria Ramos Balderas, an accounting major and Dean’s List student with a 3.88 GPA. The honor is presented to a member of the 2017-2018 graduating class who has demonstrated a record of personal achievement, service and scholastic attainment and is the first in his/her family to earn an associate degree.

Earlier this spring, Balderas was one of select group of students to receive an Academic Excellence Award from PCC. The president of Pitt’s PTK chapter and a member of Gamma Beta Phi Society and NSLS, she also won the Business Division Award during the Academic Excellence Awards ceremony and has volunteered with the PCC Foundation’s Down East Holiday Show, Adopt-a-Highway and the Samaritan’s Purse shoebox collection.

University Transfer student George Cherry Jr. received the Outstanding Leader Award for making a significant impact on campus through effective leadership, building valuable relationships, being passionate about his duties, and wholeheartedly serving campus and the community.

A PTK and NSLS member, Cherry has a 3.59 GPA and is the president of PCC’s Answering the Call Christian Club. He won an Academic Excellence Award this spring along with the Arts and Sciences Division Award and was recently selected to serve as North Carolina’s vice president of the Carolinas Region of PTK.

Leah Edgar, an Occupational Therapy Assistant student and Gamma Beta Phi member, was presented with the Outstanding Student Employee Award. Edgar, who works as an administrative assistant in the college’s Student Success Center, was nominated by a PCC employee and earned the award for contributing greatly to the mission of the center and college through reliability, quality of work, initiative, attitude, and uniqueness of her contributions on the job.

This year’s STAR Awards also included recognition of students who spent their Spring Break vacations in service to the community. Each student received a certificate in commemoration of their volunteerism.

“We had more than 55 students volunteer over 170 hours of services to the Pitt County community March 27-29,” Speas said. “We had the opportunity to spend two days at The Refuge camp in Ayden, pulling weeds, tilling flowerbeds, and planting new flowers for their upcoming summer camps.

“We also had the opportunity to serve at the Central-Eastern North Carolina Food Bank, packed 740 boxes for local senior citizens, and sorted more than 2,500 pounds of non-food items that had been donated.”