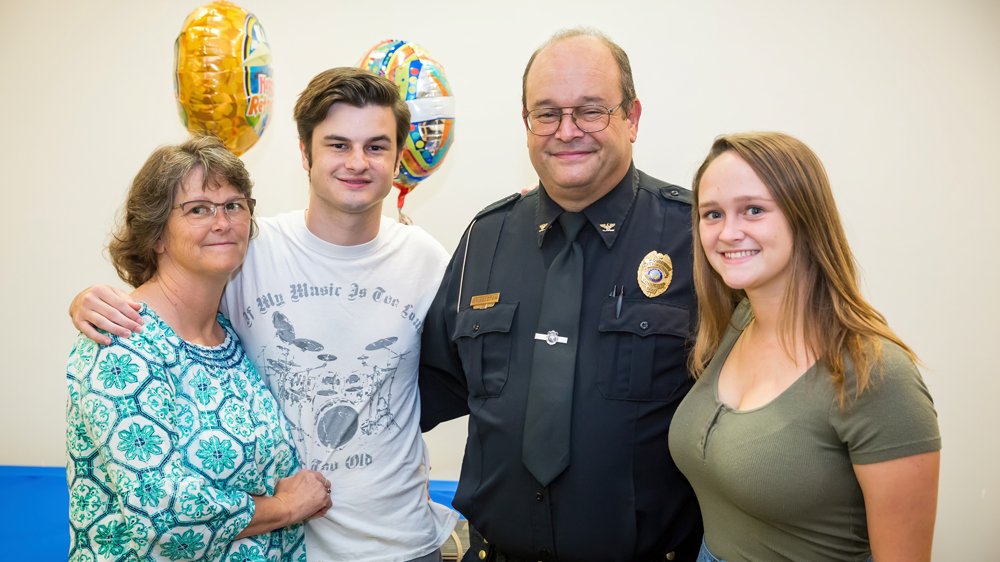 Shingleton, a member of the campus police force since May 2000, retired July 31, handing over the baton to Officer Tyrone Turnage Jr., his friend and colleague the past nine years. In tribute to Shingleton, Turnage was sworn in as PCC police chief during his former boss’s retirement reception on campus.

“Chief Shingleton was an inspirational leader and great asset to this college, and we will dearly miss him,” Turnage said. “It is bittersweet for me to become chief and no longer get to work side-by-side with my friend, but his retirement is something that he has been looking forward to for a while. We are very happy for him and his family and wish him nothing but success in his future endeavors.”

A 2000 graduate of PCC’s Basic Law Enforcement Training program, Shingleton served as a patrol officer, sergeant and captain at Pitt before taking over as chief when Alan Edwards retired in 2013. At the time, Edwards said his successor had natural leadership ability and would provide a “calming influence during stressful situations.”

As it turned out, Edwards was spot-on.

“Chief Shingleton met with countless individuals over the years to ease their fears and ensure them that he and his fellow officers were doing everything possible to ensure their safety,” Owens said. “And when a situation called for action, Chief Shingleton stepped forward.”

Shingleton says his future plans include traveling with his wife, Kristi, and spending time with their three children.