President Participates in Events to Meet Students and Employees 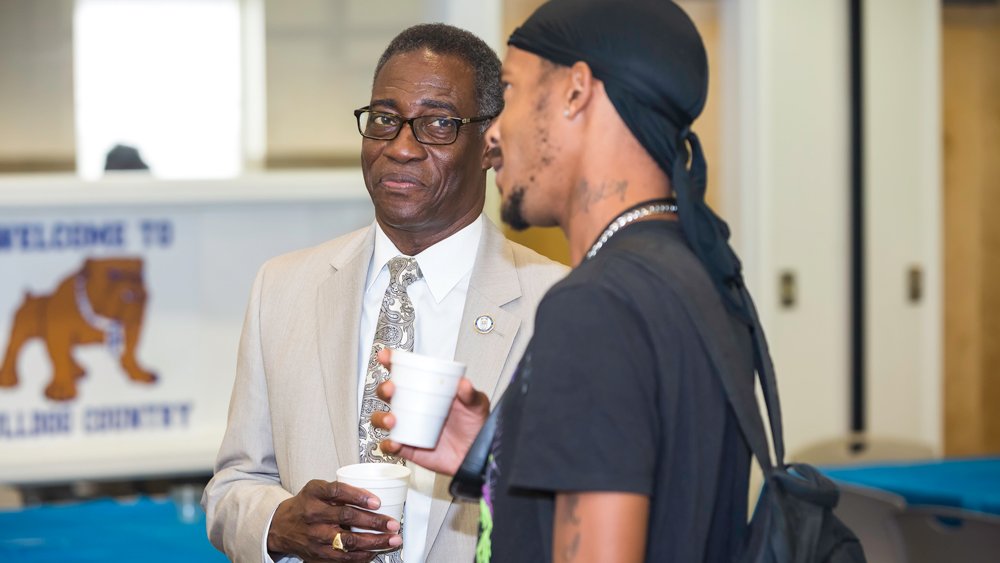 WINTERVILLE—Pitt Community College President Lawrence Rouse had breakfast with students Wednesday morning as part of an event welcoming him to campus.

According to PCC Student Activities Coordinator Katelynn Speas, The President’s Breakfast gave students a chance to meet Rouse and put a face with a name they’ve heard often since he became president Aug. 1.

For Rouse, it was an opportunity to hear directly from students about their interests and educational goals. He said it also gave him a chance to emphasize the importance of completing programs of study.

“I encouraged them to finish what they’ve started at PCC,” he said. “I told them how I wanted to be able to shake their hand after they cross the stage at graduation.”

First-year Criminal Justice student Eric Leatherwood was one of the many students who stopped by to meet Rouse. The Las Vegas native said he is enjoying his PCC experience and was impressed that the president was genuinely interested in learning more about him.

“He wanted to hear from me about me,” said Leatherwood, who is pursuing a career as a crime scene investigator.

Wednesday was particularly busy for PCC’s new president. Following the breakfast, he helped the PCC Foundation kick off its 2018 Employee Annual Fund with the Fair Share Donor Appreciation Luncheon. Pitt employees are considered “Fair Share Givers” if they donate one percent or more of their salary to the foundation.

Rouse’s next stop was the inaugural “World’s Greatest Vernon White Front Porch Party.” Held on the front steps of the oldest building on campus, the event showcased the college’s study abroad opportunities.

PCC Dean of Public Services and Fine Arts Dan Mayo helped organize the event as co-chair of Pitt’s Global Education Committee. He said part of PCC’s mission is educating and empowering students for success in a global economy.

“PCC administrators made a commitment many years ago to globalizing curricula and creating study abroad opportunities,” Mayo said. “As a result, there’s a number of international education options available to our students, and the ‘front porch party’ was a fun way of introducing them to those global learning initiatives.”