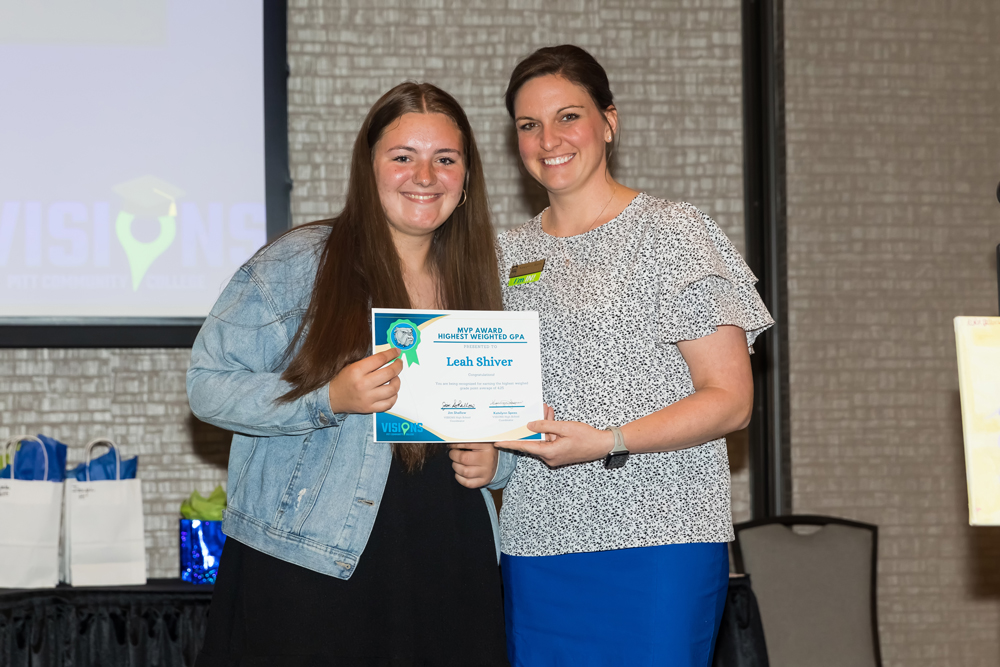 The annual event, which took place May 12 at the Hilton Greenville, included students sharing how VISIONS had helped them personally, awards, and words of encouragement from VISIONS staff and key program partners — the PCC Foundation, Eddie & Jo Allison Smith Family Foundation, and Pitt County Schools.

Launched in 2004, VISIONS provides select Pitt County high school students with the direction and support they need to earn diplomas and transition into higher education. Between 2005 and 2022, 98% of 1,118 VISIONS participants completed high school on time. Another 71 students — representing six Pitt County public high schools — are expected to graduate in June.

While all of the students celebrated this month were recognized for completing the VISIONS high school program, 17 earned special recognition for having unweighted GPAs of 3.0 or higher by the end of the current academic year’s first semester. Of those students, South Central High School senior Leah Shiver, received an award from VISIONS for having a 4.25 weighted GPA — the highest among this year’s high school participants.

“VISIONS, over the past 18 months, has given me hope,” she said. “I didn’t have a clear direction of where I wanted to go after high school. VISIONS has given me tools and advice that will help me all the way through college and will continue to help me through life.”

Shiver says she is planning to pursue an Associate in Fine Arts from PCC before transferring to a four-year college or university.

Like Shiver, VISIONS helped Linda Villegas discover her post-secondary plans. The D.H. Conley senior said touring the PCC campus as part of the 2021 VISIONS Summer Institute opened her eyes to “so many cool and interesting things you could do with your hands,” including careers in welding.

“I had the chance to actually weld something [during the tour], and right then, I knew it’s what I was meant to do; I fell in love immediately,” she said.

Villegas says she enrolled in welding classes through her high school to learn more about the field and ended up gaining more confidence in her decision to pursue a welding credential at Pitt.
“I enjoy the fact that I can be really creative with welding, and there is job security in this field with good pay,” she said.

Villegas was one of 18 VISIONS participants recognized for GPA improvement during their time with the program. In fact, she made the most improvement among her VISIONS peers — more than two-tenths of a point — to earn the program’s “Most Improved GPA Award.”

“(It’s) an incredible achievement, especially during a pandemic,” said PCC VISIONS High School Coordinator Jim Shallow. “It is not easy to bring your grade-point average up during junior and senior year, but they did it and we are beyond proud of their hard work.”

Also honored during this year’s celebration was future PCC Automotive Systems Technology student Christopher Keel, who received the Barbara and Jim Moye Scholarship. The $1,000-award recognizes a J.H. Rose student each year for successfully participating in VISIONS programming while still in high school.

VISIONS High School Coordinator Katelynn Speas said Keel earned the scholarship through consistent participation in VISIONS seminars and events over the past 18 months.

While some of the students honored this month will join the military, enroll at other institutions or enter the workforce, most will move on to PCC this fall. Those who do will receive scholarships and continue receiving personal and academic counseling from college VISIONS staff.