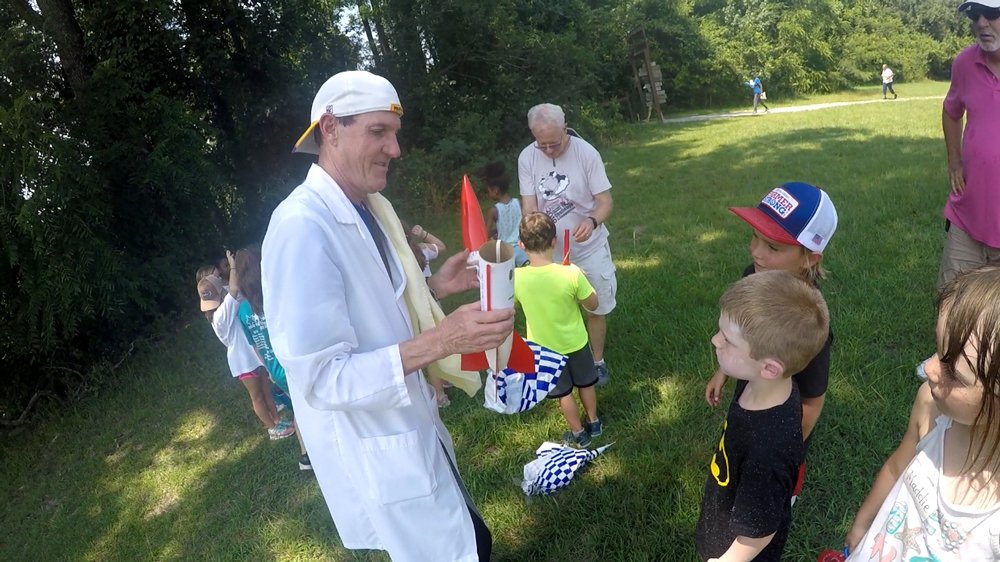 On the morning of July 16 – five decades after astronauts Neil Armstrong, Buzz Aldrin and Michael Collins lifted off from Florida’s Cape Kennedy on their way to the moon – student Kip Sloan launched three model rockets from A Time for Science’s Grifton Nature & Science Center. Joining him for the launch were club advisors Robert Neil and Brian Gray and a group of children participating in a summer science camp.

“All three rockets flew perfectly and were recovered undamaged,” Sloan said. “The children were fascinated by it all and enjoyed seeing inside the rockets.”

Sloan, who built the rockets, said one model was a 1/100th-scale replica of the Saturn V rocket that sent Armstrong, Aldrin and Collins into outer space on the morning of June 16, 1969. The other, he said, was a hand-built replica of the German V-2 rocket—considered an ancestor of larger modern-day rockets and launch vehicles—that he decorated to honor the Looney Tunes cartoon character Marvin the Martian.

“We are very happy that the rockets flew right but disappointed that none of these day campers had ever heard of Marvin the Martian,” Sloan joked. “Model rockets are an inexpensive and rewarding hobby, and it can entertain others. The desire to build and paint better keeps it interesting. You can never master it, but you can get better every build.”