Pres. Rouse to be Inducted into Alma Mater’s HOF 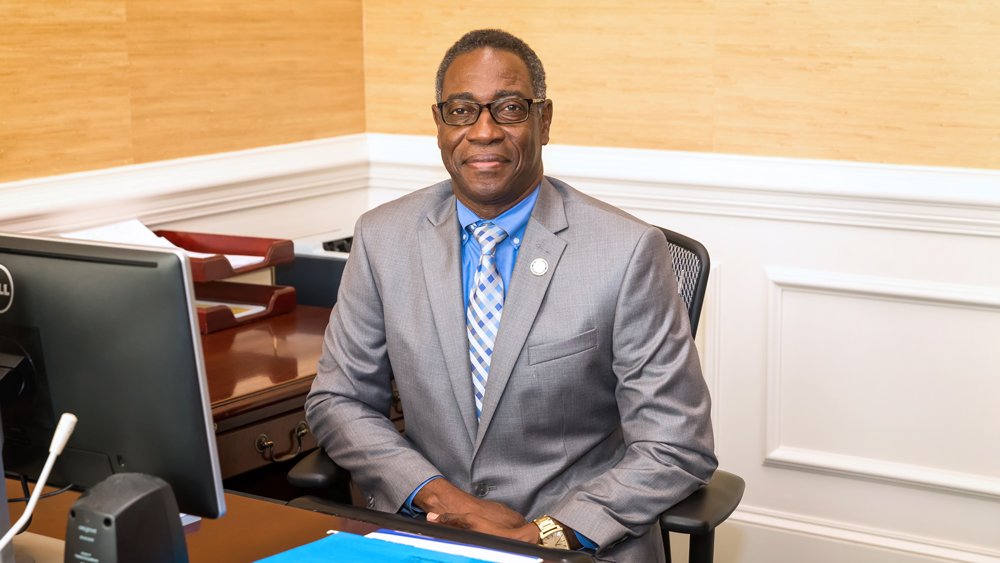 WINTERVILLE—Pitt Community College President Lawrence Rouse, a Voorhees College graduate, will be inducted into his alma mater’s Hall of Fame this month for outstanding contributions and service to the community.

A South Carolina native, Rouse joins Willie Abney, Zelma Coleman, Anson Garlington, and Sandra Thompson-Smith as members of the 2020 Hall of Fame class. The group will be honored during Voorhees College’s 18th Annual Hall of Fame Induction Ceremony on Nov. 13.

The ceremony, which is part of Voorhees’ weeklong homecoming celebration, will take place virtually due to COVID-19 health safety protocols. It will be streamed live on Voorhees College’s Facebook and YouTube social media sites, starting at 6 p.m.

“I have many fond memories as an undergraduate at Voorhees College, and looking back upon that time in my life, I realize the positive impact my alma mater had on me,” said Rouse, who will also serve as grand marshal of Voorhees College’s virtual homecoming parade. “I am fortunate to have attended an institution that cared about students and helped them develop to their fullest potential.

“I am humbled to be selected as a member of the 2020 Voorhees College Hall of Fame class and to serve as the homecoming parade’s grand marshal.”

Rouse, who is only the fifth president in PCC’s nearly 60-year history, was hired following a nationwide search to replace former President G. Dennis Massey after he retired in 2018. He joined Pitt—currently North Carolina’s sixth-largest community college in terms of student credit hours—from James Sprunt Community College, where he served as president and CEO for 13 years and was named the N.C. Community College System’s “President of the Year” in 2016.

In addition to his PCC responsibilities, Rouse is a member and former president of the N.C. Association of Community College Presidents. He is also a member of the Greenville Noon Rotary Club, Greenville-Pitt County Chamber of Commerce, Greenville ENC Alliance, and serves as the 20th regional director of Phi Beta Sigma Fraternity, Inc.’s, Southeastern Region.

PCC Trustees Chairman Gary Evans congratulated Rouse on his Hall of Fame achievement and said it was well-deserved. Evans was a member of the presidential search committee that proposed Rouse’s hire at PCC and says the college was “very fortunate” to find him, just 53 miles away in Kenansville.

“Dr. Rouse’s knowledge and experience within the N.C. Community College System has been outstanding for PCC,” Evans said. “When he arrived, he hit the ground running and made sure the college didn’t miss a beat in terms of fulfilling its mission. His passion for student and employee success is one his strongest assets, and it’s been an honor for me to serve alongside him.”

After receiving a bachelor’s degree in sociology from Voorhees in 1978, Rouse earned a master’s degree in education from the University of South Carolina in 1992. He completed a doctoral degree in adult and community college education in 1998 at N.C. State University, where he was one of four South Carolinians selected to receive a prestigious Kellogg ACCLAIM Fellowship. His academic achievements also include a National Leadership and Institutional Effectiveness Fellowship as a graduate student.

In all, Rouse has spent nearly 40 years as a community college administrator. His career includes work as Dean of Students at nearby Johnston Community College and Associate Vice President for Enrollment Management/Dean of Students at South Carolina’s Central Carolina Technical College (CCTC). He also served as Director of Cooperative Education and Placement Services at CCTC and as an admissions specialist.

Rouse and his wife, Janie, have three adult children: Retrick, Lee and Whitney.

Founded in Denmark, S.C., in 1897, Voorhees College is a private coeducational institution affiliated with the Episcopal Church and the United Negro College Fund.