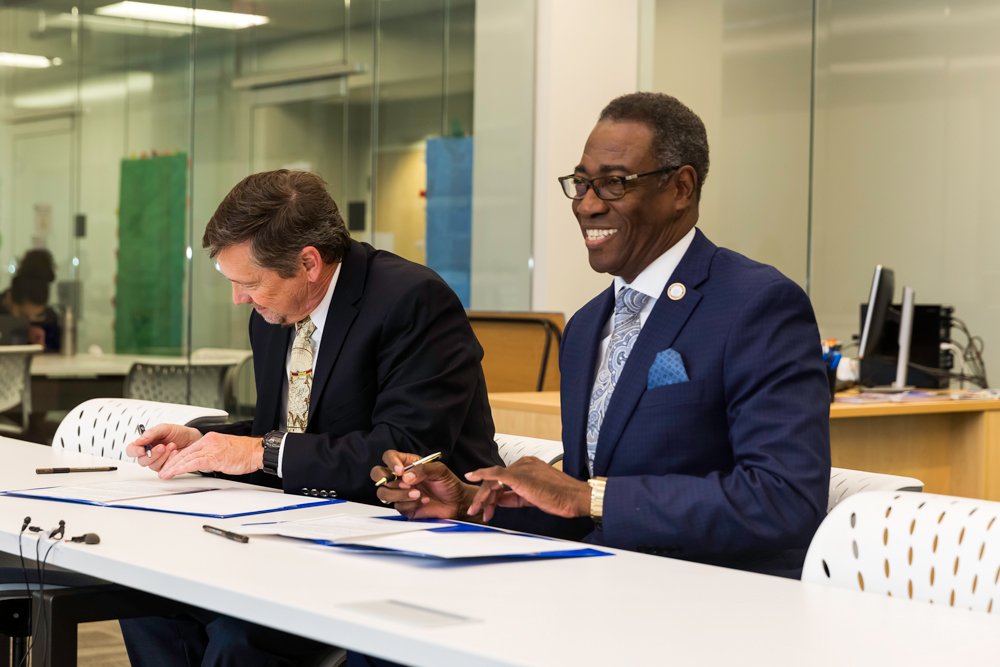 During an April 1 ceremony in the Walter & Marie Williams Building, the two announced expansion of the PCC Technical Academy this fall to serve additional Pitt County high school students and involve more programs.

In making the announcement, Rouse said the academy’s benefits are many. In addition to helping develop the local workforce, he said students would earn college credits, save money on college tuition, and gain valuable exposure to technical education options and skills sought by business and industry.

“Students will be able to train on state-of-the-art equipment that they would see in industry,” he said. “It’s a distinct advantage to them to be able to enter the workforce having already used the equipment they’ll be expected to use on the job.”

For Lenker, the academy is another shining example of PCS and PCC partnering to create unique educational opportunities for local high school students.

“That’s something we try to preach is to let our kids know what’s out there so they can actually see what they can do with their lives and what opportunities there are to make a living right here in Pitt County,” he said.

As a pilot program during the 2018 Fall Semester, the academy provided training to students from Ayden-Grifton and South Central high schools in Computer Integrated Machining and Air Conditioning, Heating & Refrigeration Technology. Under the new agreement, it will be offered to students at all six PCS high schools and the Early College High School on PCC’s campus. The academy will also include two more programs: Electrical Systems Technology and Industrial Systems Technology.

Steven Mathews, dean of PCC’s Construction and Industrial Technology Division, said PCC and PCS administrators began developing the academy during the 2017-18 academic year. It started as a pilot program, he said, in order to gauge interest and determine how well students performed academically in college-level courses.

“At first, a lot of people didn’t think it would be as successful as it was,” Mathews said. “But after they saw what was going on and what the students were doing and how they adapted to the transition and training, everybody jumped on board with it.”

Mathews said admission to the academy is selective. He explained that each school has 10 slots available for students, who must complete an application and interview in order to be considered for participation.

“We want to identify students we believe will see the program to its end; we want completers,” Mathews said, adding that capping the number of participants allows PCC instructors to offer students personal instruction and help them find pre-apprenticeship opportunities.

Students selected for the academy will be at PCC from 9 a.m. to 11 a.m., Monday through Friday. They will be bused to and from class.

“One of the key things for us was that we wanted all of our kids who wanted this [training] to be able to benefit,” Lenker said. “It wasn’t just for kids who had their own transportation. But every kid—doesn’t matter where you live in Pitt County—can come here and get involved in this program.”