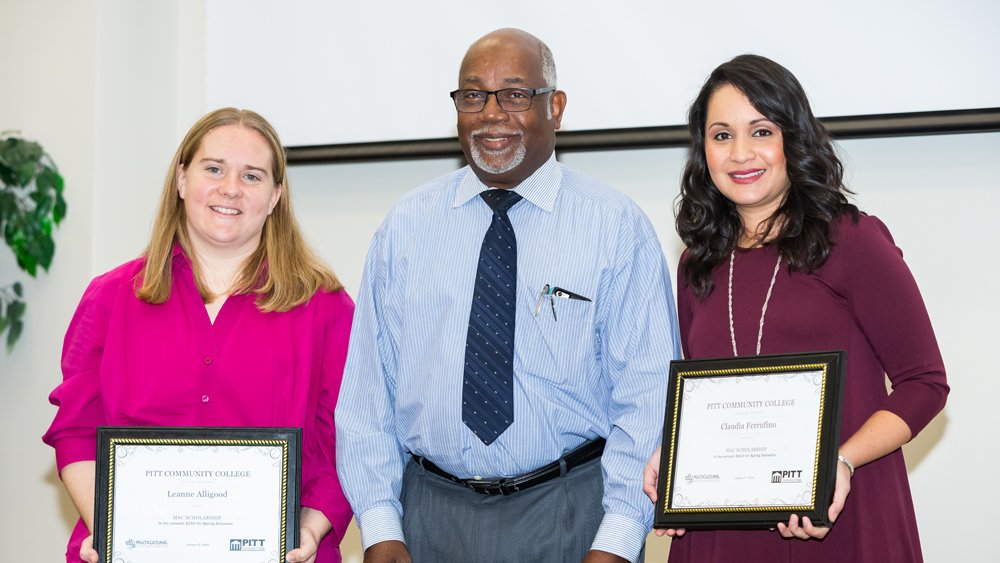 It was a scene much different from PCC’s inaugural MLK breakfast in 2013, which featured Rev. Sidney Locks, former pastor of Greenville’s Cornerstone Missionary Baptist Church, speaking to an audience of approximately 40.

During his remarks on behalf of the City of Greenville, Mayor P.J. Connelly, one of several local legislators in attendance, noted that Pitt’s MLK tribute has become “a special event,” not just for the college but the entire community.

“As I look around the room, it warms my heart to see how we have all come together despite our different backgrounds, our appearances and beliefs,” Connelly said. “When Dr. King promoted unity and equality, I believe it was this type of setting that he envisioned – a place where all people are respected and appreciated.”

Jasmin Spain, PCC Assistant Vice President of Student Development Services, said support from the community and PCC employees is the reason the tribute has steadily grown.

“Dr. King was a champion for education, and he was all about unity,” Spain said. “And with unity comes love; it is the love for one another that pushes people to give back and support those who want to achieve their educational goals and be successful.”

Spain said well over 100 tickets were sold for this year’s MLK celebration and added that proceeds from the event would fund future MAC scholarships for students who possess a unique perspective on the importance of multiculturalism and acceptance.

“Six years ago, the Multicultural Activities Committee made the decision to develop a student scholarship,” he told those in attendance Thursday. “The funding for this scholarship began with the first MLK Breakfast and continues with your participation today.”

Ferrufino, a Honduras native who moved to America with her husband 11 years ago, received a $500-scholarship to help offset the cost of her educational expenses.

“Claudia impressed the interview committee with her ability to face challenges head on, her belief that she has found her life’s purpose, and her desire to help others,” Spain said.

Ferrufino first came to PCC for English as a Second Language courses. In addition to meeting new people and gaining new cultural insight, she learned how to speak English and is now working as a medical interpreter as she furthers her education at Pitt.

“Thanks to this scholarship, my dream of helping people in the health care field can continue,” Ferrufino said upon accepting her award. “… This scholarship will give me the opportunity to continue my studies and learn new skills that will help me serve patients in a better way.”

As this year’s second-place finisher, Alligood received $250 through her scholarship. A stay-at-home mother of five children with husband, Chris, she needed a program that allowed her to pursue an education and take care of her family at the same time. She found it in PCC’s online HIT program.

Alligood is planning to work from home once she completes her HIT training. And when her children are older, she hopes to pursue a nursing degree.

Both scholarships were presented in memory of Dr. Andrew A. Best, a physician who shared King’s ideals as he practiced medicine in Greenville for 50 years while also serving in various leadership roles locally and at the state level. Prior to the scholarship presentations, Dr. Julius Mallette, a former colleague of Best, shared thoughts on his friend, who passed away in 2005.

“His philosophy was three things: tact, diplomacy and tenacity,” Mallette said. “… Those three things carried Dr. Best through many a hallway that he would not have been able to (enter) if he hadn’t had those skills.”

Though he never had the opportunity to meet King, Cunningham said he knew Best very well and referred to him as “a mentor, counselor, unwavering personal supporter” and dear friend. Best, he said, “was a true trailblazer, who paved the way for me and many African-Americans in the field of medicine to establish themselves in Pitt County and even beyond this state and nation.”

A native of Jamaica, Cunningham moved to Greenville in 1981 to practice medicine at Bertie Memorial Hospital and teach ECU medical students. A surgeon, he received numerous awards, published many research articles and eventually became dean of ECU’s Brody School of Medicine in 2008. He retired eight years later and received the Order of the Long Leaf Pine for his outstanding contributions to health care in North Carolina.

With approximately 67 percent of PCC’s student population receiving some form of financial aid, Spain said the MAC Scholarship and others like it go a long way toward making a college education accessible to the entire community.