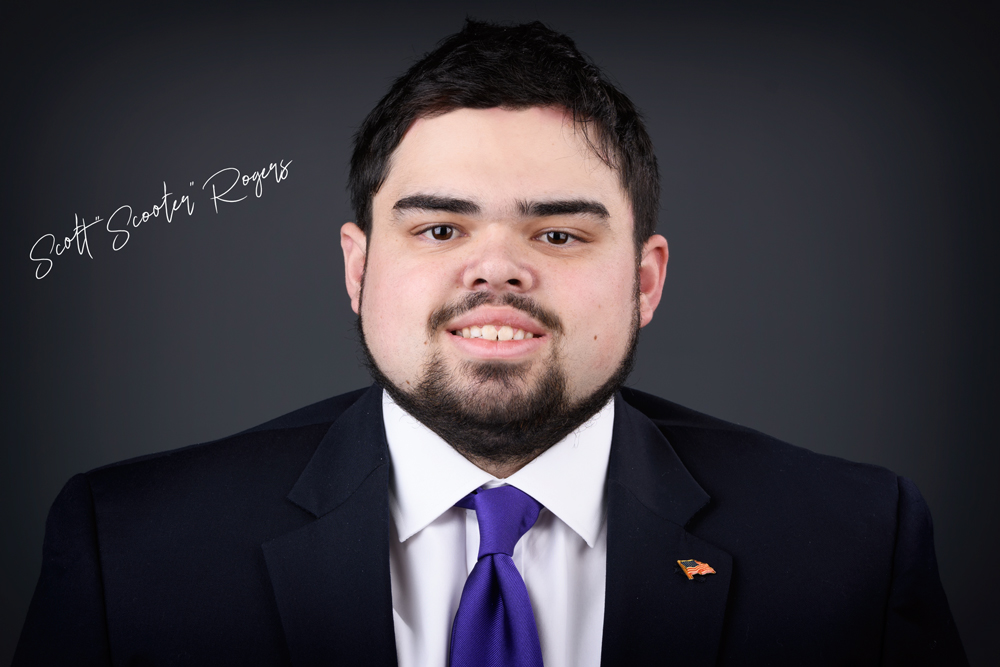 GREENVILLE—When East Carolina University’s nationally-ranked baseball team takes the field for its season-opener next month, Pirate fans listening to the game’s radio broadcast will get the play-by-play from a Pitt Community College Bulldog.

On Tuesday, LEARFIELD General Manager Meghan Heinchon announced that Scott “Scooter” Rogers will be joining former ECU Baseball Coach Gary Overton in the broadcast booth throughout the 2022 season. Rogers will describe the action on the field, and Overton will provide in-game analysis.

“As a lifelong fan of this program, it is an honor and privilege to be selected as the ‘Voice of Pirate Baseball,'” Rogers said. “I want to thank Meghan Heinchon with LEARFIELD and ECU Athletics for giving me this great opportunity. I look forward to painting the picture and telling the story of the two-time defending American Athletic Conference champions.”

At 21 years old, Rogers is certainly not a stranger to the microphone. The Greenville native is already well known to local sports enthusiasts for his public address work with ECU Athletics, J.H. Rose High School and Greenville Little League venues. Announcing, he says, has been his dream for as long as he can remember.

“My mom will tell everyone that when I was younger, I would sit in front of the TV with my plastic microphone and act like I was the announcer,” Rogers said. “Being a broadcaster is something that caught my attention from that young age, and it’s been a career I’ve had an interest in since.”

Currently majoring in communications and minoring in sports studies at East Carolina, Rogers got an early start on a college degree through PCC’s Career & College Promise program. It gave him a chance to earn college credits as a high school student and also helped him transition back to the traditional classroom setting, after being homeschooled since seventh grade.

Upon receiving a high school diploma in 2019, Rogers continued his studies at Pitt and enrolled in the college’s University Transfer program. He graduated in May 2021 with an Associate in Arts degree and transferred to ECU.

“My [PCC] experience was amazing,” Rogers said. “I never had a bad professor, and everyone on campus was always very nice and had a smile on their face. The ‘two-year route’ is something that I would encourage every high school graduate to explore.”

With the start of East Carolina’s 88th collegiate baseball season just three weeks away, Rogers is eagerly awaiting his first official broadcast with the Pirates. He’s aware there’ll be occasional challenges with keeping listeners engaged throughout a 56-game regular season, particularly on nights when it takes longer than four hours to determine the outcome.

But Rogers is prepared for his new gig. He’s been working alongside Greenville Little League Commissioner Brian Weingartz in a variety of roles since 2014, including digital scorekeeping, producing and calling play-by-play for livestream events, and is determined to utilize the skills he’s developed in that time to create a vivid picture of everything taking place on the diamond for Pirate Nation. He also knows he can rely on the coaching legend beside him in the booth to supply critical insight.

“I am blessed to have such a great color analyst in Coach Gary Overton for the ECU broadcast,” Rogers said. “Coach O brings so much knowledge of the game and history of East Carolina to the broadcast.”

As he approaches the start of his dream career, Rogers had a message for youngsters hoping to someday follow in his footsteps. “Always follow your dreams,” he said. “Never let anyone tell you that you can’t succeed at something. Do whatever it takes to be good at what you want to do.”

East Carolina is scheduled to open the 2022 campaign on Feb. 18 against Bryant University. First pitch at Clark-LeClair Stadium is set for 4 p.m. Pirate fans can listen to Rogers call the action all season long on 94.3 The Game (WRHD) or by using the Varsity Network App.