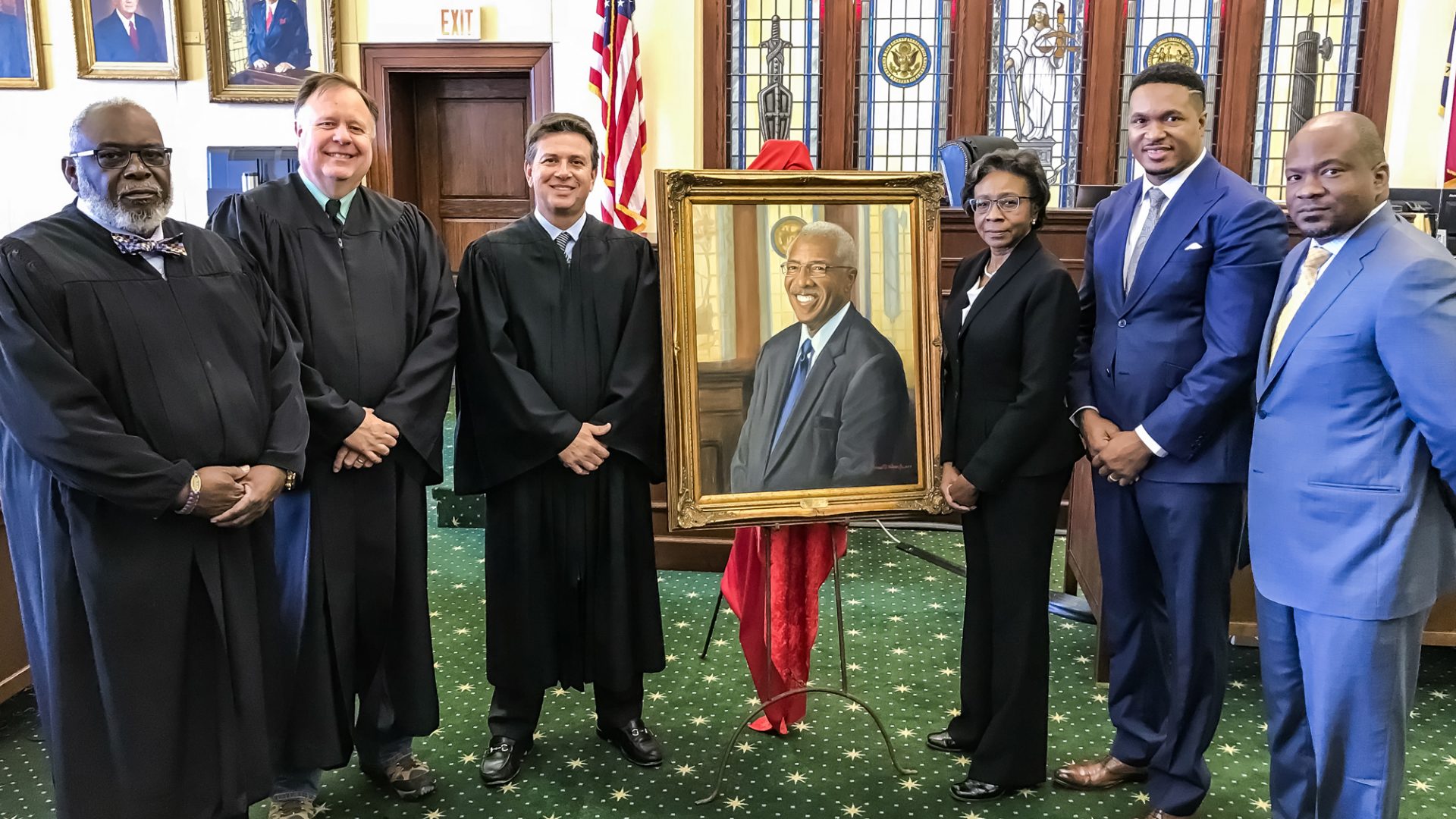 GREENVILLE—Though a car wreck claimed his life two years ago at age 64, Earl T. Brown’s “infectious smile” will continue to brighten the Pitt County Courthouse in much the same way it did when he was an attorney, thanks to the brilliance of artist Richard Wilson.

During a ceremony at the courthouse last month, Wilson, a 2007 Pitt Community College Advertising and Graphic Design graduate and former adjunct instructor, unveiled a 24-by-30-inch oil painting of Brown wearing glasses, a black suit, white shirt and blue tie. The painting, which now graces the wall of the same second-floor courtroom depicted in the artwork, shows Brown flashing the radiant smile those who knew him will never forget.

“I wanted to create a genuine likeness of Mr. Brown,” Wilson said. “I was provided a large photo of him to work from, and my goal was to capture the spirit and likeness of him from the photo—not just duplicate the photo, as is. I wanted to bring forth his personality.”

Wilson said he was commissioned to produce the painting last summer by Brown’s widow, Hazel. Since he had never met the man in person, Wilson was able to get a better idea of he was by speaking with those who knew him best.

“Everyone mentioned that signature smile, so I knew that had to be right, if nothing else was,” Wilson said. “I even researched him online to get a better sense of who he was.”

Through his search, Wilson said he learned Brown was a man who loved his family, friends and community. “He was smart, hard-working and had a heart of gold,” the artist said. “I know people loved him and miss his presence.”

For more than 20 years, Brown practiced law out of the Greenville office he opened in 1993. Prior to a career change, the Tarboro native had been a computer programmer.

After he died, family, friends and colleagues described Brown to the media as “an all-around great guy” with an ability to get along with anyone. He made people laugh, they said, and was a popular figure in the courthouse.

Two days after the tragedy on Highway 33, the Pitt County Clerk of Superior Court’s Office posted a sign on the door offering sympathy and prayers to Brown’s family and friends, along with a statement on how he will be remembered. It read, “Earl T. Brown: Dedicated family man, Papa Earl, attorney, mentor, friend to all, and candidate for District Court judge.”

Brown, who led a Black History Month presentation at PCC in 2010, was seen by many as a champion of education and civil rights, in addition to being a role model for the community’s youth. So, when his portrait was officially unveiled during a courtroom lunchbreak on Jan. 18, Wilson said people attending the ceremony were excited and eager to have their photo taken with it.

“Almost everyone who saw the reveal was like, ‘Wow, that’s Earl. It looks like he can come off the canvas and talk to you,” Wilson said, adding that there was one reaction, in particular, he anticipated the most, Hazel Brown’s.

Wilson recalled that when Hazel Brown entered the courtroom prior to the unveiling ceremony, she asked him if she could view the portrait before everyone else did. He agreed and said she took a brief look at the painting before taking a deep breath to collect herself.

“She said even though she saw the painting at my studio, it was different when she saw the final painting framed and with the final changes,” Wilson said. “She said she was very pleased and that I did a great job. That meant the world to me.

“But one other thing that I will cherish forever is when she told me that she liked working with me,” he continued. “That was the greatest gift she could have given me. I’m so grateful for Mrs. Brown. She blessed me tremendously with this opportunity.”

Wilson said it took six months to complete the painting and that Hazel Brown offered several suggestions during the process. A dentist, she asked him to emphasize her husband’s “signature smile” and remove some of the shine that was visible on his face in the reference photo.

Primarily a pastel artist, Wilson said the Brown portrait may have been his first try at painting with oils but it wouldn’t be his last.

“I quickly realized that the layering process [with oils] is very similar to pastels,” he said. “I’ve found a new love for painting in oil, and I’m excited about doing more.”

Born in Robersonville and raised in Conetoe, Wilson has been painting since he was eight years old. His works include pastels of scenic landscapes and old tobacco barns, though his favorite subjects are sports and children, with his three daughters serving as his inspiration. PCC has purchased several of those paintings, including one that hangs in President G. Dennis Massey’s office.

Though he took several fine art courses at nearby Barton College, Wilson says his talent for painting comes naturally. He has won numerous awards for his work, including two from the Pastel Society of America. One of his paintings was featured on the cover of Sunshine Artist, a national art publication, in 2013 and another, depicting tennis legend Arthur Ashe, was purchased for museum display by the International Tennis Hall of Fame in Newport, R.I.

In 2015, Wilson finished in the Top 10 of a national label design contest organized by the Blue Moon Brewing Company in celebration of its 20th anniversary. A year later, five of his paintings were featured in the motion picture “Barbershop III: The Next Cut.”

While painting Brown’s portrait with oils was a first for Wilson, it was the second time his artwork has been put on permanent display in a North Carolina Courthouse. The first was a rendering of North Carolinian George Henry White—the last former slave to serve in Congress—that has been hanging in the Edgecombe County Superior Courthouse since 2005.

“My talent and faith have earned me a place in North Carolina history as the first African-American artist to have a painting permanently displayed in a North Carolina courthouse,” Wilson said. He added that his success as an artist proves the Bible is correct when it states in Proverbs that “a man’s gift maketh room for him and bringeth him before great men.”

To view more of Wilson’s artwork or to commission him for a painting, visit www.richardwilsonart.com. His talents are also on display on Instagram, Facebook and Twitter.