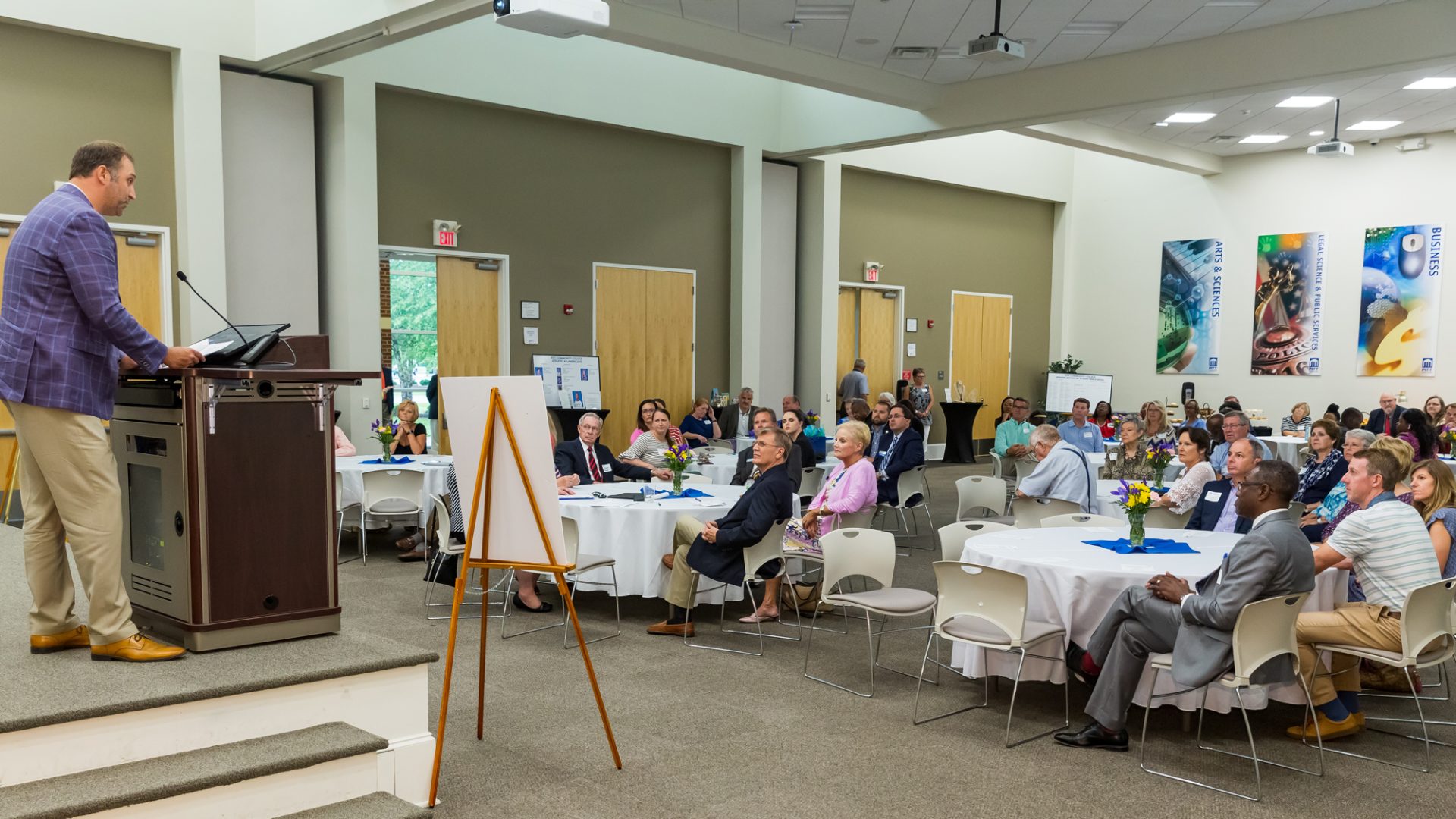 WINTERVILLE—The Pitt Community College Foundation held its annual Distinguished Donor Reception this month to thank supporters for their commitment to education during the current academic year.

The program, which took place June 6, featured food and musical entertainment, along with remarks from PCC administrators and PCC Foundation Board Chairman Miles Minges, who explained to donors how their generosity has contributed to student success.

“Your support, your contributions, and your generous spirit have helped us provide more support for Pitt Community College than ever before,” Minges told donors. “So, tonight, we are very happy to pause and thank you and recognize you for the positive difference we are making together in our community.”

According to Minges, the PCC Foundation awarded more than $359,000 in scholarships and mini-grants during the 2018-19 academic year. He said the organization also served 354 students through the VISIONS Career Development and Scholarship Program and helped secure funding to assist the college with building the Eddie and Jo Allison Smith Center for Student Advancement.

“This facility is truly a dream that will come true for our college,” Minges said. “We hope you can join us for the groundbreaking ceremony [July 29].”

In addition to facility fundraising, PCC Vice President of Institutional Advancement Susan Nobles said the foundation has been working hard to raise $1 million to match a generous offer from the Eddie and Jo Allison Smith Family Foundation. She explained that the Smiths have promised to provide as much as $2 million to the VISIONS program by matching every dollar the PCC Foundation raises for VISIONS this year with two dollars from their charitable organization.

“The substantial offer we’ve received from the Smith Family Foundation is a shining example of the generosity they’ve shown Pitt Community College over the years,” Nobles said. “It’s a reflection of the Smiths’ commitment to the well-being of their community and the college’s mission to educate and empower people for success.”

Nobles, who is the PCC Foundation’s executive director, said individuals and businesses have contributed to the organization in many ways within the past year, including capital campaign and annual fund gifts, facility-naming opportunities, planned gifts, in-kind contributions and scholarship endowments. She noted that PCC faculty and staff contributed/pledged $96,000 as part of the Employee Annual Fund Drive last fall and said three additional fundraising events generated another $210,000 to support students.

“Our donor list has grown substantially in the past few years, to the point we may need to add more space to our donor wall,” Nobles said. “It’s a welcome situation for us to have and a clear indication of the community’s emphasis on higher education and student success.”

One former PCC student, 2008 Building Construction Technology graduate Michael Letchworth, was the featured speaker at the donor appreciation program. Letchworth, who earned a bachelor’s degree in Construction Management from East Carolina University after completing his PCC studies, is now working as operating partner with Sam Jones BBQ in Winterville.

While he admits he doesn’t use the specific construction skills he learned in college very often in his present line of work—though they were particularly useful when the Sam Jones restaurant was being built—Letchworth says he values his PCC education. He pointed out that the soft skills he developed at Pitt have helped him in his career, as have the relationships and connections he made during his time at the college.

Along those lines, PCC President Lawrence Rouse reminded donors of the importance of their connections to the PCC Foundation in his welcoming remarks. Rouse said their support has made higher education more accessible to the community while enabling the college to go the extra mile in providing quality instruction and exceptional service to students.