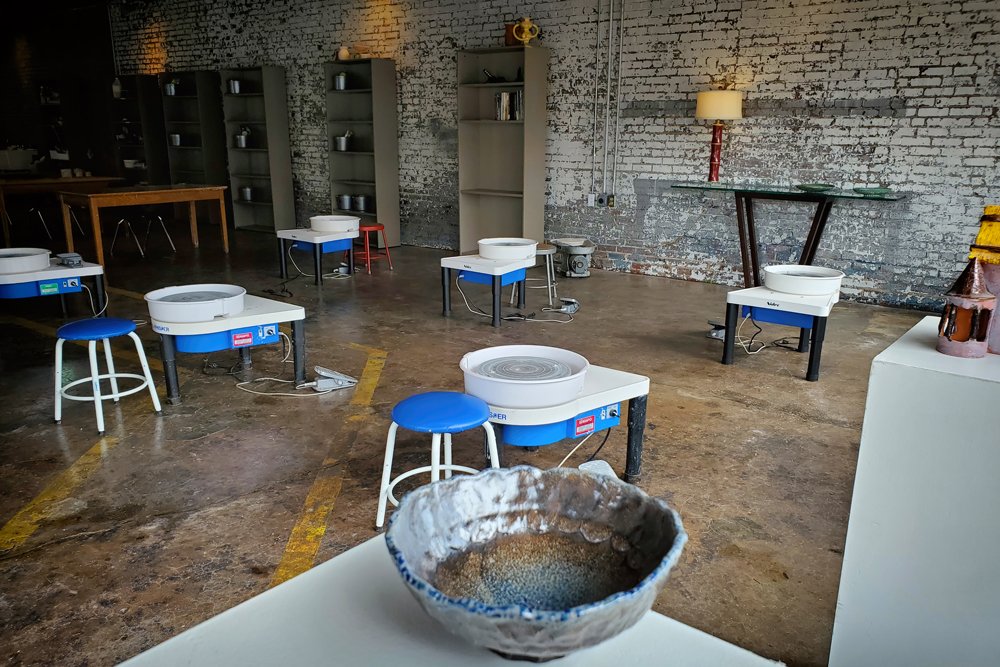 FARMVILLE—Thanks to its unique partnership with East Carolina University’s School of Art and Design, Pitt Community College will begin offering ceramics courses at the DeVisconti Art & Event Center during the spring semester.

“We’re really excited to have a satellite ceramic studio to bring more arts into the Farmville community,” said Charity Valentine, chair of PCC’s Associate in Fine Arts Department. “The pandemic delayed the studio’s opening, but we’re planning to have credit and continuing education courses in there this spring.”

Valentine said plans for a studio began taking shape nine months ago, after she noticed space was available in the GlasStation, a former gas station on West Wilson Street ECU has transformed into a venue for artist presentations and classes on glass-blowing.

“There was additional space ECU was renting in conjunction with their rental of the entire GlasStation space,” she said. “They had tried a couple of different things, but nothing stuck, so it was not being used.”

Since PCC is a partner in supporting the GlasStation, Valentine said she decided to explore the possibility of Pitt renting the space for a ceramic studio. ECU agreed, as did Farmville business owner Todd Edwards, who was instrumental in getting the GlasStation project started as a member of a grassroots organization dedicated to revitalizing downtown Farmville.

Valentine said initial plans called for PCC to rent an area in the back of the facility, which was donated to the DeVisconti Trust several years ago to help Farmville develop economically. But after a new hardware store that opened next door needed additional storage space, she said Edwards worked it out with ECU for Pitt to occupy space in the front part of the GlasStation at the same cost.

“We ended up getting space in the front of the building that is directly on Wilson Street,” Valentine said. “It’s about two-and-a-half times larger and looks amazing. It was very serendipitous for us.”

Over the summer, PCC staff moved a kiln and other equipment into the studio. Edwards wired the kiln room, put in a sink and clay trap, and installed drop cords from the ceiling for pottery wheels.

“The wheels are right in front, so people will be able to see students at work from outside the building,” Valentine said. “I was really impressed, not just with Todd’s support but also the Farmville Arts Council and community members who are enthusiastic about having the studio downtown.”

Valentine said PCC scheduled ceramics classes in the new studio this fall but not enough people signed up, due in large part to the coronavirus pandemic.

“We had a lot of calls, but people were skeptical of taking the courses online,” she said. “We’re going to offer a selection of curriculum and continuing education classes this spring. We’re also hoping to develop after school programming once things return to normal.”

Valentine said credit courses will have a hybrid format, meaning they will meet online part of the time and also in person. Though meeting details could change as a result of state pandemic regulations, she said all of the classes – credit and non-credit – would ultimately adhere to health safety protocols, including proper social distancing.

“The fact all of this came together is amazing to me,” Valentine said. “There were so many people involved who were supportive and willing to think creatively that allowed this partnership to grow. It’s a wonderful example of a collaborative community coming together, and I think it’ll be an even stronger community partnership once we’re past the pandemic.”

For now, PCC has scheduled two sections of ART 283: Ceramics I this spring – one that meets Friday afternoons and another in the evening on Mondays and Wednesdays. For social distancing purposes, classes are limited to eight students, who will alternate days in the studio so there are only four in there at any given time.