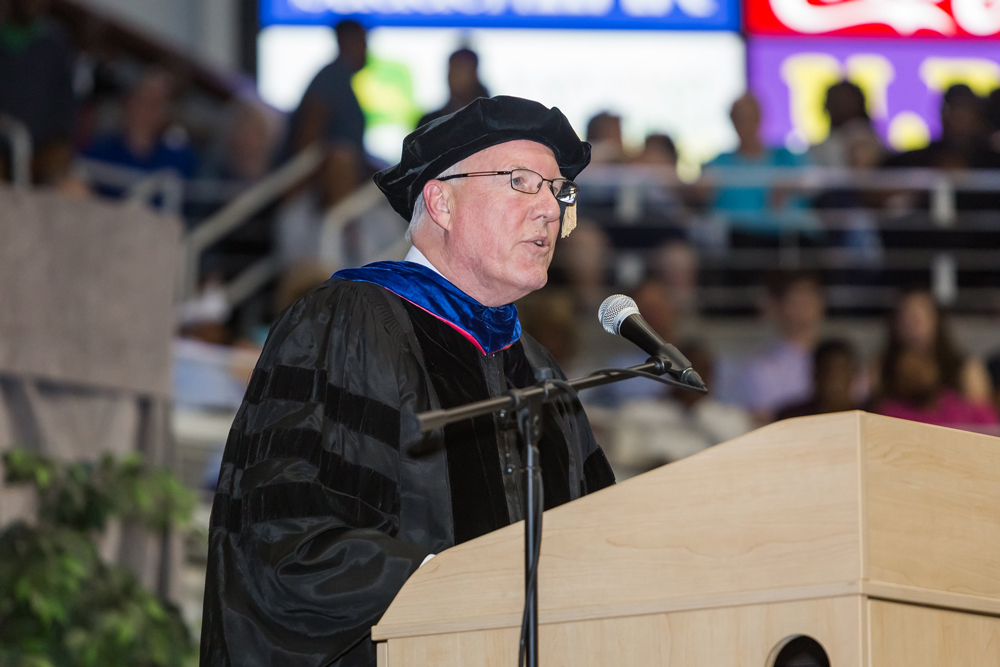 The program will begin at 7 p.m. in East Carolina University’s Williams Arena at Minges Coliseum. Of the nearly 600-member graduating class, approximately 500 are expected to participate in the ceremony.

After organizing virtual graduations in the spring of 2020 and 2021 due to the pandemic, PCC held its first-ever fall commencement ceremony to celebrate the achievements of 248 graduates. The event took place in-person at the Greenville Convention Center on Dec. 17.

This month’s graduation ceremony will mark PCC’s return to Williams Arena for the first time since May 2019.

“For the first time in three years, we’re preparing to celebrate graduates with an in-person ceremony in Williams Arena; to me, that’s one giant step for Pitt Community College on the path to normalcy,” said PCC President Lawrence Rouse. “The past few years have been challenging, to say the least, so I’m eager to see 500 members of our 2022 graduating class enter the arena Tuesday evening and turn it into a sea of PCC Blue.”

Pitt’s return to the ECU campus will also mark the return of one of only five individuals to serve as PCC president in the college’s 61-year history. For Massey, it will be the first time since 2018 that he’s donned graduation regalia to address PCC grads.

Hired in 2003 to replace the retiring Charles E. Russell, Massey spent the next 15 years leading PCC to considerable growth in terms of enrollment, facilities, acreage and economic impact. A study of FY 2015-16 by Economic Modeling Specialists International determined PCC and its students added $277.2 million in income to the college’s service area economy, with Pitt alumni in the regional workforce accounting for $200.8 million of that total.

With Massey as president, PCC became North Carolina’s sixth-largest community college in terms of student credit hours. When he retired in 2018, Pitt served more than 23,000 students in credit and non-credit programs annually – approximately twice as many as it did when he started.

Of the 18 buildings on PCC’s main campus, nine were constructed with Massey at the helm. PCC also constructed a Public Safety Training Center outside of Bethel, purchased the former MacThrift office building on Memorial Drive and made it the PCC Greenville Center, and cut the ribbon on the PCC Farmville Center in 2016.

Just prior to his retirement, Massey was named the “2017 Citizen of the Year” by the Greenville-Pitt County Chamber of Commerce for “outstanding service to the community through leadership and achievement.” The Winterville Chamber of Commerce presented him with its Education Leadership Award, and PCC Trustees honored him with a Distinguished Service Award in 2018.

Born in Illinois, Massey grew up in Kentucky before embarking upon a 46-year career in higher education that took him to Japan, Illinois, Oregon, Wisconsin and North Carolina. Prior to joining PCC, he was interim president and vice president of academic and student affairs at McHenry County College in Crystal Lake, Illinois.

Massey and his wife, Chikako, have two sons, Ken and Sam, and six grandchildren.