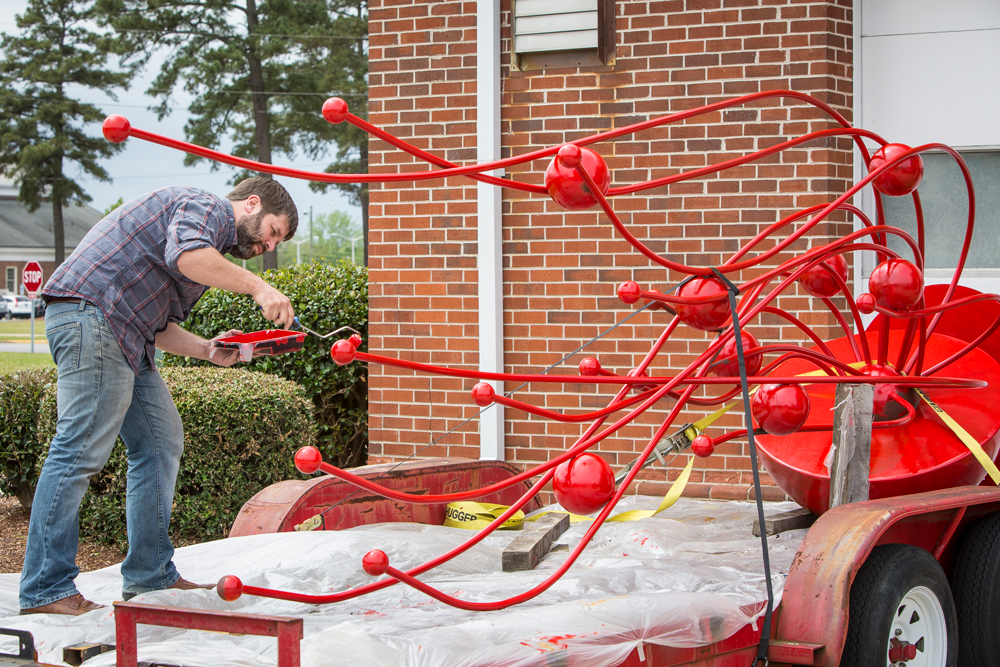 WINTERVILLE—Pitt Community College Associate in Fine Arts Instructor Matt Amante has taken top honors in a national outdoor sculpture competition sponsored by the City of Rocky Mount through the Imperial Centre for the Arts & Sciences.

“Salmagundi is a great show,” Amante said. “It’s always extremely competitive. I think I have been rejected from the show more than I have gotten into it. I have been in it four times now, but I think I have probably applied for it nine times.”

Though he’s sold many of his creations and many have been on public display within the past 12 years, Amante says his “Best in Show” selection represents the first time he’s taken the top prize for an outdoor exhibition like Salmagundi.

“I’m extremely excited to win the award and have this piece purchased,” he said. “Public art is a challenging and very competitive field, so it’s a great feeling to have your efforts appreciated and enjoyed by others.”

Amante’s winning sculpture, which consists of painted steel, soil and plants, has been installed outside the train station in downtown Rocky Mount and will be displayed there until September 2022.

“It’s always great to see these pieces go on public display,” Amante said. “I make them in my studio, but the goal is to see them in public spaces.”

A Michigan native, Amante graduated from Western Michigan University in 2004 with a bachelor’s degree in art education. He earned a Master of Fine Arts in sculpture from East Carolina University (ECU) in 2010 and began working at PCC the following year. In addition to teaching sculpture, art appreciation, and portfolio and resume courses at Pitt, the Winterville resident serves on the college’s Fine Arts and International Education committees, advises students, and maintains the school’s public art program.

Since Amante came to Pitt, several sculptures have been added to the campus landscape. The first, a 13-foot metallic sculpture designed by ECU professor Carl Billingsley, was unveiled in 2012 near the Ed & Joan Warren Building. Amante said students from seven different classes participated in the design’s construction and added that the project offered them a unique learning experience and valuable hands-on training.

“I love the fact that PCC has public art on campus and we were able to grow the collection here,” he said. “The making process is an amazing experience for our students, but having the artwork on campus every day is even more valuable, in my opinion.”

Describing himself as “an unrepentant object maker,” Amante says he has a “continual drive to learn” and enjoys everything from casting metals and polishing stone cabochons to making fishing lures and 3D printing vessels. No matter the project, though, he’s always “experimenting with new materials and processes” to “figure out something new” he can share with students in the classroom.