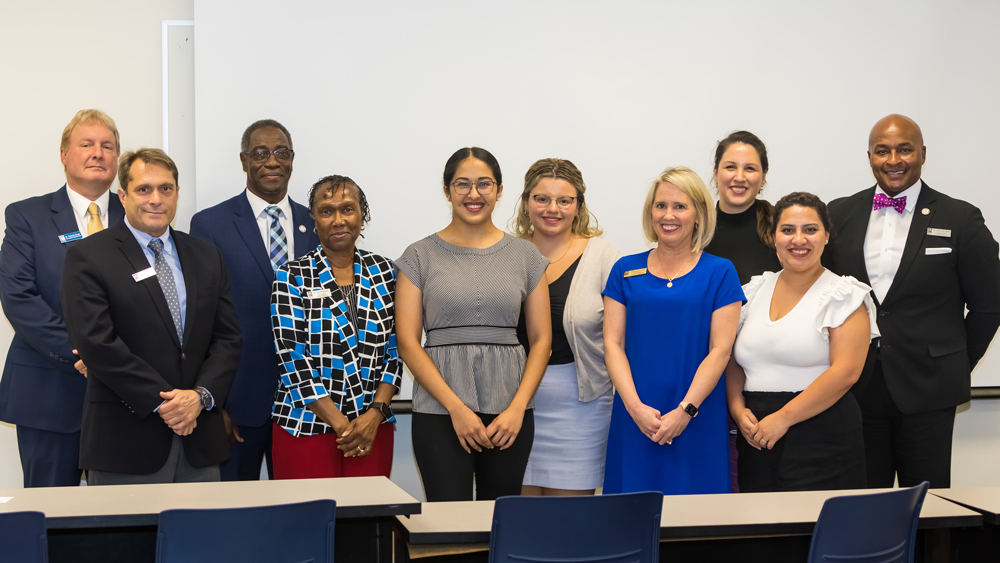 WINTERVILLE—LatinxEd’s efforts to advance Latino leadership and student success in North Carolina brought representatives from the Chapel Hill-based non-profit to Pitt Community College Tuesday for a series of information-gathering sessions.

Through grant funding from the John M. Belk Endowment, LatinxEd launched the “We Are NC Listening Tour” in the fall of 2021. In the months since, the tour has featured stops and/or virtual meetings in eight regions of the state to give LatinxEd representatives a chance to speak with educational leaders, Latin American students and families, and representatives from organizations that specifically serve Latino communities.

The goal, according to LatinxEd Executive Director Elaine Utin, is to gather information they can use to invest in Latin American leadership and ensure educational equity and opportunity for Latinos in the Tar Heel State. Even though North Carolina has the nation’s sixth-fastest growing Latino population and seventh-largest Deferred Action for Childhood Arrivals (DACA) population, less than 4% of the state’s public postsecondary students are Latino. The result, according to LatinxEd, is a lack of Latino representation in key professions, be it teachers, doctors, engineers, entrepreneurs or civic leaders.

While visiting PCC, Utin said the listening tour had given members of her organization a “deeper understanding” of the obstacles Latinos encounter with regard to accessing and completing higher education. She said low socioeconomic status, mixed-residency status households, and dual-language families are contributing factors, along with the fact many Latinos in North Carolina reside in rural communities where higher educational opportunities are limited.

In addition to meeting with PCC President Lawrence Rouse and members of his President’s Leadership Team, the LatinxEd group had discussions with Pitt faculty members and representatives from the Association of Mexicans in North Carolina (AMEXCAN). They were particularly interested in learning about measures the college had taken to serve Latinos, the results of those initiatives, and areas of concern.

Dr. Thomas Gould, PCC Executive Vice President of Academic Affairs and Student Services, said discussions like the one with LatinxEd representatives this week go a long way toward helping the college improve services. He said it also helps with outreach to potential Latino students at a time when Pitt County’s Latino population is growing.

“PCC’s partnership with LatinxEd provides the college with valuable insights into the barriers facing our local and regional Latinx population as they pursue postsecondary training and education,” Gould said. “With this knowledge, PCC is able to work with the Latinx community to address these obstacles and to serve these students to the best of our ability.”

While there are potential barriers out of PCC’s purview, including tuition rates and financial aid regulations, Gould said Pitt had been extremely successful working with the local Latino community in matters it can control, including short-term workforce development training specifically geared toward serving Latinos. He said the courses are taught in English but feature Spanish interpreters and have led to Latinos receiving certificates in subjects like general HVAC maintenance, electrical systems, and welding.

PCC Vice President of Strategic Initiatives and Community Engagement Johnny Smith said he has seen significant improvement in the way North Carolina community colleges have reached out to the state’s Latino communities and served their educational needs.

“In two decades with the community college system, I’ve seen us go from having a difficult time reaching Latinos and getting them started in higher education to determining ways we can serve Latinos even better,” Smith said. He added that PCC’s commitment to diversity, equity, and inclusion is exemplified by its three-year partnership with the Achieving the Dream National Network.

Smith noted that PCC signed a memorandum of understanding with AMEXCAN last spring to provide programming and services that help the organization’s clients overcome educational and employment barriers. A joint advisory board comprised of PCC and AMEXCAN personnel meets regularly to review and strengthen the partnership, which features courses being taught at the Bernstein Center in Greenville.

Following the conclusion of LatinxEd’s statewide listening tour, Utin said the organization will hold “Latin Education Summit 2022: From Dreams to Action” Sept. 14-15 at Guilford Technical Community College. The event will give the organization a chance to share what was learned on the tour and discuss common areas of concern for North Carolina’s Latino population in the hope it will lead to positive change.