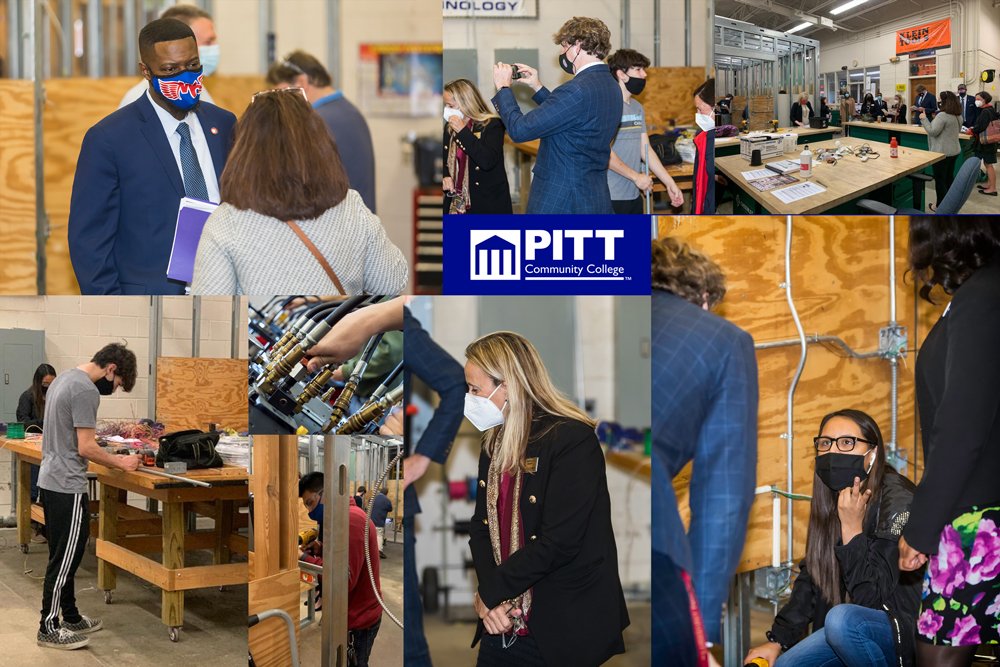 WINTERVILLE—State educational leaders visited Pitt Community College March 1 for a closer look at the PCC-Pitt County Schools (PCS) Technical Academy and precautions the college is taking to keep participants safe in classes that must still meet in-person despite the pandemic.

The visitors, which included State Board of Education members and N.C. Department of Public Instruction officials, toured Pitt’s Electrical and Industrial Systems Technology programs – two of the four curricula Pitt County high school students can take through the academy, along with Air Conditioning, Heating & Refrigeration Technology and Computer Integrated Machining. During their stops, they spoke directly with students and instructors about the academy and social distancing protocols in place for in-person classes.

Ruby Villegas, a senior at D.H. Conley High School, says she talked with officials about being the only female in her Electrical Systems class and how she became interested in the program. The Grimesland resident is in her first year of Technical Academy participation and says she plans to return to PCC after high school graduation to finish an associate degree in Electrical Systems.

“The Technical Academy has helped me get my academic career started early and for free,” Villegas said. “Now, I won’t have to worry about how I will pay for my first year in college. It’s been a good experience, and I’ve learned a lot of things hands-on.”

The academy, which developed through a partnership between PCC and PCS, began as a pilot program during the 2018-19 academic year before growing substantially in year two. It offers high school juniors and seniors an opportunity to complete an associate degree one year after finishing high school and, with the skills they’ve acquired, move into well-paying careers that are in high demand.

Students selected for academy participation are bused to and from class on the PCC campus at no charge. The cost of their tuition, fees and books is also covered.