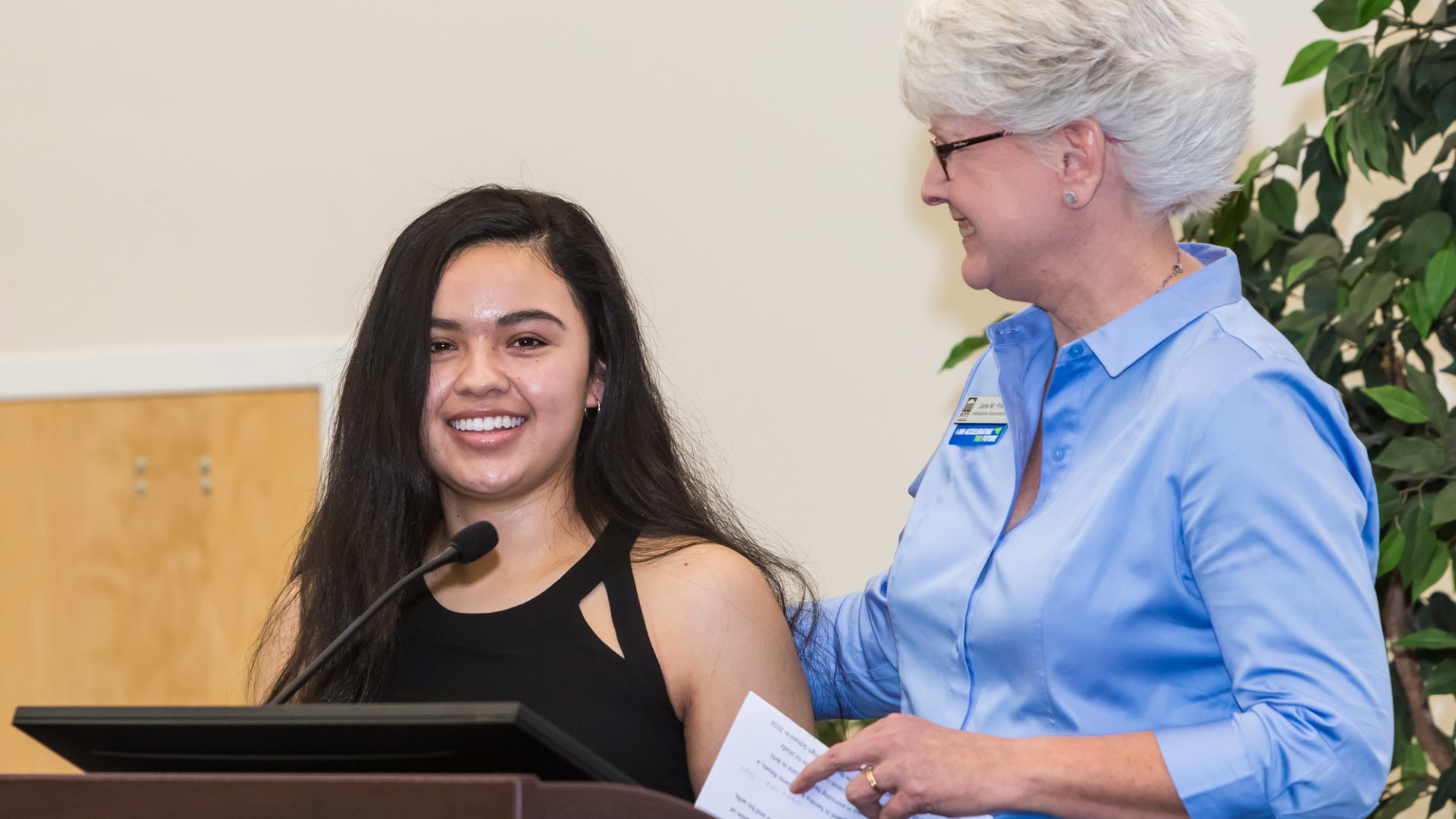 WINTERVILLE—Pitt Community College celebrated the life of civil rights leader Martin Luther King Jr. Thursday with a breakfast program that featured the presentation of a $500-scholarship to student Sandra Argomaniz-Reyes.

Each January, the PCC Multicultural Activities Committee (MAC) organizes a scholarship fundraiser as a tribute to King, whose birthday is Jan. 15. The event generates revenue for the college’s MAC Scholarship, which is presented annually to a student who shares King’s ideals.

Reyes, a 2016 graduate of North Pitt High School, is a second-year college transfer student planning to pursue a four-year degree in communications. The 19-year-old Greenville resident says she wants to explore cultures and share stories of the interesting people she meets.

“I want to be able to travel and educate people from all over …,” she says. “I truly believe that everyone deserves to have an amazing life, and that starts with education. If we help others and make them aware of what is out there, this could be a world filled with extraordinary people.”

Reyes’ says her views on multiculturalism have been taking shape since grade school. She explained that as a youngster, she’d never noticed any differences between herself and her classmates, until some students began pointing out different skin colors and how others couldn’t speak fluent English.

“That was the day that it occurred to me how others viewed people differently than I did,” Reyes says, adding that her Hispanic heritage made her a target of ridicule.

“I honestly felt bad for them bullying me, because they were uneducated and had no idea how their words hurt others for a lifetime,” she said. “As a Mexican-American, I did get bullied in school and outside of school because of my accent, skin color and for the stereotypes that many people have about my culture.”

“Education is key to being a well aware person in this society,” she says. “Because without knowledge, your doors to opportunities could be very small.”

Along with scholarships from PCC’s VISIONS Career Development and Scholarship Program and the PCC Foundation, Reyes says her MAC Scholarship funding is making her dream of a college degree a reality.

“Growing up with a single mother, it seemed that college was not going to be an option for me or my siblings,” she said.

PCC Assistant Vice President of Institutional Advancement Marianne Cox has worked with Reyes through the VISIONS program for the past several years and says she is making the most of her opportunities at Pitt.

“Sandra is committed to her studies, driven to succeed and grateful for the opportunity to pursue a college education and for the financial assistance she has received,” Cox said. “She’s one of those people who’s going to make a difference no matter what career path she chooses.”

Reyes is already making a positive impact in her community through volunteerism. She assists with the art campus at Greenville’s Emerge Gallery and Art Center, serves food at Bethel Fire Department fundraisers, interacts with residents at Golden Living Center, and has helped out with Special Olympics annually for the past four years.

“My dream is to be able and help people succeed no matter their skin color, ethnicity or religion,” Reyes says.

This year’s MAC Scholarship was presented in honor of Raymond Reddrick, a champion of education and longtime PCC supporter. A Greenville resident, Reddrick was a PCC Trustee for nearly 30 years and served more time as chairman than any other trustee in the college’s 57-year history.

In addition to the scholarship presentation, the 6th Annual MLK Scholarship Tribute Breakfast included a speech by longtime teacher/administrator Ella Harris, who recounted her life experiences and offered sage advice to future generations.

Harris said people today are keeping King’s dream of racial harmony and equality alive while recognizing there are still challenges ahead. Society, she said, must “go back to basics,” with adults modeling the behaviors expected of today’s youths and the characteristics they want them to develop.

“The beauty of my life is that I always knew (where I came from) and who I am,” Harris said. “That’s what we have to do for our children today.”