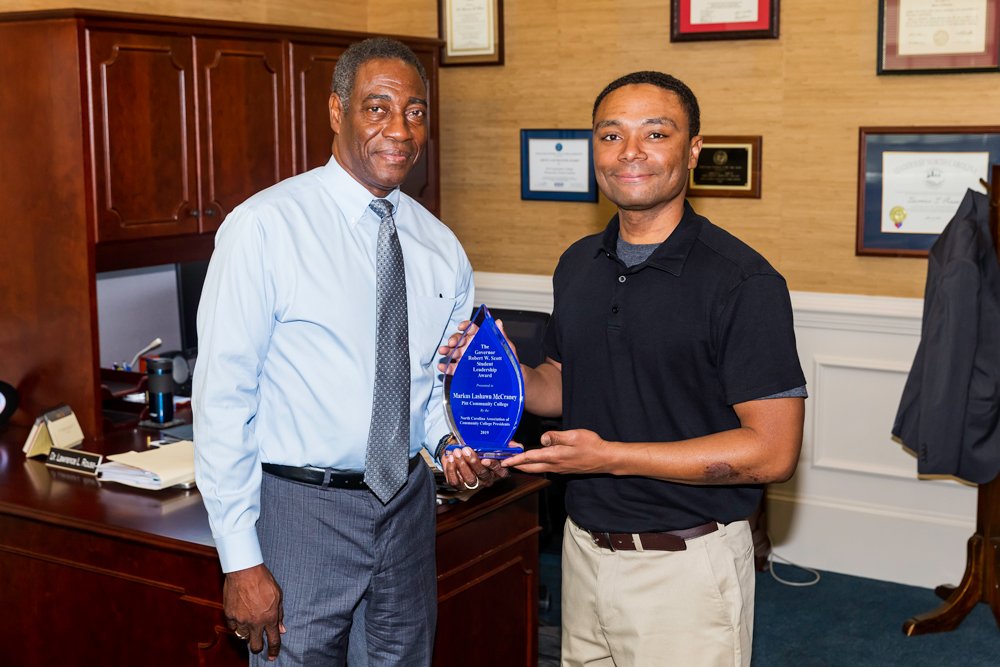 Last month, NCCCS announced that Markus McCraney, a PCC Associate of Arts student also taking entrepreneurship courses, was selected for the 2019 Scott Award from a group of nominees representing community colleges across the state. McCraney, who has a 4.0 GPA, follows in the footsteps of PCC graduates Jason Donica and La’Quon Rogers, who received the honor in 2012 and 2015, respectively.

Established in 2004 to honor a former North Carolina governor and NCCCS president, the $1,000-award is presented annually to a North Carolina community college student for demonstrating leadership on a statewide level, active campus involvement, and the characteristics of a future community leader.

Though surprised when he learned he’d won the award, McCraney says he is passionate about everything he sets out to do and was happy to have been chosen. He said good leaders “embody the characteristics” they want to see in their followers and “recognize their place among” their team members, not above them.

“A good leader positively engages their team, motivating them to fulfill their goals to the best of their abilities, and challenges them to push higher,” he said.

On track to receive an Associate in Arts degree as well as a degree and certificate in entrepreneurship at the conclusion of the 2019 Fall Semester, McCraney received an Academic Excellence Award from PCC this spring in recognition of classroom achievement and volunteerism. He is a Dean’s List student and president of the college’s Phi Beta Lambda chapter of Future Business Leaders of America—an organization he helped restart from scratch. In September, he assisted victims of Hurricane Florence with cleanup.

McCraney says his future educational plans involve working toward a doctorate after completing a Bachelor of Finance and Master of Business Administration. He wants to pursue a career working with financial technologies.

“I’m extremely interested in ‘fintech’ and would like to help advance our country’s research on blockchain and related technologies; we’re falling behind,” he says. “Eventually, I’d like to be a serial entrepreneur with businesses spanning several diverse sectors.”

Prior to enrolling at Pitt in 2017, McCraney, who was born in Hawaii and grew up in Tennessee and Virginia, was a petty officer first-class in the U.S. Navy. An aircraft electronics technician, he specialized in repairing communication and navigation equipment on the SH-60B Seahawk, P-3C Orion, F/A-18 Hornet and C-130 Hercules.