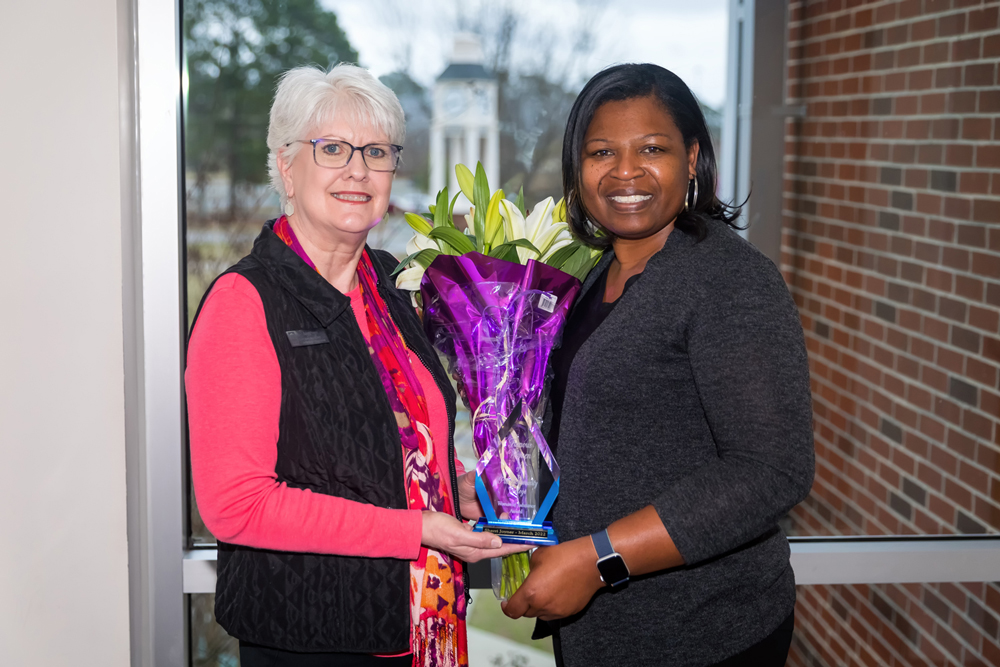 WINTERVILLE—For the past 12 years, Sherri Joyner has been preparing Pitt Community College criminal justice students for law enforcement careers while showing them that hard work, perseverance and doing things the right way leads to success.

On Wednesday, Joyner discovered just how much those efforts have been appreciated. During PCC’s annual Women’s History Month program, she was presented with this year’s Woman of Substance (WOS) Award in recognition of her campus and community involvement, caring attitude, and willingness to go the extra mile.

“Winning the 2022 Woman of Substance Award brought a feeling of joy that I am making a difference to the PCC and Pitt County community,” she said.

Joyner, one of six WOS nominees, joined PCC in 2010 as a Criminal Justice Technology instructor. She was named the program’s department chair in 2017.

“Sherri is a teambuilder who inspires individuals to work together to achieve success,” said Dan Mayo, dean of PCC’s Public Services & Fine Arts Division. “She’s modest about her achievements, puts the needs of others ahead of her own, and exemplifies the very best in leadership as an advisor, mentor, coach, colleague and friend.”

PCC Criminal Justice Technology Instructor Mike Nicholson nominated Joyner for the award. In doing so, he said she “leads from the front” by serving as a source of encouragement for faculty she supervises and setting a tremendous example for them “in every aspect” of college classroom instruction.

“She genuinely cares for her fellow employees and is always known as someone you can count on or call on for help,” Nicholson said. “She is certainly a ‘woman of substance.’”

Nicholson said that in addition to a busy teaching schedule, Joyner serves on various PCC committees and participates in numerous college-related activities. She is also an advisor with the PCC Student Ambassador Program.

A Beaufort native, Joyner grew up in the North River community, where she says “finances and resources were limited” and “the general perception was that few would leave the community after high school to pursue better jobs or attend college.”

But that is precisely what Joyner accomplished. She earned an associate in arts from Louisburg College in 1996 before moving on to East Carolina University to complete a bachelor’s degree in criminal justice in 1998 and a master’s in the field five years later.

After serving in various capacities at the Pitt County Courthouse between 1998 and 2010, Joyner discovered her true calling when she received an adjunct teaching opportunity at Wilson Community College.

“I knew that I could make a difference in the lives of students who had an interest in criminal justice from the experience and knowledge I gained working in the field,” she said, adding that her goal remains educating and empowering students for law enforcement success.

“I hope that students can take away from the Criminal Justice Technology program that they can achieve any goal and advance in careers they desire,” she said.

Joyner’s positive influence extends beyond the PCC campus. She and her husband, Mike, volunteer with Greenville’s Jackie Robinson Baseball League, and since 2016, she’s coached the GHA Stars Rookie coed team. Nicholson says it’s given her a chance to mentor and serve as a spiritual guide to countless children.

“She takes pride in letting them know they are loved and are part of something bigger than themselves,” he said. “… There’s no amount of words that can describe the impact she has made on these youths. Her dedication to ensuring the children understand the importance of hard work and good sportsmanship are lessons that each of her players will carry for a lifetime.”

Outside of work, Joyner, a mother of two, says she enjoys spending time with family, traveling, volunteering in the community, and supporting her children in their athletic and academic activities.