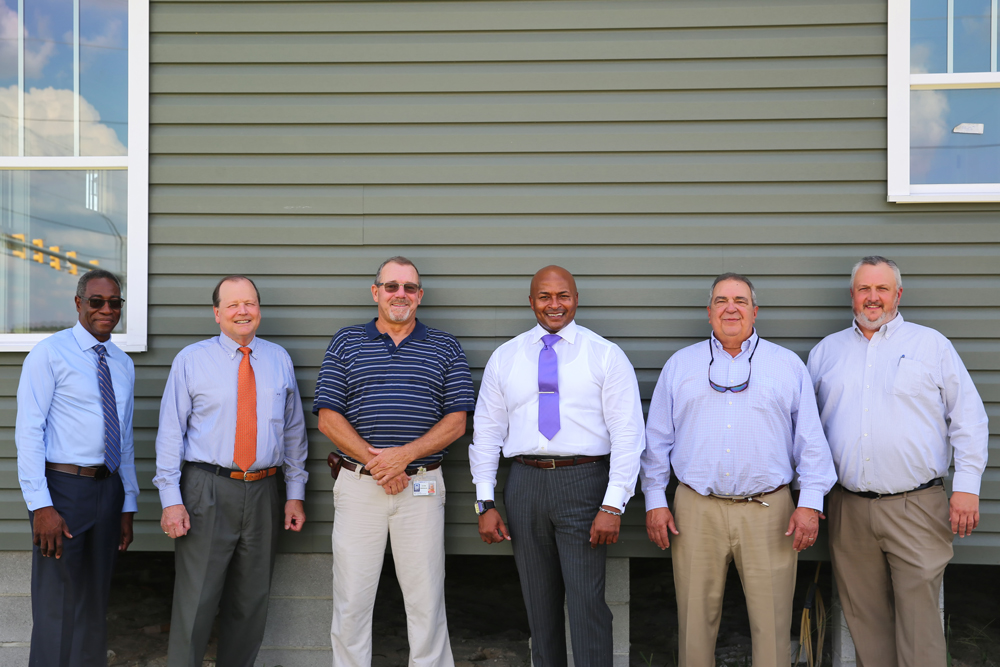 Carver, who was appointed interim president this summer by the State Board of Community Colleges, was joined on the tour by Scott Farmer, executive director of the N.C. Housing Finance Agency, and Paul Jaber, a Rocky Mount mortgage banking executive. Their first stop was a home students from several PCC Construction & Industrial Technology (CIT) programs are building as part of their college coursework.

PCC Building Construction Technology Instructor Glenn Morrison explained to the visitors how Pitt students have been building homes on campus since 1988 to gain knowledge and extensive hands-on experience in the construction trades. The homes are sold by auction once they are completed to generate funding for future student building projects.

“They were truly impressed by the quality of the home and its features, which led to discussion of the rising cost of materials for the student building projects and their availability,” PCC President Lawrence Rouse said. “The good news is there is great demand for our CIT graduates, and they are finding well-paying jobs.”

Rouse said Carver, Farmer and Jaber are looking into the possibility of developing a program in which students from various construction trade curricula work on rehabilitating homes in their communities as part of their training.

“I’m proud they see our building construction program as a crown jewel in the N.C. Community College System and wanted to see it firsthand,” Rouse said.

Carver, who was president of Nash Community College from 2005 to 2019, was appointed interim president after Thomas Stith III’s resignation in July. He served as interim NCCCS president in 2020 as well, after Peter Hans left to become president of the University of North Carolina System.