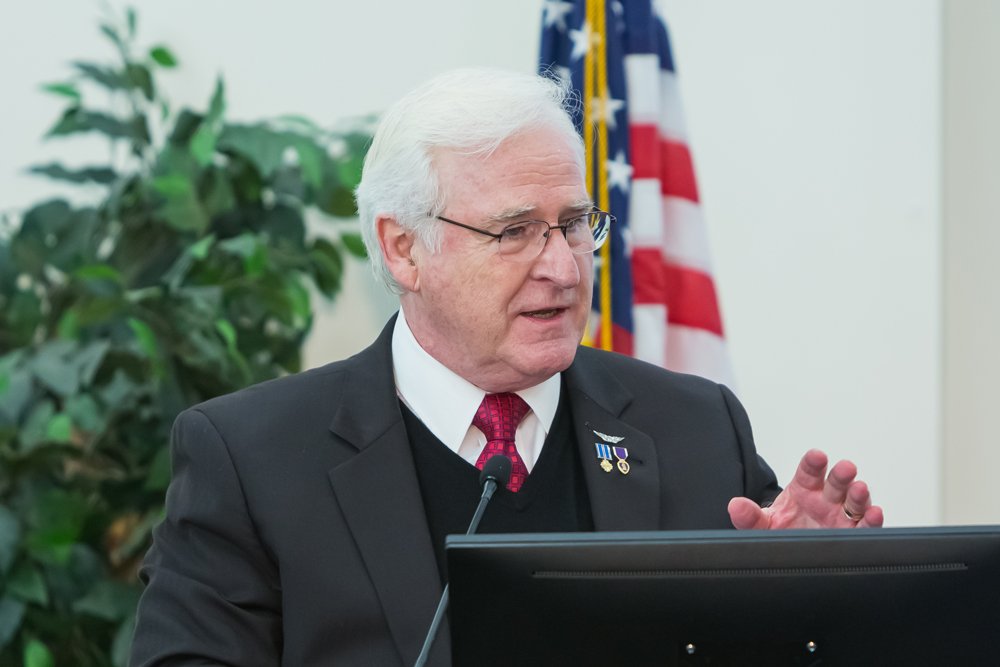 WINTERVILLE—For 27 years, eastern North Carolinians looked to Allan Hoffman for their local news — many never aware the longtime WNCT anchor was a Vietnam veteran and even fewer who knew he’d been shot down twice during the war and lived to tell the story.

During a presentation at Pitt Community College Thursday, Hoffman shared his Vietnam experiences with those who came out for the 22nd Annual PCC Veterans Salute. As the program’s featured speaker, the former combat helicopter pilot expressed his appreciation for the sacrifices veterans have made for their fellow citizens and reminded everyone of the important role they once filled as the “tip of the spear” preserving America’s freedom.

“As long as we remain the ‘land of the free,’ we have to remain the ‘home of the brave,’” Hoffman said, adding that most vets “gave something of themselves to defend this country” while others made the ultimate sacrifice.

A native of Jacksonville, Fla., the 73-year-old Hoffman says he still thinks about Vietnam “every single day.” He flew more than 2,000 missions there as a chief warrant officer with the Army’s 170th Assault Helicopter Company and received many awards for his service, including the Distinguished Flying Cross (for valor), Purple Heart, Bronze Star (for valor), Air Medal (for valor) and Vietnamese Cross of Gallantry.

Anyone who has watched an episode of “The A-Team” has witnessed Hoffman at the controls of a Huey helicopter. The show’s opening sequence includes war footage of him dropping soldiers off into waist-high elephant grass common to Vietnam.

During his PCC presentation, Hoffman said his journalism career began in Vietnam. He explained that in addition to his duties as a pilot, he was tasked with writing and submitting stories to “Stars & Stripes” about the “amazing” acts of heroism displayed by members of his unit.

Hoffman would go on to have a 42-year career in broadcast news, often highlighting topics important to vets, including PTSD, concussion trauma, homelessness and research being done to treat those issues before retiring in 2012.

In addition to Hoffman, the Veterans Salute, which was sponsored by the PCC Student Veterans Association (SVA), featured performances by PCC music students, a JROTC Color Guard from North Pitt High School, and remarks from PCC President Lawrence Rouse.