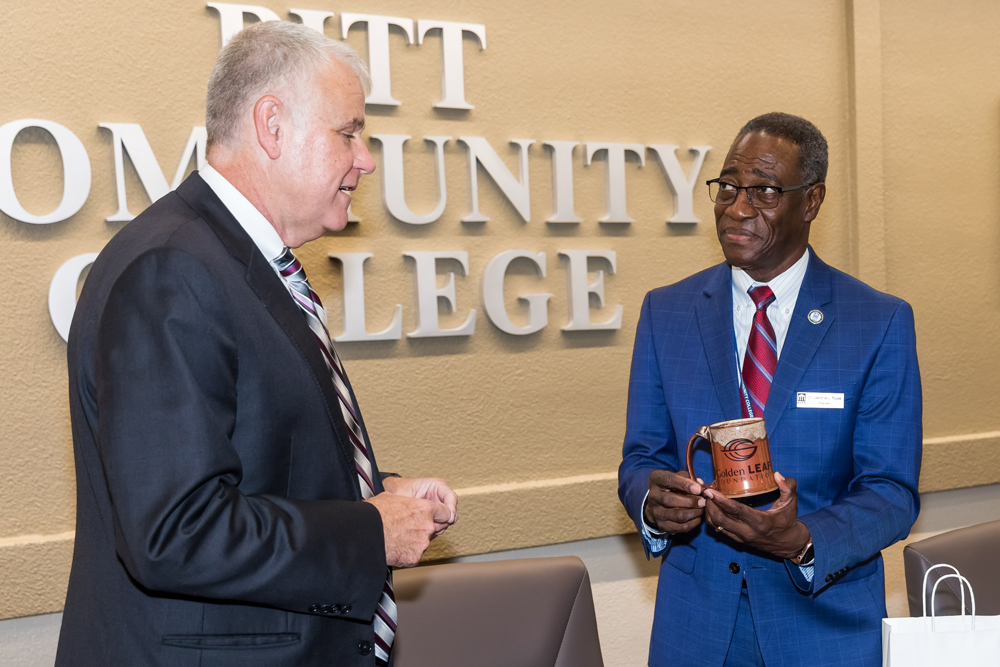 The visit, according to PCC President Lawrence Rouse, gave college administrators an opportunity to discuss workforce development with Golden LEAF Foundation President Scott Hamilton and Program Officer Jason Rochelle. He said it was also a chance for Golden LEAF officials to tour programs and areas of campus their foundation has directly supported over the years.

“Pitt Community College’s tremendous relationship with the Golden LEAF Foundation has produced a number of quality educational initiatives,” Rouse said. “Having President Hamilton and Mr. Rochelle on campus was a chance to show them our appreciation for Golden LEAF’s support and let them see how their organization’s financial assistance is making a positive difference in the lives of eastern North Carolinians.”

Held Aug. 31, the tour began in the Walter & Marie Williams Building, which has housed Pitt’s Science, Technology, Engineering and Mathematics programming since opening in 2017. Biotechnology Department Chair Christy Weeks spoke to the group about PCC’s effort to prepare students for work in companies that use living organisms to make or modify processes for specific purposes, such as agriculture and medicine.

Dr. Thomas Gould, PCC Executive Vice President of Academic Affairs and Student Services, participated in the tour and said the longtime partnership between PCC and Golden LEAF has centered on local and regional workforce and economic development.

“Golden LEAF’s support has been essential in allowing PCC to move forward on many important workforce development initiatives, including the college’s Pharmaceutical Services Network and the PCC-PCS Technical Academy,” Gould said.

Established in 1999 to build economic opportunity across North Carolina with money the state received from the National Cigarette Manufacturer Settlement Agreement of 1998, the Golden LEAF Foundation has partnered with state and local governments and other foundations on more than 2,000 projects totaling $1.19 billion. The foundation has made a lasting impact on North Carolina’s tobacco-dependent, economically-distressed and rural areas by helping create 66,000 jobs, $700 million in new payrolls and more than 90,000 workers trained or retrained for higher wages.