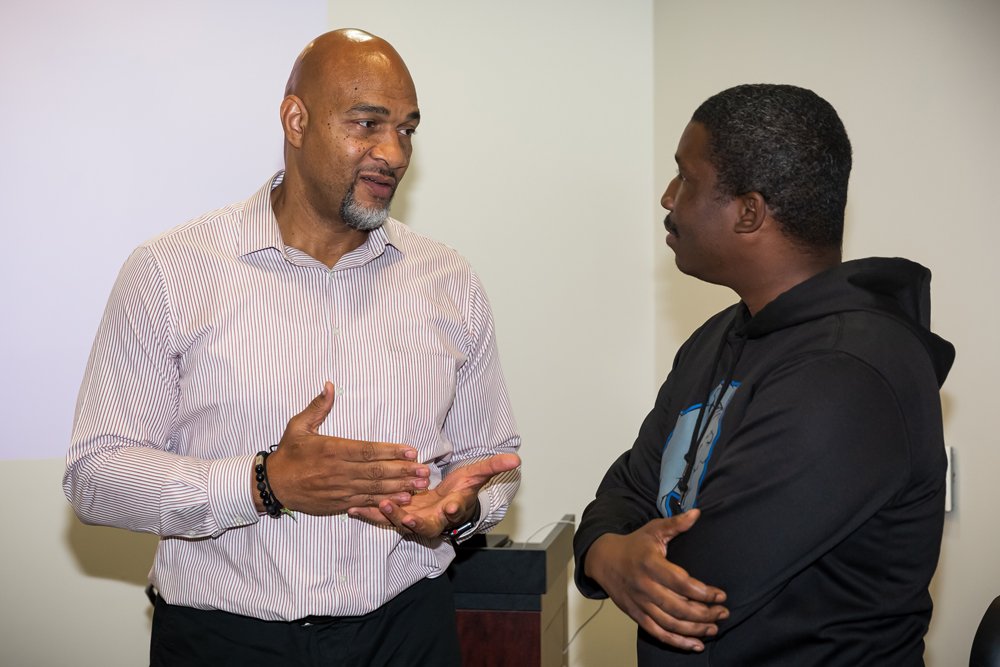 WINTERVILLE—Students participating in a new speaker series at Pitt Community College got to meet former NBA star Blue Edwards and hear him share his story of success.

Edwards, who played professionally for 12 years after being selected in the first round of the 1989 NBA Draft, spoke at Pitt Wednesday as part of the PCC Minority Male Success Initiative’s “Securing the Bag: Black Males and Workforce Development” speaker series. Each month, the series features successful black males from the community discussing their personal and professional journeys.

“Success is certainly the focus of the presentations, but the series also takes an unflinching look at the barriers black males encounter in their pursuit of success,” said Jasmin Spain, PCC Assistant Vice President Student Development & Community Standards. “It examines what can be accomplished with dedication, the right support system, and investment from educational institutions dedicated to the success of black males.”

Spain said “Securing the Bag” – an expression meaning to take advantage of a situation and keep something of value – began in September with a presentation by Wayne Washington, Human Resources Manager at Greenville’s Hyster-Yale Group.

As October’s featured speaker, Edwards discussed challenges he overcame in high school and college on his way to success. He recalled being in his mid-teens when he made up his mind that he was going to play in the NBA and began working to achieve that goal. Since he didn’t have a basketball hoop at home, he’d jog down the street to a neighbor’s house and use her goal to practice on.

Edwards, a former East Carolina University basketball standout, told students they can expect to face adversity in life. He then challenged them to believe in themselves and use the hardships they encounter to grow and get better.

Following his remarks, the Greene County native took questions from students, which led to stories about going toe-to-toe with legendary players, like Magic Johnson, Larry Bird and Michael Jordan. He recalled in great detail a game in which he was tasked with guarding ‘His Airness’ as a member of the Utah Jazz.

Three decades have passed since that matchup, but Edwards still remembers Hall of Fame coach Jerry Sloan asking him to hold the legendary Chicago Bull to his scoring average (roughly 37 points per game at that point in the season) and “make him work for everything” he did on the court.

After pointing out that playing defense against arguably the best basketball player of all-time was exciting, challenging and “scary,” Edwards said his strategy entailed avoiding trash talk that could ignite a Jordan scoring frenzy and staying focused on the “23” sewn on his jersey. It paid off, as he helped the Jazz rally from seven down with 40 seconds remaining to win at the buzzer, 108-107. In fact, it was Edwards’ successful defense of a Jordan scoring attempt in the waning seconds that produced a turnover that set up Utah’s game-winner.

Now 53 years old, Edwards is far removed from the days of thrilling basketball fans with his skill and athleticism, but he’s still actively involved with basketball. In 2018, he took the helm of the boys’ basketball program at Greene Central High School, his alma mater.

As the Rams’ head coach, Edwards draws upon the lessons he learned as a professional basketball player to develop offensive and defensive strategies he hopes will lead to victories. He also calls upon those experiences and the lessons life has taught him to prepare his players for success off the court.

At PCC, Edwards encouraged students not to settle for “just getting by” in life. He illustrated his point by saying that even though his Greene Central players are eligible to compete with passing grades, that standard isn’t good enough for him.

“If you don’t have an 80 average, you aren’t going to play for me,” Edwards said, before explaining that he wants members of his team to do better in school, on the court and in life.

“I want my players to do their best in classroom,” he said. “Some of them may not play college basketball. They may not play in the NBA. But I don’t want them to end up on a (street) corner” when their basketball careers are over.