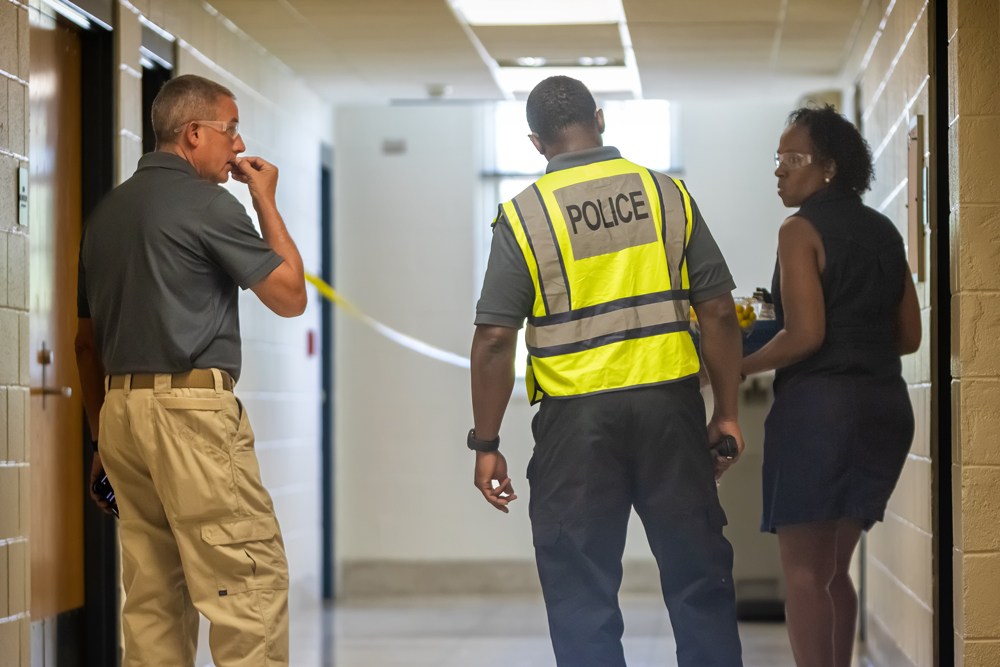 WINTERVILLE—Pitt Community College employees used the lull between semesters this week to learn about effectively responding to violent critical incidents.

The potentially lifesaving training took place on campus Aug. 8-9 and was led by Navigate360 instructors George Hunter and John Gilbert Jr. The central theme of their instruction was getting people to participate in their own survival if attacked, until emergency personnel can arrive.

“There’s still traditional lockdown going on in this country, and it’s still not working,” Hunter said. “… We’ve got to have something better.”

For Hunter, a former sheriff’s deputy with 27 years of law enforcement experience, “something better” is calling 911 and running from danger, using non-traditional exits if needed, as soon as it’s safely possible. It’s also delaying or denying an attacker’s entry, countering the aggressor through distraction and control techniques, and other measures.

“We’re talking about surviving a violent critical incident … we’ve got to be doing something,” Hunter said. “… I have one life to live, not one life to give.”

Hunter said analysis of active shooter incidents, including the ones at Columbine High School in 1999 and Virginia Tech in 2007, has shown “it doesn’t take long to kill many people.” He said, on average, perpetrators fired one round every four to 15 seconds and hit targets at a 50-70 percent rate. For every two people struck by bullets, one never made it back home.

At Virginia Tech, a lone gunman needed just nine minutes to kill 30 of the 47 students and faculty he shot in an academic building. In Newtown, Conn., a single shooter fired 156 rounds in Sandy Hook Elementary School, killing 26 and wounding two in less than five minutes.

“We turn the lights out, close the blinds, shut doors and put red or green cards under the door—that defeats the purpose,” Hunter said. “It’s insane, because it’s letting the shooter know where people are.”

Near the conclusion of their training, PCC employees participated in active shooter simulations that hammered home the concepts taught earlier in the day.

PCC partnered with Navigate360 this year, after the mass shootings in Buffalo, N.Y., and Uvalde, Texas. President Lawrence Rouse explained the college is committed to providing a safe and secure environment for students, employees and visitors.

“We must be proactive when it comes to safety,” Rouse said. “By teaming with Navigate360, PCC is helping employees develop skills and strategies for responding to violent critical incidents while hoping they never have to use that training.”