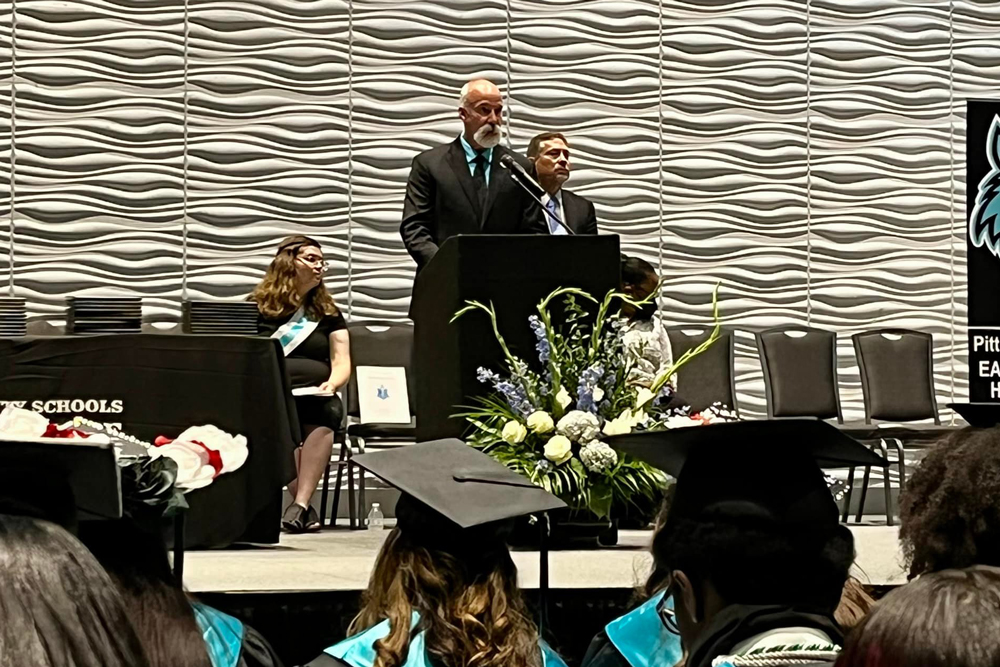 The event gave Principal Wynn Whittington a chance to congratulate this year’s 50-member graduating class on a job well done and praise them for leading the charge to establish ECHS as a premier institution.

“From the day you first walked in the doors and through a pandemic, you have set the example for others to follow, established traditions, and helped shape our school and our staff,” he said. “Your leadership and vision are unrivaled.”

Opened in 2015, ECHS is located on Pitt Community College’s main campus in Winterville and features a curriculum that includes college and high school classes focused on science, technology, engineering and math. Whittington said the hard work of this year’s graduates and their peers has earned ECHS numerous accolades, including National Distinguished Title I School honors two years in a row.

“Four to five years ago, you took a leap of faith … and you bought in to what this old man was selling — an opportunity to change your lives forever, to put yourselves in a position to be anything you wanted to be,” Whittington told the Class of 2022. “Today, we arrive at the first milestone, the end of the first chapter in your book of life.”

Whittington says this year’s graduates have been accepted to some of the country’s most prestigious colleges and universities. Collectively, they were awarded more than $1.2 million in scholarships, he said.

Haili Martinez, who spoke during graduation, will be attending UNC-Chapel Hill this fall. She plans to major in nursing and hopes to work someday as a nurse educator.

“My main goal in life is to make an impact on the lives of others and facilitate a safe medical environment for black women,” the 18-year-old Greenville native said.

While Martinez and most of her classmates will pursue four-year degrees, Whittington said one graduate is joining the U.S. Air Force and 12 are entering the workforce, including six who have been selected to participate in the Pharma K12 Workforce Training Development Initiative. Established by the N.C. Biotechnology Center and sponsored by Thermo Fisher Scientific, the specialized training program offers select Pitt County students an introduction to commercial drug manufacturing, so they are primed for entry-level production jobs.

No matter what they decide to do in life, Whittington encouraged graduates to “give thanks to the ones who helped you get here and pay it forward.” He advised them to set goals, follow their dreams and not let anyone get in their way.

“I encourage you to be the person who cures cancer, who helps win wars, who speaks for those who have no voice, or the one who just makes the world a better place,” he said. “Continue to evolve. As you evolve, have an insatiable thirst for learning. Continue to use technology as a tool to make a difference and not as a crutch or an instrument of destruction, disrespect or torture.”

For graduate Jovanny Pereyda, the last part of Whittington’s advice should be a cinch. Last year, he helped develop the “Ready, Set, Route” application as part of a statewide competition that asked students to create apps that solve problems in their respective communities.

The app Pereyda helped create may someday serve as a communication resource for Pitt County Schools bus drivers and students. It can let drivers know which students are riding the bus each day and give students an idea where their buses are and when they will arrive.

“This app not only saves time, but it also saves money, because shorter routes means less gas,” Pereyda told a local news station, after his group claimed third-place in the competition.

Like Pereyda, all Class of 2022 members have extensive public service experience. In fact, they were required to perform at least 100 hours of community service as ECHS students, meaning this year’s graduating class volunteered more than 5,000 hours in Pitt County.