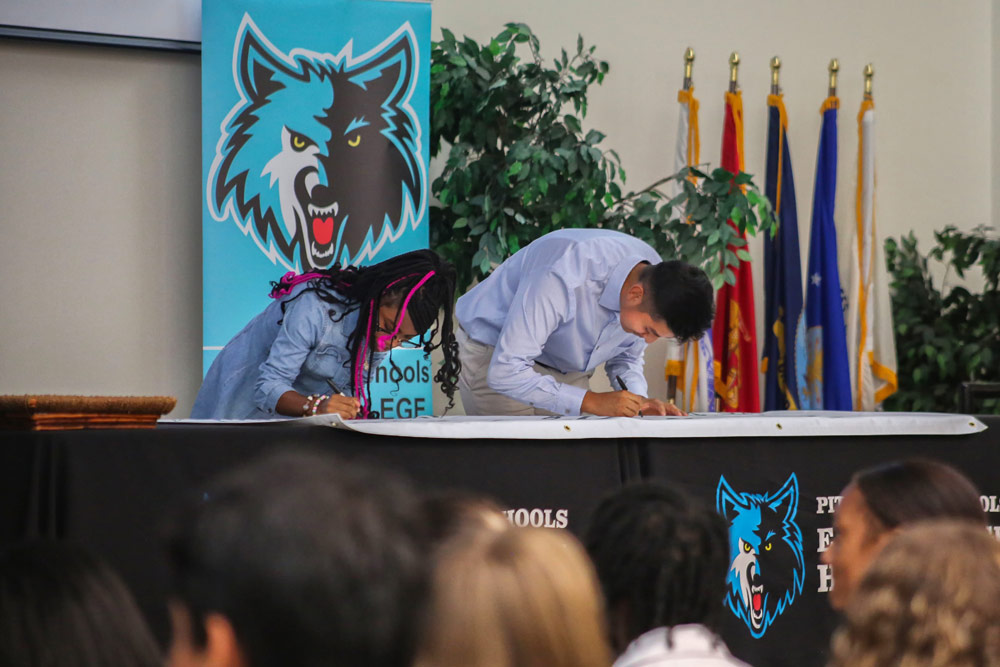 WINTERVILLE—Pitt County Schools Early College High School (ECHS) freshmen signed a banner last month, pledging to faculty, staff, classmates and themselves that they will do their best academically in the years ahead and earn diplomas.

The signing was part of the school’s annual Commitment Ceremony that took place Aug. 26 on Pitt Community College’s main campus, where ECHS is located. It featured 74 students receiving academic excellence pins before signing a banner provided by Jostens that now hangs in their school’s hallway as a daily reminder of their commitment to graduate together.

“We are honored to be here today to share in this special event marking a commitment to graduate as an entire class,” ECHS Principal Wynn Whittington said to those gathered for the ceremony. “We like to think of this as a dress rehearsal for graduation in just a few short years.”

Whittington, who has served as ECHS principal since it first opened in 2015, told students their signature “not only binds you to completing this program but also to holding your peers accountable.” It’s a winning formula, as ECHS has earned numerous performance accolades in a relatively short timeframe, including National Distinguished Title I School honors two years in a row.

“The bedrock of our school culture lies in three words that are of great value to who we are: character, consistency and commitment,” Whittington said. He then asked class members to “make good decisions based on the ‘three Cs.’”

With an enrollment of 330 students, ECHS features a curriculum consisting of college and high school classes focused on science, technology, engineering and math. Students can graduate in four to five years with a high school diploma from ECHS and associate degree from PCC.