New ECHS Facility to be Ready in Time for Fall Classes 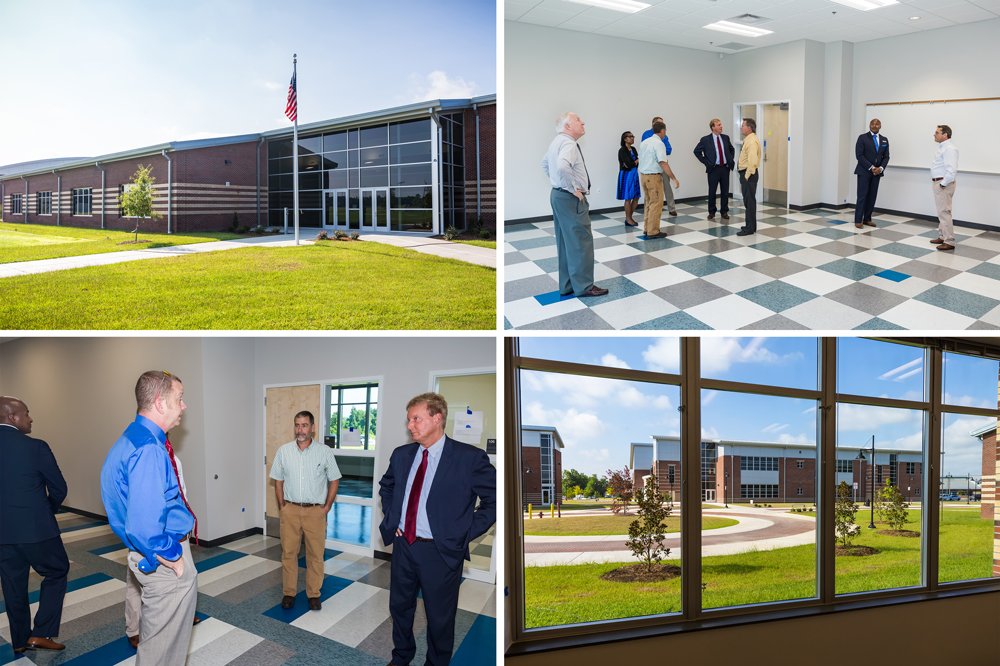 WINTERVILLE—Three years after their first day of high school, the first class of Pitt County Early College High School (ECHS) students will be seniors when they enter a brand new building to close out their secondary education careers.

Less than a year after construction began on the Pitt Community College campus in October, a new home for ECHS will open to students, faculty and staff when their fall semester gets underway Aug. 6. It will be the first academic year that the school features students in all four high school classes.

“We’re looking forward to seeing ECHS students enjoying their new school next month and happy we can say the project was completed on time and within budget,” said PCC Vice President of Administrative Services Rick Owens.

Designed by Greenville’s JKF Architecture, the new ECHS is a single-story brick structure located on the western side of Pitt’s main campus, near the Charles E. Russell and Walter & Marie Williams buildings. Goldsboro-based Daniels & Daniels Construction is expected to have the finishing touches completed and the project wrapped up July 25.

“Our students are going to love it … having larger classrooms [and] a safer building,” said ECHS Principal Wynn Whittington. “I am excited about the new building and grateful for such a nice facility.”

At a cost of approximately $3.4 million, the new home for ECHS’s 275 students and 16 faculty and staff members is 13,000 square feet. It features eight classrooms and a multipurpose room.

Whittington said the new building offers an environment “more conducive to learning.” It has plenty of natural lighting and will allow more space for students to spread out and work on projects, he said.

“Our school environment is exceptional, and the relationships between students, staff and parents is a model for others,” Whittington said. “… We are blessed to have this school and appreciative of all who have supported this endeavor.”

Opened Aug. 10, 2015, ECHS is the product of a partnership between Pitt County Schools (PCS) and PCC. Instruction centers on science, technology, engineering and math, and enrollment is competitive.

ECHS students, who participate in PCC clubs and organizations and student activities throughout the academic year, can graduate in four to five years with both a high school diploma and an associate degree from Pitt. In fact, out of the first 75 students to enroll in ECHS, 22 are on track to receive diplomas and two-year degrees next spring.

“… ECHS has experienced tremendous success, including being named an ‘A’ school in North Carolina,” said ECHS Liaison Erin Harvey. “Our students have been accepted into Governor’s School, the state government page program, the Institute for Future Agricultural Leaders, and other prestigious opportunities and events. At this moment, ECHS has students enrolled in more than 10 academic programs at PCC.”

Harvey and Whittington agree that Aug. 6 will be a day to remember for ECHS, as the school looks to build upon the success it experienced in 2017-18.

“We have been very successful thus far academically as well as culturally,” Whittington said. “Last year, we were in the top five percent in growth for the entire state and were one of four finalists in North Carolina to be considered for recognition as a National Distinguished Title I School.”

Once the new ECHS facility opens for classes, the modular units that have served as the high school for the past three years will be removed from the PCC campus, Owens said, adding that they are PCS property.