Distinguished Service Awards Are Presented to Massey and Overton during Graduation 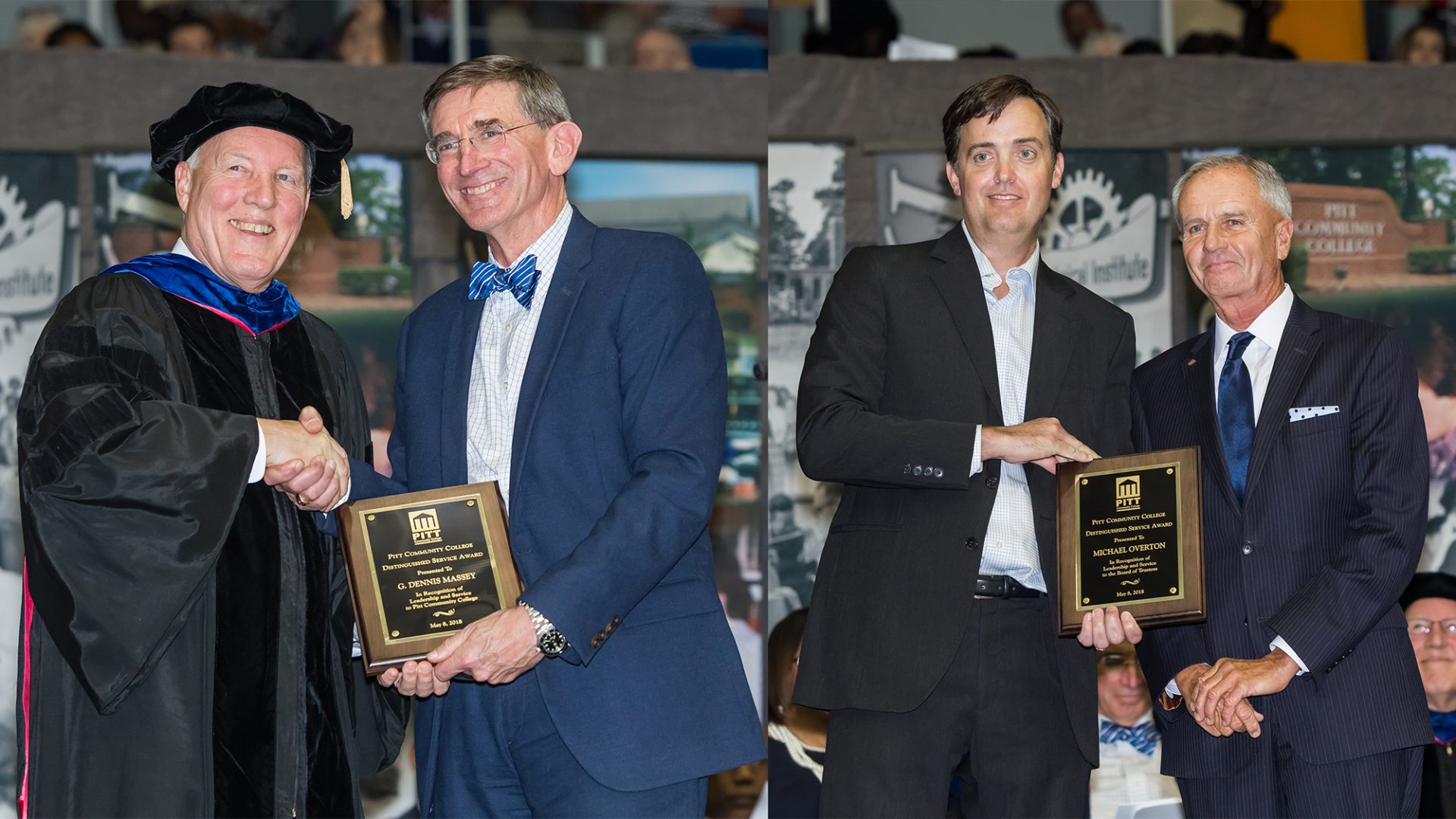 GREENVILLE—Pitt Community College Trustees took a moment during Tuesday’s graduation ceremony to show their appreciation to a pair of individuals who have demonstrated outstanding service to PCC and the community.

Massey, who announced in September that he will retire this summer after 15 years with Pitt, is one of only four people to have served as PCC president since the college was established in 1961. The Kentucky native has spent 46 years working in higher education.

PCC Trustees hired Massey to replace retiring President Charles E. Russell. As president, he has focused on student achievement, program completion and career placement – and the college has grown considerably.

“I am very grateful for the solid and consistent support Pitt Community College Trustees have provided me over the 15 years since the 2003 Board [of Trustees] offered me the opportunity to lead this distinguished college,” Massey said during Tuesday’s commencement address.

“The successes and value added, including a strong continuing vision for PCC’s future, are the result of a true collaboration of you, our community partners, the outstanding faculty and staff of PCC and, of course, the students we are honoring today and those who came before them,” he added.

With Massey as president, PCC has become North Carolina’s sixth-largest community college in terms of student credit hours. It serves more than 23,000 students in credit and non-credit programs annually – approximately twice as many as it did when Massey started. Of the 18 buildings now on Pitt’s main campus, half were constructed during Massey’s presidency.

“I would never have been able to take up the challenge of leading this remarkable and continually-evolving college without the strength and vitality, and the intelligence and love of my wife, Chikako,” Massey said. “She is my true inspiration and model for so much that I do, who helps me see the world through different eyes that have always been so dear to me.”

A Greenville native and 1996 ECU graduate, Overton served four years as a PCC Trustee. Appointed by former N.C. Gov. Pat McCrory in 2013, he completed a four-year term on the board on June 30, 2017.

PCC Trustees Secretary Don Mills presented Overton with his award and credited him with providing “both insightful suggestions as well as solid counsel for the college during a very active and busy period of time.”

As a trustee, Overton served on the board’s Finance and Audit Committee all four years, including service as the committee’s chairman in 2016-17. He also served as chair of the Buildings and Grounds Committee in 2015-16, a pivotal time in the development of the Walter and Marie Williams Building that opened in August 2017.

Prior to his current job as owner of The Overton Group, LLC, Overton carried out a number of important roles with the world’s largest watersports catalog company, Overton’s, Inc. In addition to an N.C. general contractor license, he has a broker’s license in North and South Carolina.

In addition to his work with the PCC Board of Trustees, Overton has served on the ECU Board of Visitors, the Greenville Planning Board, and the Board of the Pitt County Committee of 100.

PCC Trustees have presented Distinguished Service Awards during spring commencement since 1989, when they created the honor to recognize individuals for their efforts to enhance the college’s mission and services.