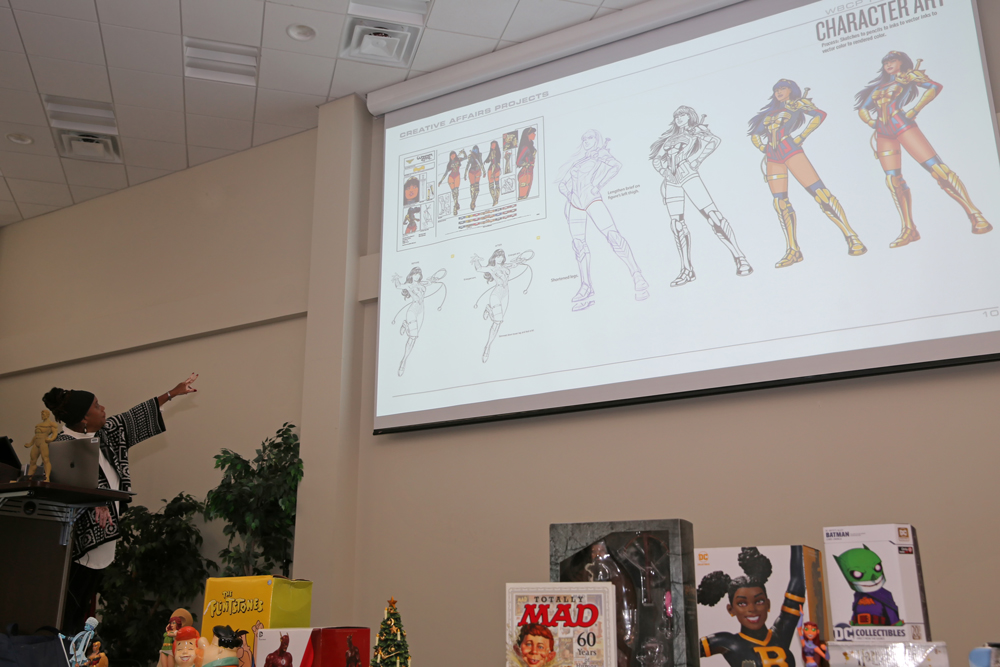 WINTERVILLE—Pitt Community College students preparing for careers in the fields of fine arts and graphic design had a unique opportunity last week to hear from a leader at one of the nation’s largest entertainment industry companies.

On Monday, Janice Walker, senior art director with DC Entertainment’s Creative Affairs Division, visited campus to discuss her role with the production arm of DC Comics – the company responsible for bringing the world superheroes like Superman, Batman and Wonder Woman, as well as villains, including The Joker, Penguin and Lex Luthor. Walker has spent nearly four decades with DC Entertainment, a subsidiary of Warner Bros. Discovery, after being hired as a graphic designer by illustrator Joe Orlando in 1986.

“Janice’s visit was just incredible,” said Charity Valentine, chair of PCC’s Fine Arts Department. “She is the first visiting artist we’ve had come to campus since the pandemic, and it was the best-attended artist talk we’ve ever had.”

With the original 3D character sculpture of Superman nearby, Walker spoke with students gathered in PCC’s Davenport Multipurpose Room about taking classes at a Michigan community college as a high school student before moving on to New York’s Pratt Institute to study Graphic Design and Illustration. She discussed her career background and the evolution of her job responsibilities with DC Entertainment in a presentation that touched on a wide range of topics.

“Ms. Walker’s visit was particularly timely for our students,” said Dr. Eleanor Willard, chair of PCC’s Advertising and Graphic Design Department. “Her explanation of using Pantone colors for character skin tones and costumes and her insight into comic character art and development lined up perfectly with what I was covering in class this week. It was awesome to be able to reference her presentation. Doing so gave so much more validity to what the students are learning in the classroom and really brought the material to life.”

Walker, who recently moved to North Carolina from California to be closer to family, works remotely for DC Entertainment. In addition to design work and hiring artists, she oversees various projects for TV, movies, merchandise and more. Though her role has become more administrative in nature over the years, Walker is still “living (her) best life” in the DC Universe. She says she’s always “hungry for more” and loves the hands-on nature of creative content design.

At the conclusion of her remarks, Walker fielded questions from students and gave away more than 45 pieces of DC/Warner Bros. memorabilia.

“The students stayed to talk with Ms. Walker long after the event ended; the questions just kept coming,” Valentine said. “It was wonderful to see the students so inspired.”