Cox to Serve as VP of Institutional Advancement 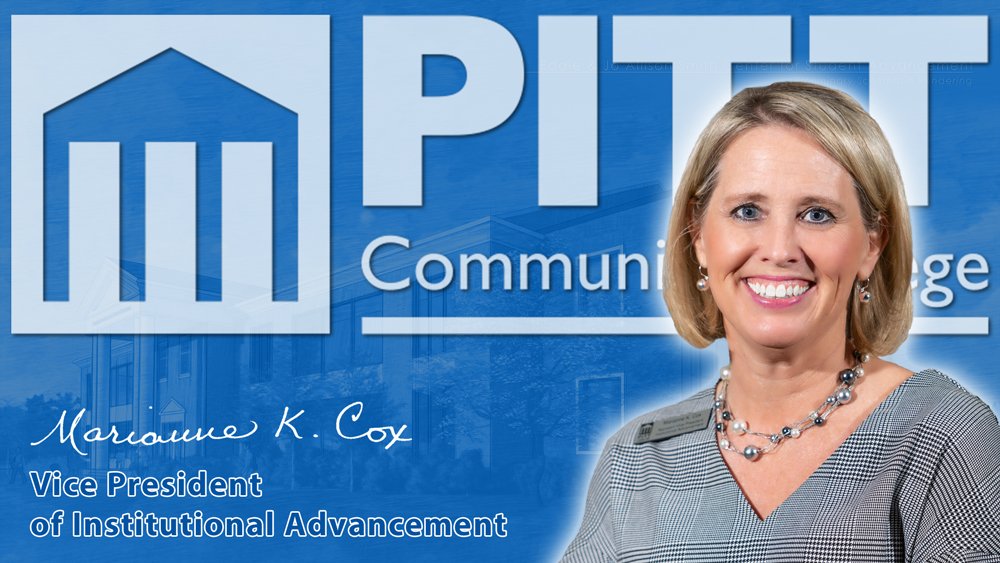 WINTERVILLE—Pitt Community College will have a new vice president of Institutional Advancement (IA) for the first time in nearly 20 years, when Marianne Cox takes over next month for the retiring Susan Nobles.

“I’m very pleased that Marianne Cox has agreed to serve as our next vice president of Institutional Advancement,” PCC President Lawrence Rouse said. “She has demonstrated through her work with PCC – and the VISIONS program, in particular – that she is dedicated to student success and making higher education accessible to everyone. Marianne’s professionalism, energy and creativity will ensure the tradition of excellence that our IA Division has been known for under the direction of Susan Nobles continues.”

Cox, who was approved by the PCC Board of Trustees in May, joined the college in 2011 to serve as coordinator of the VISIONS Career Development and Scholarship Program. She was named the program’s director in 2015 before being promoted three years later to assistant vice president of IA.

“I’m excited and grateful to have the opportunity to lead PCC’s efforts to build and foster relationships within the community and across campus,” Cox said. “Institutional Advancement fills an important role at Pitt. Everything we do is centered on supporting students and the college’s mission to educate and empower them for success.”

“Maintaining an active and visible Institutional Advancement Division is a tall order, but we’ve had the benefit of learning from Susan Nobles,” Cox said. “It’s never easy following in the footsteps of a legend. Thankfully, IA staff have a lot of experience, and that will make the transition smoother when Susan retires at the end of July.”

A Lenoir County native, Nobles began working at PCC in 1987 as director of Marketing and Public Relations before she was named vice president in 2000. She was also the PCC Foundation’s executive director and led capital campaign projects and secured gifts and donations for student scholarships and various educational activities.

During graduation this year, Miles Minges, who recently served as chairman of the PCC Foundation Board, presented a Distinguished Service Award to Nobles on behalf of the PCC Board of Trustees.

“… You will not find anyone with more heart, determination, loyalty and passion than Susan Nobles,” he said in presenting the honor. “… In every aspect of her job, she performs so selflessly. She loves Pitt Community College and seeing our students succeed.”

It is that kind of dedication and enthusiasm for serving PCC that Cox says she will emulate as vice president.

“At the top of my to-do list will be thanking community partners for their support of PCC and ensuring them that we will continue to be good stewards of the funds they’ve entrusted with us in support of students,” she said. “There’s always room for new partners and new fundraising events, too, so those will also be priorities. One thing I learned from Susan is to never be afraid to try something new, whether it’s a boat show in an agricultural center or a scholarship auction in an airport hangar.”

Cox says she will also focus on raising funds for the VISIONS program to match a substantial donation offer from the Eddie and Jo Allison Smith Family Foundation.

“The Smith Family Foundation has promised to provide as much as $2 million to the VISIONS program by matching every dollar the PCC Foundation raises for VISIONS this year with two dollars from their charitable organization,” she said. “The Smiths have been extremely generous to PCC over the years. They were key players in developing VISIONS in 2004 and have supported the program financially ever since.”

Married to Joe Cox, a college pastor with Covenant Church, the couple has lived in Pitt County since 1998, except for a two-year stay in Texas. They have two children, Madeline and Hayden, who are both in college.