College Honors 55 of Its Best and Brightest Students 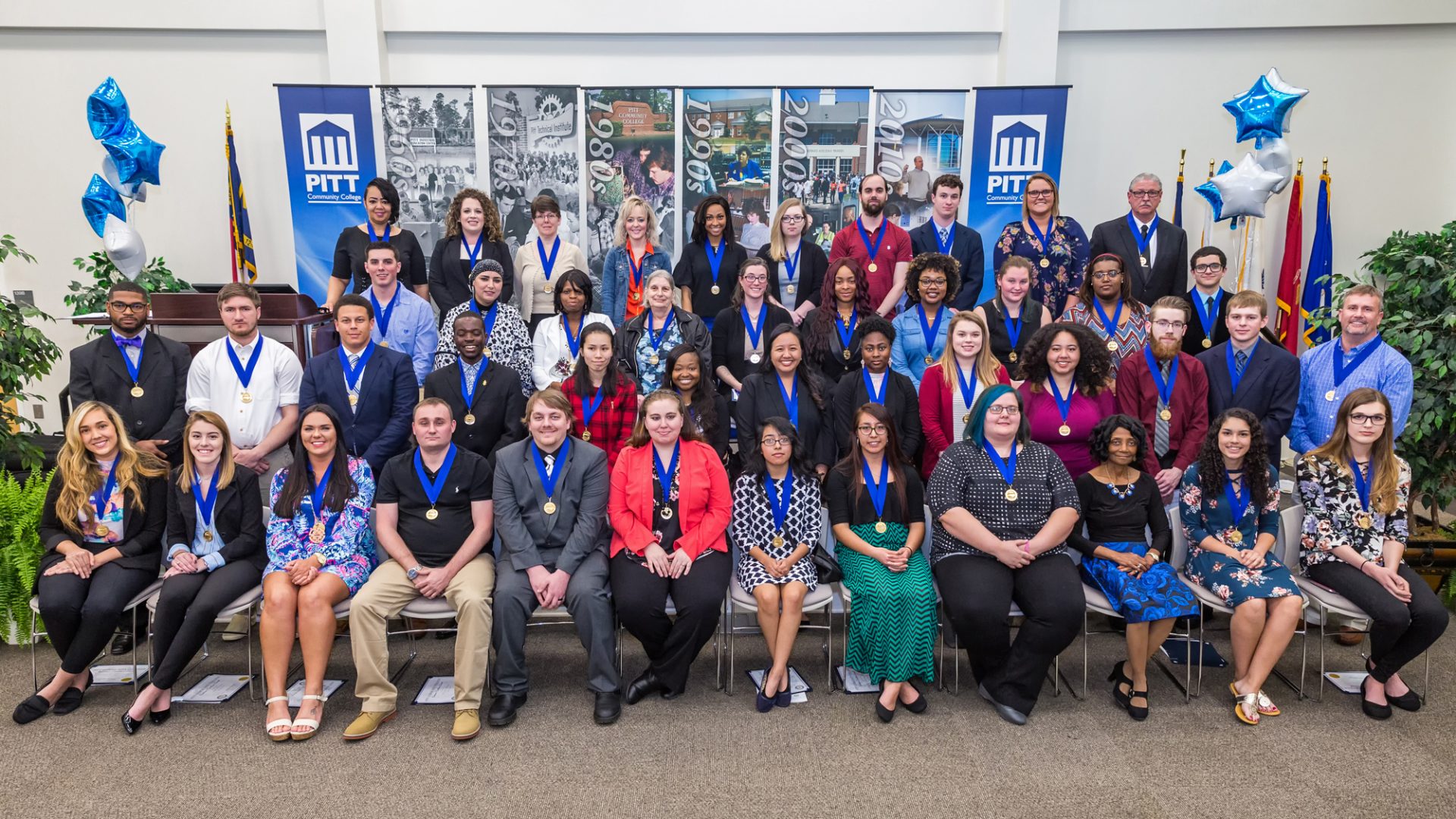 WINTERVILLE—Pitt Community College honored 55 of its best and brightest students this month, during the 2018 Academic Excellence Awards ceremony on campus.

The program, which is held each spring to recognize students for classroom, campus and community achievements, took place March 16 and featured opening remarks from PCC President G. Dennis Massey.

Massey, who has spent nearly 15 years as PCC president, said the college’s high-quality students and alumni are filling “vital roles in Pitt County, eastern North Carolina and beyond.” He said this year’s Academic Excellence Award recipients give promise to a bright future.

“What you see in these outstanding students is the power of excellence, not just upon their lives and those of their family and friends, but as an inspiration and example to all our students and employees,” Massey said.

All of this year’s Academic Excellence Award recipients were nominated by PCC faculty and staff. They received special medallions crafted by the college’s Machining Technology students to commemorate their achievement.

In addition to the presentation of those medallions, the program included remarks from Academic Excellence Award recipient Amira Ali, who explained what PCC has meant to her as an Early Childhood Education student.

A native of Egypt, Ali has lived in the United States for the past 15 years. She has lived in North Carolina since 2012 and says enrolling at PCC is the “best decision” she’s made since moving to Greenville.

“PCC is a great place for anyone who wants to work in the Early Childhood Education field,” Ali said. “Teaching early childhood education will be a delight for me, as I love children so much and enjoy spending time with them.”

Ali, who is on track to graduate in May, has a 3.95 GPA and was PCC’s selection for the N.C. Community College System (NCCCS) Academic Excellence Award. She’s made the Dean’s List and is an active member of the PCC International Club, Phi Theta Kappa (PTK) Honor Society, Gamma Beta Phi Society, and National Society of Leadership and Success (NSLS).

“(Amira) has strong academic prowess and possesses a willingness to use what she learns – not only for the benefit of her own academic progression, but also for the good of her family, her community, and even the world,” said PCC Developmental English and Humanities Instructor Regina Garcia, one of four faculty members to nominate Ali.

In addition to her academic responsibilities and duties as a mother of four, Ali still manages to make time for community service. She volunteers at Greenville’s The Oakwood School several hours each week, helping out with the booster club, assisting the Fine Arts Support Team during concerts, and tutoring Arabic classes. She also chairs the school’s International Festival Committee.

Zaria Kornegay, a Dean’s List student with a 3.70 GPA, received the 2018 President’s Scholarship worth $500 to help pay for tuition and fees as she pursues a degree in Radiography. Kornegay is vice president of PCC’s PTK chapter, a member of NSLS and the National Council of Negro Women for the Greenville-Pitt County Area, a volunteer at Golden Living and East Carolina Pediatrics, and a tutor at Farmville Central High School.

Andrea Nunez Nunez, an Architectural Technology student with a 3.94 GPA, received this year’s President’s Award worth $500 for outstanding academics, leadership, volunteerism and service to the college. A recipient of the National Association of Women in Construction Scholarship, she is a Dean’s List student, PCC International Club member, and math and Spanish tutor. She also volunteers as a medical interpreter at the Third Street Community Center in Greenville.

Special awards were also given to several students for excellence in Developmental Studies courses. This year’s recipients were Alivia Daigle, Dontrell Jones and Ali. Daigle and Jones received $125 each for their awards while Ali was awarded $250, since she was also an Academic Excellence Award recipient.

Mary Stroud, an Advertising and Graphic Design student with a 4.0 GPA, was named PCC’s nominee for NCCCS’s Gov. Robert W. Scott Student Leadership Award. Mary Sue Miller, an Associate in Arts students who first came to PCC in 1965 but was unable to complete her studies at that time, was announced as the college’s nominee for the Dallas Herring Achievement Award from NCCCS.