PCC to Go Smoke-Free Prior to Fall Semester Start 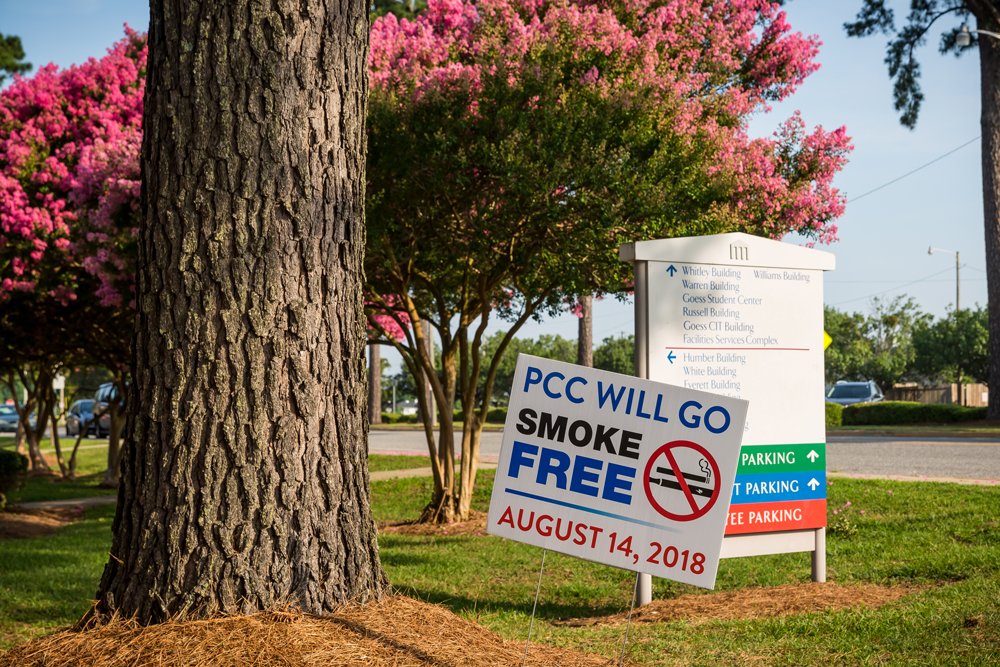 WINTERVILLE—When a new academic year begins at Pitt Community College next month, a new policy will be in place to create a smoke-free campus.

After more than a year of gathering feedback and educating the campus community about the hazards of smoking—and nine years since the first smoking policy was enacted at Pitt—PCC will officially go smoke-free Aug. 14, two days before the 2018 Fall Semester begins.

PCC Student Support Manager Amelia Bain says 57 of the state’s 58 community colleges have at least some type of smoking policy in place. While 42 are tobacco-free and 13 partially smoke-free, she says PCC will be one of two institutions that are completely smoke-free. Only Lumberton’s Robeson Community College has no smoking regulations.

Bain said that while PCC won’t be tobacco-free, the new policy does cover cigarettes, e-cigarettes, cigars, little cigars and vaping.

“The task force that developed the new policy felt it was important for e-cigarettes to be included,” she said. “E-cigarettes often appeal to youth, because they are flavored, yet they are filled with harmful chemicals, like benzene. Some of these chemicals are even found in secondhand smoke from an e-cigarette.”

As social acceptance of smoking declined, PCC smoking policies were adapted to keep up with the times. For much of the college’s 57-year history, it was common for employees to smoke in their offices. But in 2009, when Pitt received its first Tobacco-Free Colleges Grant, the practice was limited to outdoors and at least 25 feet from building entrances. For the past seven years, smoking at PCC has been permitted in designated areas only, such as smoking stations and specified gazebos.

The movement to go smoke-free got underway in the fall of 2016, after the college received a $7,500-grant from the Truth Initiative: Inspiring Tobacco-Free Lives, an organization committed to achieving a culture in which tobacco is wholly rejected by youth and young adults. The funding led to an informational campaign about the perils of smoking and the creation of a 10-member task force to study the issue at PCC.

Bain chaired the task force, which included representation from faculty, staff and students as well as the Pitt County Health Department and East Carolina University. She said PCC students and employees were surveyed and most favored the college going smoke-free. As a result, the task force submitted a smoke-free policy proposal to PCC Trustees last year and it was ultimately approved in December.

The new policy prohibits smoking by students, employees and campus visitors in all campus buildings, college facilities and property owned, leased or operated by PCC, including college-owned vehicles. It also restricts the sale and/or free distribution of tobacco products, including merchandise, on campus and at PCC events. Student clubs and organizations are not allowed to accept money or gifts from tobacco companies under the policy.

Efforts to spread awareness of the smoke-free policy began several months ago. Bain said the college also hosted a pair of educational sessions for students on the effects of smoking and cessation options that were led by the Pitt County Health Department’s Allyson Moser.

In addition to removal of several gazebos, Bain said preparations for the policy change have included signage at campus entry points and entrances to campus buildings. The PCC Human Resources Department has shared information on smoking cessation with college employees, she said, adding that PCC publications will be updated to reflect the new smoke-free policy.

Bain said an event to kick off the new smoking policy and celebrate a healthier PCC will take place Aug. 20 during the “PCC Week of Welcome.” She said the task force will be monitoring compliance with the new regulations and send out occasional reminders to ensure the PCC community is aware of the smoking policy.