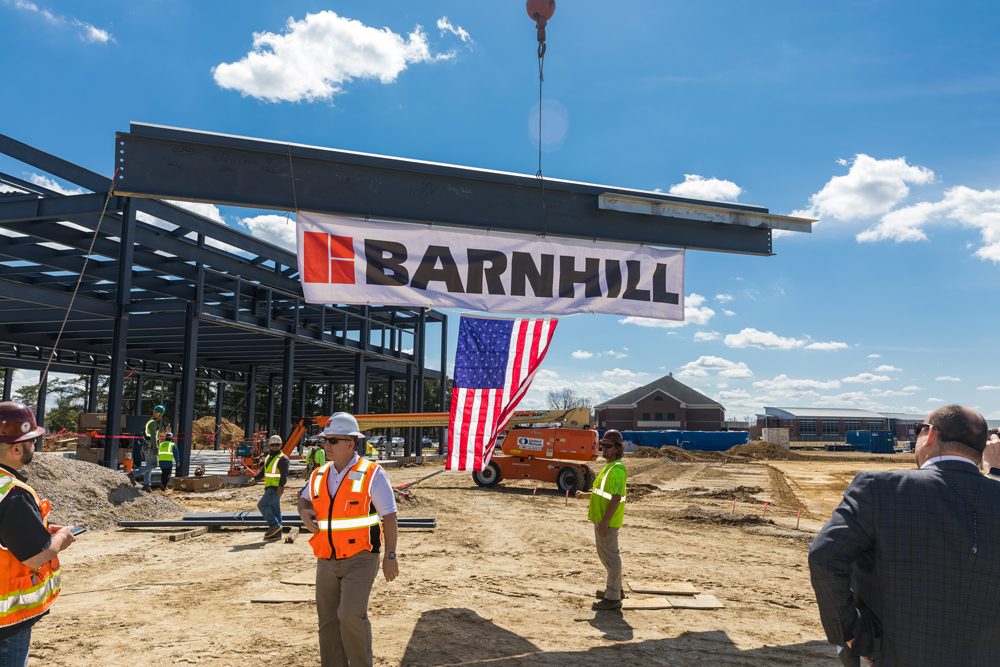 The event, a time-honored tradition among builders, took place Tuesday afternoon at the Smith Center construction site on PCC’s main campus. It gave many of the individuals responsible for the building’s creation an opportunity to sign the final steel beam for posterity.

“This piece of steel symbolizes a major milestone for the project in the completion of the building structure and lends to a bright future ahead for the students and staff that will be utilizing this new facility,” said Arthur VanderAa, senior project manager for Barnhill Contracting Company’s Eastern Building Division.

VanderAa said the ceremony was made possible by the commitment shown by everyone involved with the Smith Center project.

“This project, like many, has faced multiple challenges along the way, from the volatile fluctuations in the market due to COVID-19, to project redesign and re-bidding,” he said. “But, unlike many projects that were either shelved or canceled, this project pushed through with the perseverance and collaborative effort held between Pitt Community College, the (North Carolina State Construction Office), MHAworks and Barnhill, along with the hard work and dedication of the entire construction team ….”

One of the building’s key proponents, Grady-White Boats owner Eddie Smith, attended the ceremony. Smith made a significant contribution to the student advancement center project several years ago to secure naming rights. He has also funded the PCC VISIONS Career Development and Scholarship Program since 2004, when he helped start the initiative as a way of reducing the dropout rate among Pitt County high school students.

In addition to putting his signature on the steel beam, Smith signed for his late wife, Jo Allison, who passed away in 2020, and his late son, Chris, who died last year. The center will be a special place for Smith for years to come, as it will feature he and his wife’s names on the facade, a multipurpose room named for Christopher B. Smith, and a home on the second floor for VISIONS.

At a cost of just over $14 million, the Smith Center is going up across the street from Pitt’s A.B. Whitley Building, adjacent to where Tice and Reedy Branch roads intersect with Warren Drive. The 28,000-square-foot structure will house a variety of student services, including a Veterans Center, and PCC’s Institutional Advancement Division, which includes the PCC Foundation and the college’s marketing and media relations departments.

PCC President Lawrence L. Rouse said he is looking forward to the day the Smith Center is open for business.

“There’s a saying that anything worth having is worth waiting for, and that certainly applies to our future Eddie & Jo Allison Smith Center for Student Advancement,” Rouse said. “This building has been in the works for some time and we’ve crossed a number of hurdles in getting to the point this steel beam can be moved into place, but it’s been well worth it.

“This center is important to PCC’s future, because it will play a pivotal role in our ability to serve students and develop partnerships and generate resources that make college possible for everyone wanting to better their life’s circumstances through higher education.”

The majority of funding for the Smith Center’s construction has come from a PCC Foundation capital campaign and the NC Connect bond North Carolina voters approved in 2016. Work on the building began in October 2021.

In the months since, VanderAa said approximately 10,000 man-hours had gone into preparing the site and establishing the facility’s foundation and framework. He said more than 600 cubic yards of concrete had been poured at the site and 306 tons of structural steel erected.

The Smith Center project is expected to be completed in early 2023.