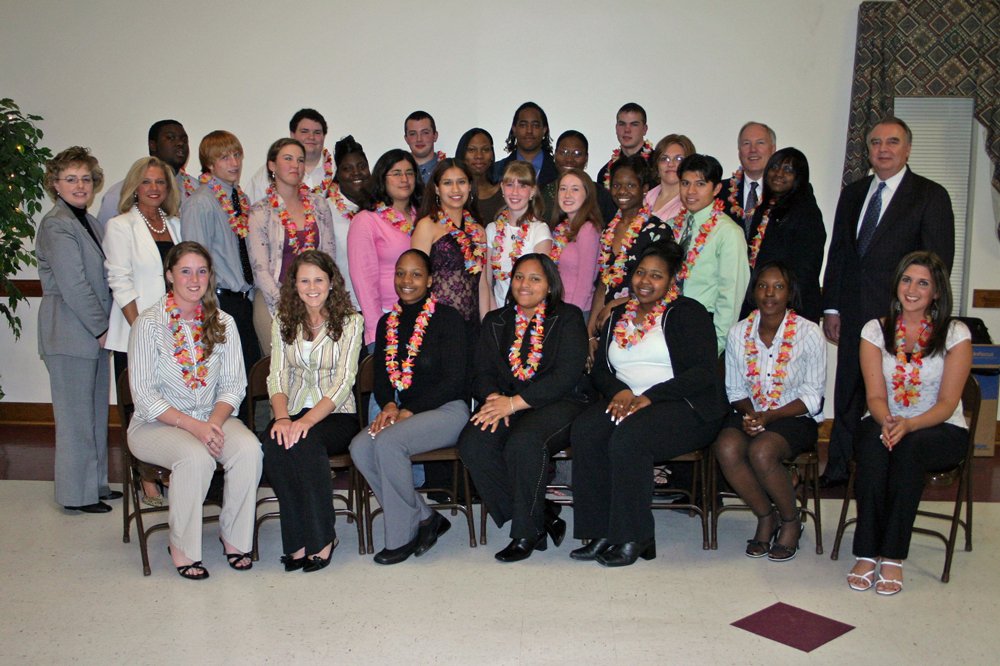 WINTERVILLE—Pitt Community College and Pitt County Schools recently celebrated the success of a pilot program that gives some of the county’s high school students the direction and support they need to obtain diplomas and seek higher education.

Started a little more than a year ago, the VISIONS Career Development and Scholarship Program was developed by the Greater Greenville Community Foundation, PCC Foundation, Pitt County Schools and the Eddie and Jo Allison Smith Family Foundation.

Eddie Smith, owner of Greenville’s Grady White Boats and the VISIONS benefactor, proposed the development of the mentoring program, which aims to reduce Pitt County’s drop-out rate while increasing the number of county students attending college. Each of the 27 students participating in the program this year were exposed to job opportunities and options available to them at the community college level and have been awarded scholarships to attend PCC.

“Out of each 100 students entering the ninth grade in Pitt County Schools, only about 70 will graduate,” PCS Superintendent Dr. Michael Priddy told students, parents and program supporters during the May 5 celebration. “And of those 70, only about 20 will go on and acquire post-secondary education. Even though that is better than the state averages, it is unacceptable in today’s economy and today’s world.”

A driving rain that fell outside the Shrine Club where the event was held, provided a fitting metaphor for what life could have been for the students without VISIONS – tough going due to limited visibility and reduced traction.

“The VISIONS program,” said Priddy, “creates the kind of understanding and hope that will allow this group as well as many more groups, I hope, to embark upon the next phase of life with the abilities necessary to be successful.”

PCC President Dr. G. Dennis Massey assured the students that college employees would work side-by-side with them in the years ahead to ensure that success. “Be optimistic about your chances, work hard, and we’ll be your partner,” he said.”We want to see you succeed.”

Once students reach the PCC campus, they will be counseled by VISIONS Program Coordinator Debby Gray and Gene Hemby, the program’s advisor.

“Two years from now, I want to be able to invite back all of your parents and I want 27 of you back in here again ready to graduate from Pitt Community College,” Hemby told the group. “That would be the most remarkable thing I think that has ever happened in Pitt County education if we can do that, and that is my goal.”

Because of the hard work this year’s group demonstrated, Melissa Spain, director of the Greater Greenville Foundation, said the VISIONS Program would continue. “It will be a program for many years to come,” she said. “Students will follow behind you in your footsteps, and who knows where this will go from here.”

Due to the success of this year’s class, Smith has increased funding for additional students to participate in VISIONS. Already, 46 high school students have signed up to take part in the program next year.

All VISIONS students are selected during their junior year of high school. They participate in a weeklong summer institute in which they focus on career exploration, and each student receives special mentoring and advising throughout his or her senior year.