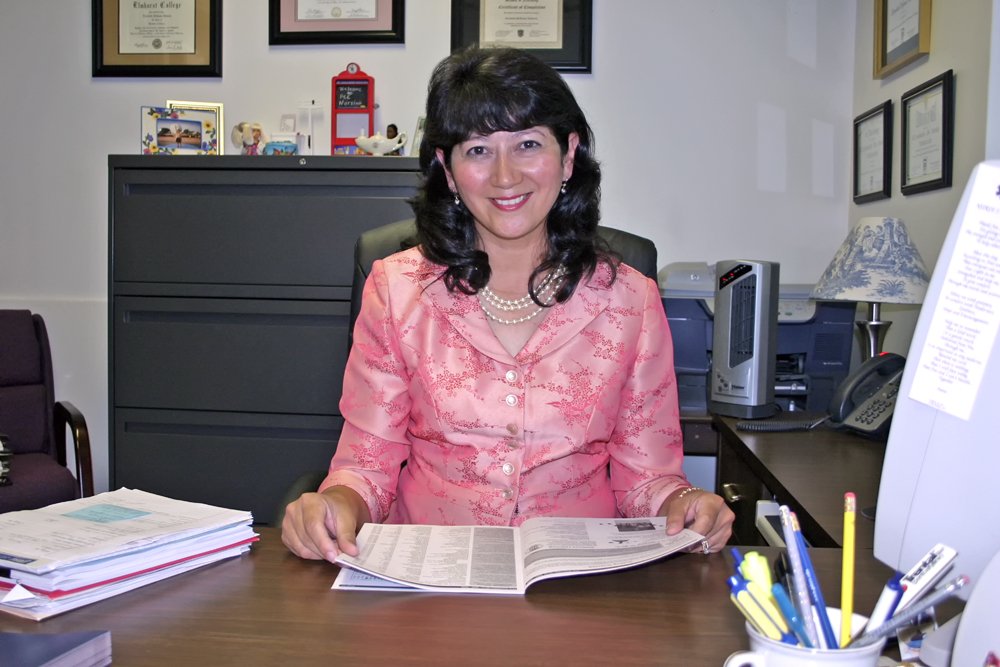 WINTERVILLE – Not even the long hours and stressful conditions that come with the job can keep Pitt Community College’s Elizabeth De Jesus Toderick from beaming when she talks about her beloved nursing profession.

“I really have a passion for anything that has to do with nursing,” explains the 46-year-old Toderick. “I couldn’t imagine being anything other than a nurse; it is who I am.”

In June, PCC administrators named Toderick to replace the retired Carla Lewis as the college’s Director of Nursing. It was the result of a lifetime of hard work by the daughter of Midwestern factory workers who called her parents her role models.

“Who I am is a good representation of my parents,” said Toderick, explaining that even though her mother and father didn’t know English when they arrived to the United States from Puerto Rico, they adapted to their new surroundings. They also set an excellent example for their five children by their tremendous work ethic and commitment to education, she said.

That work ethic will guide Toderick in her new role at PCC. She is excited about the opportunity to direct the college’s nursing curriculum and is eager to build upon the program’s success.

“I absolutely love Pitt,” she said. “What our (nursing) students can accomplish in two years is absolutely amazing to me.”

Six years in Greenville haven’t erased Toderick’s Chicago accent. “People still ask me where I’m from,” she says with a laugh.

Toderick was born and raised in “The Windy City,” received her nursing training there at St. Anne’s Hospital School of Nursing, and later completed her bachelor’s degree in nursing at Elmhurst College. She is still an avid Cubs fan, who says her favorite all-time player is “Mr. Cub” Ernie Banks.

And while she longs for the museums, concerts and other cultural activities her former hometown offers, she misses her family members still living there most of all.

But Greenville is home for Toderick these days, and she couldn’t be happier. “I love Greenville,” she says emphatically. “Everything I need is here and I have felt very welcome from the start.”

After marrying Lee Toderick, an East Carolina University Technology Systems instructor, in 1998 and moving to Eastern North Carolina, Toderick accepted a position as an oncology nurse with Pitt County Memorial Hospital. She also began working with PCC as a part-time clinical instructor, which lead to a full-time teaching position in nursing.

To learn more about Pitt and the community, Toderick signed up for numerous college committees. “I knew this was going to be home, so I decided to jump right into my new environment,” she explained, adding that she “fell in love” with the school’s commitment to its students, faculty, staff, and community.

As a PCC nursing instructor, Toderick enjoys helping students reach their goals. “For many (students),” she said, “this is where their dreams come true.”

Toderick pointed out that Pitt nursing graduates are heavily recruited and finding employment due to the nursing program’s excellent reputation. And as Eastern North Carolina and the nation face a nursing shortage, she said, employment opportunities will continue to await PCC nursing graduates.

Asked the qualities possessed by a good nurse, Toderick didn’t hesitate in saying compassion, dedication, and strong values were the key ingredients. “At the end of the day, it’s about serving the patient,” she said.

Away from the classroom, Toderick says she enjoys reading anything she can get her hands on, sailing, dancing, and spending time at her riverfront cottage in Belhaven.

Toderick is also active within the local Hispanic community and serves as vice president of the local chapter of the National Association of Hispanic Nurses. The organization is committed to recruiting Hispanics into the nursing profession and addressing disparities in healthcare within the Hispanic population, a topic Toderick researched while completing her master’s degree requirements at ECU.

Elizabeth lives in Greenville with her husband and her 13-year-old son, Eric, a rising eighth-grader at St. Peter’s Catholic School. She has three stepchildren as well, Vincent and Shawn – who live in New Bern – and Jennifer – who lives in New Jersey.