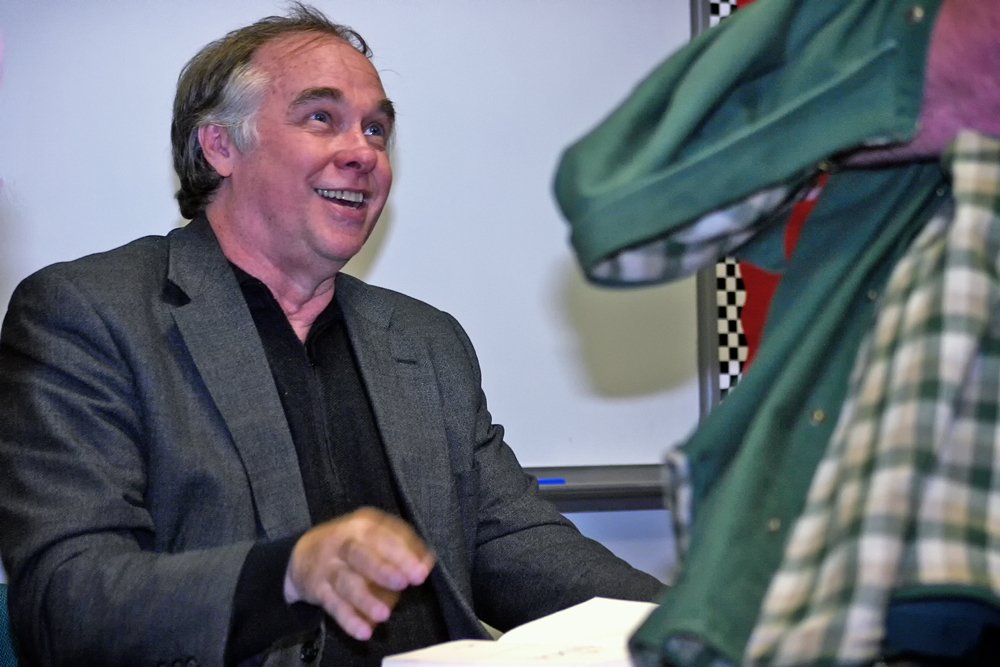 WINTERVILLE—North Carolina writer and cartoonist Doug Marlette recently spoke to Pitt Community College students and employees about the inspiration and creation of his first novel, the acclaimed fictional work, “The Bridge.”

Marlette’s appearance marked the culmination of the college’s One Book Project, which is part of a nationwide effort to encourage community-based reading. PCC has held numerous discussions and programs this semester in relation to Marlette’s book, and everyone on campus was encouraged to read it.

“I love being here,” Marlette said following his appearance at PCC on April 28. “The school’s great; this is a great crowd. I’m amazed at the number of people who showed up in the middle of the day.”

Indeed, a full house turned out to hear Marlette speak. They were treated to the Pulitzer Prize-winning cartoonist’s humorous recollections of his upbringing and personal insight into his creation of “The Bridge,” which was published in 2001 and praised as “best fiction” a year later by the Southeast Booksellers Association.

Wearing a black polo shirt and charcoal sport coat, the Greensboro native told the audience he had never intended to become a writer, that cartooning had always been his “escape from the madness” of a strict upbringing in which “success was a crime punishable by death.” Ironically, Marlette’s “Kudzu” comic strip character sought to be a writer at least 15 years before he did.

But the “impulse” to write eventually consumed Marlette much like the desire to draw comic strips had earlier in his life. “I wanted to see if I could do it, basically,” he said.

“The Bridge’s” storyline arose soon after Marlette moved into a historical Hillsborough home and began a journey into his family’s history. When he discovered that his predecessors had played a pivotal role in a major mill strike in 1934, the foundation for “The Bridge” was formed.

In “The Bridge,” Marlette details Southern textile strikes and mill closings. One of the book’s main characters is based on his grandmother, “Mama Gracie,” an intimidating woman he referred to as a “blue-hair Ayatollah” during his PCC speech.

Through his research for the novel, Marlette learned “Mama Gracie” had been bayoneted by a National Guardsmen during a mill strike in Burlington. When he mentioned this to UNC-Chapel Hill researchers and told them his grandmother was Gracie Pickard, they were astonished.

“It was like telling them I was Elvis Presley’s illegitimate child,” he said, explaining that Pickard is “a heroine” to textile historians.

According to Marlette, “The Bridge” may one day hit the big screen as Paramount Pictures has plans to make it into a movie.

As for Marlette, he is nearing the release of his second book, “Magic Time.” Marlette says the book is set in 1964, when he lived in Laurel, Mississippi during what he calls the “bad ol’ days” of violence stemming from the Civil Rights Movement in the South.

All in all, Linda Leighty, PCC Library director of learning technologies, was pleased with the college’s One Book efforts and was delighted with Marlette’s appearance. “I thought his visit was extremely successful,” she said. “He charmed the audience, which was a nice mix of students, faculty and staff.”