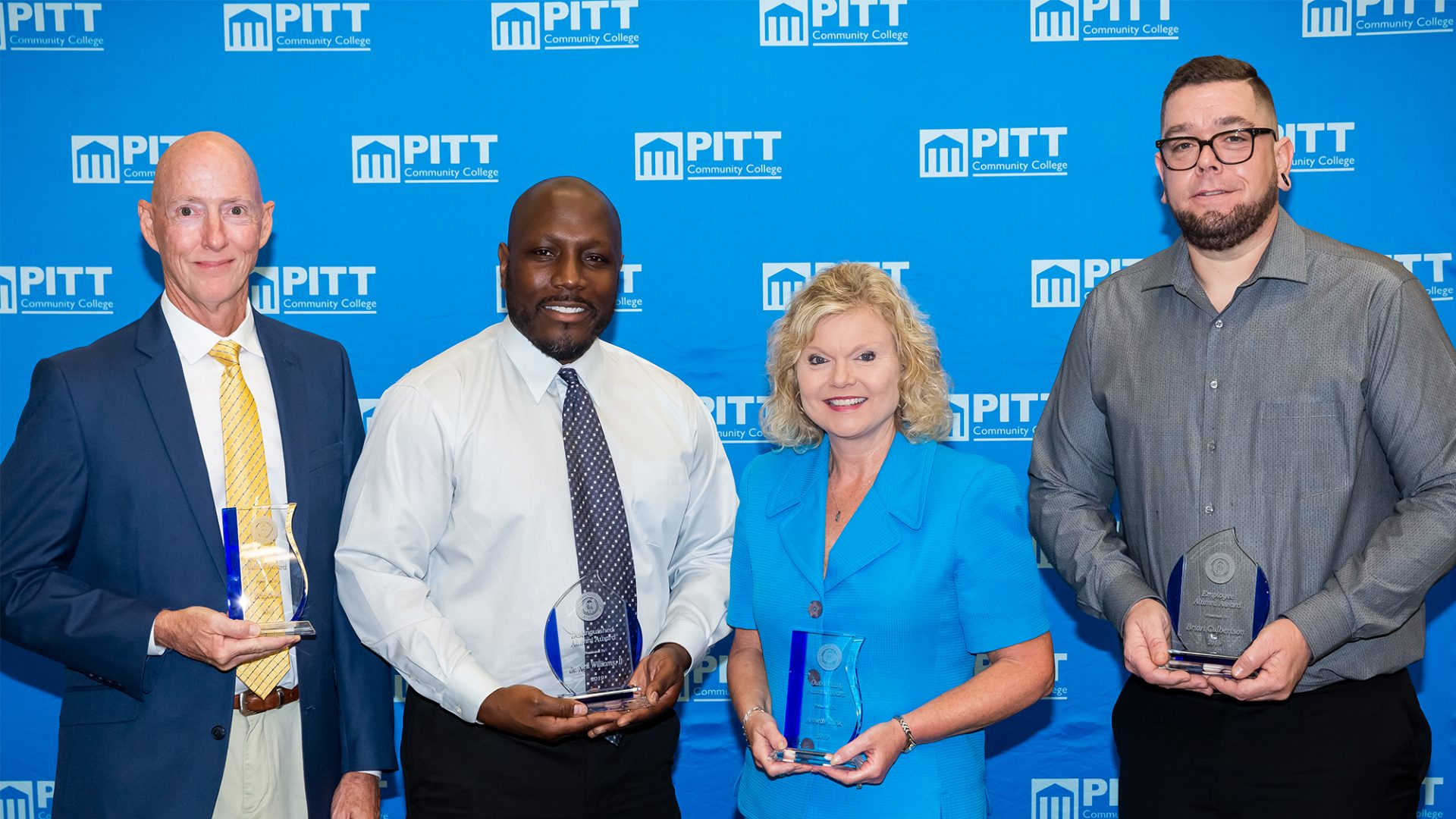 The program, which took place Oct. 15, featured the presentation of a Distinguished Alumni Award—PCC’s most prestigious—to Neil Williams II, Outstanding Alumni Awards to Eric Deal and Annette Turik, and an Employee Alumni Award to Brian Culbertson. The honorees were selected based on criteria established by the PCC Alumni Association Board.

Williams, a Winterville resident, is a 1998 Associate Degree Nursing graduate. He’s also earned a master’s in nursing from Walden University and a Doctorate in Nursing Practice from Gardner-Webb University.

In addition to serving as Vidant Medical Center’s patient care coordinator since 2010, Williams is an assistant adjunct professor with the East Carolina University (ECU) College of Nursing. He is a member of several professional organizations and has received numerous awards for his work, including the “North Carolina Great 100 Nurses Award” in 2013 and Vidant’s “2012 Working Parent of the Year.”

PCC Nursing Instructor Pamela Dail nominated Williams for his alumni award, citing his achievements as a health care professional and impressive community service contributions. She said she first met Williams in 1991, when he was one of her students, and she recalled that his ability to interact with classmates and deliver effective patient care set him apart from others in the nursing program.

“Dr. Williams gives unselfishly as a volunteer to youth and teens in the community,” Dail said. “… He is an amazing asset to the field of nursing as well as the (PCC) Health Sciences Division.”

Deal, a 1997 Industrial Management Technology graduate, is director of plant operations for Greenville’s Cypress Glen Retirement Community. He was nominated by PCC Public Services & Fine Arts Dean Dan Mayo, who has known Deal since they were first-grade classmates.

Though Deal’s PCC academic career got off to a slow start – he was more interested in hunting and fishing than the classroom – he eventually realized formal education was the key to his future. When he enrolled at PCC for a second go-round, he excelled.

Prior to Cypress Glen, Deal spent 27 years producing high-performance filtration products with Flanders Corporation. He began as a quality assurance manager and finished as a corporate vice president.

“(Eric) is very modest about his career accomplishments, but they are numerous and on a scale that only few can claim,” Mayo said.

Turik, a 1986 Paralegal Technology graduate, has more than 33 years of experience in the field of law. She’s been a courier, paralegal and attorney and is presently serving as a judge in North Carolina’s 8th Judicial District.

In a 2016 article for PCC’s Career Focus magazine, Turik said she decided to become a lawyer when she was in third grade. “My teacher told me that as much as I stood my ground and argued my point on everything that I would be good at it,” she recalled.

A Kinston native, Turik worked full-time as a paralegal after graduating from PCC to put herself through the criminal justice program at N.C. Wesleyan College and law school at N.C. Central University. After earning a Juris Doctor, she worked as an attorney for Wallace, Morris, Barwick, Landis and Stroud before starting the law firm Wooten and Turik in 2003.

Turik has fond memories of PCC and says her “paralegal degree was the stepping stone” she needed to be able to work in the legal profession while pursuing her dream of becoming a lawyer.

Culbertson is a part-time instructor with PCC’s Associate in Fine Arts (AFA) program, which was established in 2009. He became one of the program’s first graduates in 2013 and went on to earn bachelor’s and master’s degrees in Fine Art Photography with honors from ECU.

Charity Valentine, AFA coordinator and Culbertson’s supervisor, nominated Culbertson for his alumni award, calling him a “talented artist” and noting the “critical” role he’s played in the AFA program’s growth. She first met Culbertson in 2011, when he enrolled in one of her photography courses.

“When (Brian) … took that very first photography class almost a decade ago, it changed the trajectory of his future,” Valentine said. “He became a part of our community, and I cannot tell you the joy it brings me to see him telling his story to students and encouraging them to keep going.”