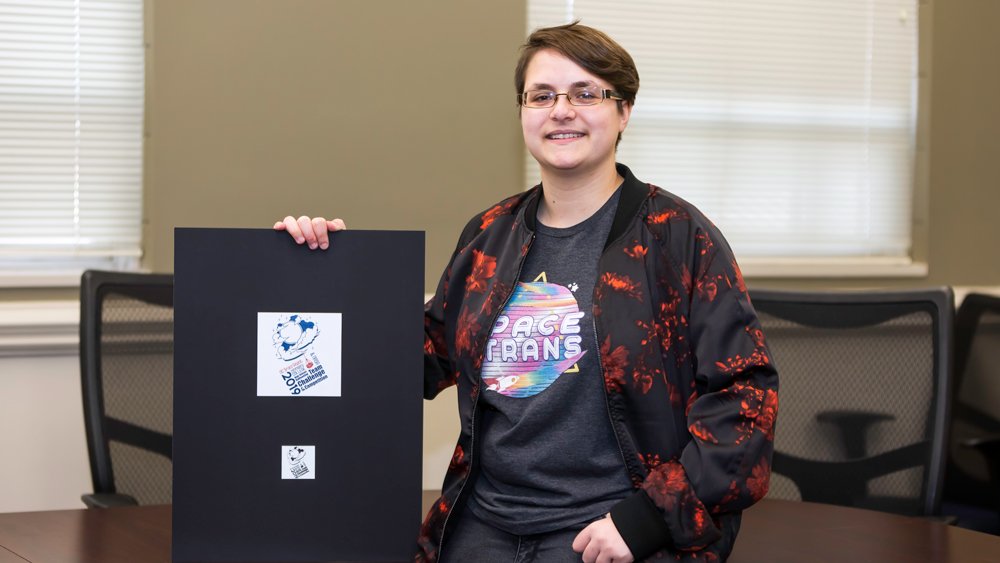 WINTERVILLE—When teams from seven North Carolina community colleges gather in Lenoir this spring for the annual high-altitude balloon competition, every participant will have at least one thing in common with Pitt Community College: their t-shirt logo.

That’s because PCC Advertising and Graphic Design (AGD) student Max Hamilton submitted the winning logo design for the 2019 Community College High-Altitude Ballooning Team Challenge and Competition. For his efforts, he will receive a $500-stipend from the NC Space Grant program, and his design will be used on t-shirts, posters, flyers and/or stickers, as well as in social media and for other promotional purposes.

“I found out I’d won last month,” Hamilton says with a smile. “I saw a message in an email notification on my phone in between classes and was flabbergasted. I was like ‘no way,’ as I was reading through it.”

A second-year student from the coastal town of Aydlett, Hamilton is pursuing a career in freelance illustration and is already creating designs in his free time. When he graduates from PCC in May, he plans to seek a four-year degree in illustration.

Until then, Hamilton is making the most of his time at Pitt. His performance in the classroom and service as communications officer for the Advertising and Graphic Design Club and as co-president of the Gay-Straight Alliance – a group he helped reestablish at the college in the fall of 2018 – have resulted in a PCC Academic Excellence Award.

Winning the logo design competition has been somewhat of a defining moment for Hamilton.

“It shows me that I have come a long way since starting the Advertising and Graphic Design program and that I can keep going a long way,” he says. “My work being recognized shows me I can do this. I can do something I love and have my designs become reality.”

“These types of assignments are great opportunities for students to get real-world experience working for an actual client,” said AGD Department Chair Eleanor Willard. “I am thrilled that one of our very own—competing with students from many other community colleges across the state—won the competition.”

To create his winning design, Hamilton combined his love for drawing clouds with a graphic style similar to that found in what he called “nerdy comic book culture.” He also considered guidelines set by contest organizers regarding size, shape, color and theme and ended up with a dark blue-and-red logo depicting a weather balloon and payload soaring through the atmosphere.

Hamilton said including “NASA/NC Space Grant” and the competition’s full name in the logo was particularly challenging. As a result, he kept his layout simple to ensure colors didn’t clash, type was legible, and graphics didn’t get “tangled up” with text.

Hamilton’s logo creation will be on full display during this year’s balloon competition, which will take place April 13 as part of the NC Gravity Games. It will be the fifth time the event has been held and fourth time PCC has participated.