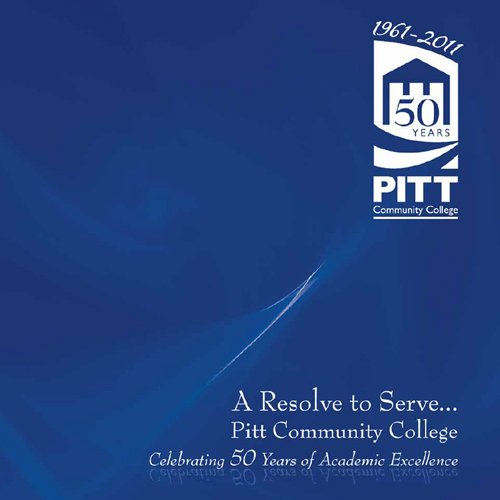 Pitt Community College celebrated its 50th Anniversary in 2011. To commemorate the historic occasion, the college created and published a book, “A Resolve to Serve … Pitt Community College: Celebrating 50 Years of Academic Excellence,” with help from local historian, Roger Kammerer.

The 158-page volume details the first five decades of PCC’s service to Pitt County and the region with photos and highlights of the people, programs and services that combined to turn Pitt Industrial Education Center into one of North Carolina’s largest community colleges, between March 2, 1961 and March 2, 2011.

Media Relations Director Rob Goldberg Jr. and former Marketing Specialist Gretchen Baugh were responsible for the contemporary photos shown in this publication. Marketing Director Jane Power designed and produced the layout for the book. And last, but certainly not least, no book is complete without proofing, and for that, we thank Betty Foreman, Gene Hemby, JoAnne James, Dennis Massey, Susan Nobles and Jane Power. Some notations are from news archives and governmental records, while others are activities and history, as remembered by those who lived it.

We are thankful and excited to have been involved in a part of Pitt Community College’s history. We hope you enjoy learning more about PCC!